Yesterday I published a post saying that the MPPP was calling for a request for proposals for three lots of land near the Gurney Drive roundabout – though I wasn’t sure then of the precise location of those lots.

Today I can confirm the precise location of the three lots. Two of them – Lots 1011 and 1373 – are covered by the white space above. It is possible that a large high density commercial or mixed development complex will spring up in that area perhaps to rival Gurney Paragon or other similar complexes.

As you can see the white space covers parts of the existing main roads.

In all likelihood, any new large project will aggravate the congestion on the roads in this popular shopping, recreational and culinary section of Gurney Drive.

The MPPP must clarify if it plans to turn this entire area of Gurney Drive into a commercial concrete jungle.

The third lot – Lot 2882 – is opposite Gurney Plaza and Gurney Paragon, on the other side of Kelawei Road, in an area which is already filled with high density projects (see below). 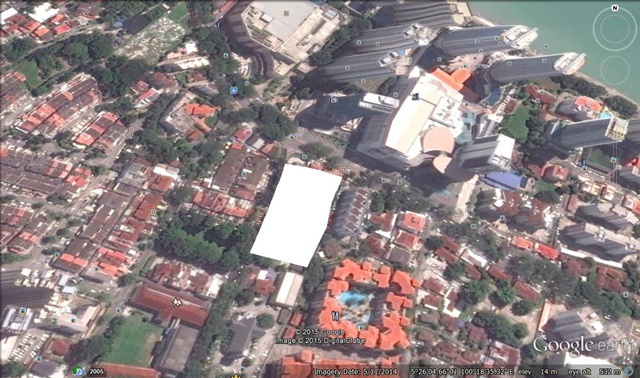 Why aren’t these precise locations for the requests for proposals being made public? Is the public to be presented with a fait accompli after the MPPP and developers have sealed their deal?

You really need to wonder about the focus of the government in Penang. Surely you need to focus and attract investment that will give us the jobs and income in order to spend money on condos and shopping?? There are not enough high paying jobs in Penang so focus on getting our income levels up otherwise its just a property bubble as there is no sustainability. It seems they are ONLY taking the easy option on having a property led economy (but with huge long term problems). What we need is a couple of landslides (with no damage to people… Read more »

Landslide can unnaturally happen when some people are too frustrated with recent development to create the mishap?
The usual suspects are there in this blog?

The quest for Cosmopolitan Penang gone wrong? Was there any in-depth thinking to create a place where everyone (not only the rich) can live, work, play and relax so as to call Penang ‘my home’ and not reserved for the ‘My 2nd Home’ foreigners? It looks more like a quick-fix rush to Cosmopolitanize the state using developers’ financial clout but at the developers’ T&C of no-question-asked. Build first, then figure out how to sell at sky high prices (justified by drunkard property gurus and kia-su fear-inspired property market projection) in the absence of an integrated transportation network, adequate breathing green… Read more »

Some figure out that and have moved to better environment in mainland BUT businesses stay put on the island to earn $ from bin chui obsessed folks.

And don`t waste your precious space here. It should have been deleted.

We tried our luck with this CAT, but ended up the losers.
One Big Win for developers, One Small Saving for state fund, One Hell Of A Bluff to 308 voters.

Time to send this CAT back to Melaka on a Damacai horse.

No worry as Anil and many have expected bubbles to burst expedited by 1MDB fraud.

Gurney/Kelawai traffic problem to be resolved with expressways lining the present swampy coastline, with link to Straits Quay then tunnel to mainland. Present high rise condo sea view will be blocked by newer mixed development projects next to this expressway.
Recreational green parks can be created ala Spice people’s park.
this is robin hood cukai pintu strategy so that the poorer folks elsewhere can be subsidised e.g. education n senior folks to receive RM1k a year.
sounds logical?

Senior folks would not mind high density development so long as money collected by the government could be channelled towards their welfare, given that 80% retirees at 55 have very little in their EPF to sustain their remaining years.

May be private hospital to be built there to cater for the needs of obese Penangites?
In time to come, while stretch of Gurney to become pedestrian walkway and only electric tram to circulate the area. Mind my words.

Why I care for district Gurney? High concentration of the rich. Tax them with concrete and money collected to pay for Seniors in need of money!

Let us keep worshipping Development. The repeated disasters in economy, society and environment elsewhere to not apply because Bolehland is exceptional. This word exceptional is copyrighted by a certain superpower, but surely we are at least somewhat exceptional as our flag is similar.

I haven’t been to Penang For ages since I left the State During my time congestion was there By now I guess it becomes worst Gurney drive landscape has changed With high rise buildings surrounding it These have increased the vehicles density It is even worst during holiday season Now with the second Penang bridge More vehicles will drive in to Penang The island during my time then It was quite bearable to drive around Penang is in the blockage zone There isn’t much green to breathe With rapid developments in the State Luring who to come to stay? As… Read more »

I notice there’s river flowing next to the land. What’s the requirement when built next to a river? Set back 40ft? Maybe convert that river into a drain to avoid the 40ft set back? Or convert the river into a drain and build on top of the drain, like one of the apartment block at the foot of Penang Hill?

Another ‘Botak Hill’ in the making?
Sahabat Alam Malaysia wants MPPP to investigate another case of land clearing, this time on the hilly terrain of Gambier Heights. – See more at:

Excerpt: In the “Botak Hill” incident, a developer was found to have carried out illegal hill clearing on Bukit Relau. The developer was later fined RM30,000 after the council hauled up the company to court following a public outcry and the state government’s insistence that earthworks on the “Botak Hill” were carried out illegally. However, during last month’s hearing of the suit by Chief Minister Lim Guan Eng against social activist Jimmy Lim and FMT, defence counsel Baljit Singh informed the court that he had obtained a document on the Bukit Relau incident from a separate court case. The document… Read more »

Penang for sale: Come ye all for the sale of the century

Sing (apore) a song of six sen,
A pocket full of cash.
Four and twenty developers,
cooked the books again.
When the books were opened,
The developers began to sing (a pore);
Wasn’t that a lovely scene,
To set before the ……….?

Penang government should make them into parks. We need empty spaces!

Exactly my sentiments. In the 6 years PR has governed we have not seen a single new park that is over the size of 10 acres. The state govt must understand that parks can be enjoyed by everyone, the rich, the poor, the young and the old alike. It will improve the rakyat’s quality of life instantly. It need not even spend money to build parks. When a large development project is proposed, make it mandatory for developers to allocate 20-30% of the land for parks. Developers should be allowed to do business, to make profit but not excessive profit… Read more »

Most Penang folks own a car and can easily drive to Botanic Garden to escape the tension from congested city living?

Why is higher density along Gurney Drive to Batu Ferringhi a goal for this state government? Not everybody wants another Hong Kong.

Traffic congestion is also due to high car ownership.
Every household now has at least 2 vehicles.

Given Penang as the second largest city in Malaysia, its BOUND TO develop a high-density upscale commercial area..It can’t be Georgetown because its heritage status, so where do you propose Penang do it given the natural thing is to be close to Georgetown and other high-end enclaves?

I don’t mind high density high rise structures in Gney drive since there are already such buildings there. What I mind is that these lands are owned by the state govt/MPPP which means it should be used to benefit the rakyat. Example: Parks, hospitals, sports/recreational centres, public libraries, all of which are facilities provided in every residential area in Singapore. They are not unreasonable requests. They are very doable. We do not expect the state to build a menara wawasan/talest building in the world. Land owned by the state/MPPP is land belonging to the ppl and shouldn’t be given to… Read more »

Apparently, the state has included in the plans for STP2 a linear park along Gurney Drive. I agree with your points though.

Anil, you really believe a park will materialise? Even if it does, the plans show that a major highway will be running next to it. It will be more of a setback/land reserve for highways rather than a park. Soon, it will be used as a motorcycle lane like the current linear bicycle lane in front of The Light development.

Yes, there is that problem. How do you get across the highway to get to the park… overhead bridge?

Which gov approved?… Present or past?

The MPPP is coming up with a request for proposals now; so the project has not yet been approved.

Does the MPPP/state own the said lands? As far as I know, there are ppl currently occupying/using the area in white and I always assumed they were privately owned.

For your information, the state planning committee (SPC) is chaired by the Chief Minister. Any bit of development goes thru his CAT-scanning green eyes. So it is natural that MPPP has to follow ‘orders’ or else. Has he any heart for Penangites real needs? Has he any humanist vision for every Penangite? (One thing is certain without doubt – he has no real life experience being a Penangite, much less any altruistic passion for Penang’s unique positioning, cultures, heritage and maturing into the future) See for yourself the kind of brick + mortar development the last 7 years. Swap deals… Read more »