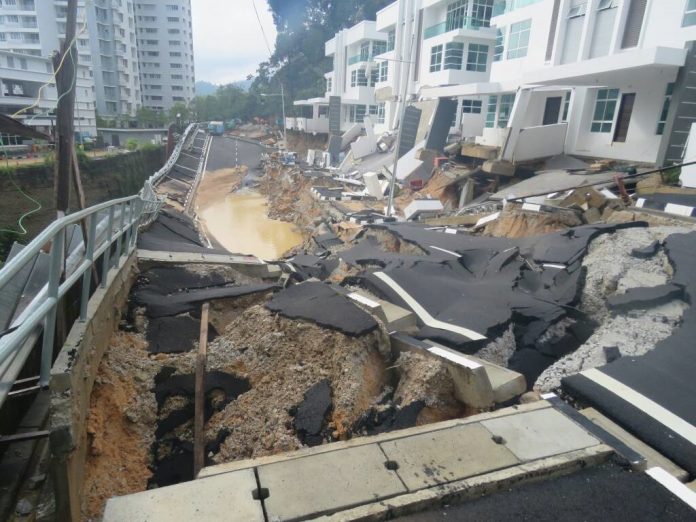 The Consumers’ Association of Penang and Sahabat Alam Malaysia are very distressed by the tragedy that has taken place yesterday and early morning today in Penang.

The floods, landslides and the disruption of people’s lives are even much worse than what happened on 15 September.

Yes – there was non-stop rain and very high winds, but the major factors causing this mega flood and landslides  have been the removal of the hill forests, silting of the rivers, and overdevelopment in Penang, which has replaced the green areas with concrete.

This has resulted in the heavy rainfall not being able to be drained because of the loss of trees and fields which act as a sponge absorbing the water and because the rivers and drainage system are clogged up by silt and cannot clear the rain water.

The following actions should also be taken:

Stop all work on hill slopes or on hill land irrespective of whether these lands and slopes are below or above 250 feet until a review is done on all projects and activities in these areas.

Stop all work that is being done on land areas adjacent to hill slopes or hill land which carry risks of erosion and landslides.

All approved projects on hill land and on land that has hill slopes, whether or not they are above 250 feet, should be put on hold, and they should be reviewed and extra measures should be imposed to ensure they are safe, and there must be strengthened enforcement to monitor these projects.

Stop the approval of all new projects on hill land and hill slopes and on land adjacent to hill slopes whether or not such lands are above 250 feet or not.

There should be no development on river reserves.

The state government has to have an overhaul of the way in which it undertakes state planning as well as planning and project assessment and approval process by the municipal authorities. They must put the interest of the people and the environment far above the interest of the developers.

The federal government must also play a major role.  It must allocate emergency funds for Penang to tackle the problems of risky hill slopes, landslides and floods.

SM Mohamed Idris is president of the Consumers Association of Penang and Sahabat Alam Malaysia.

Govt. must act? The mayor of KL reitrated that he “cannot” stop a land owner from “developing” land without “good” reason. Authorities at all levels are in the same capitalist/fascist boat, even if they are not so blunt.

The KL mayor gave some lip service to plot ratio. Since there is no “structural” plan, he is in facvt free to do what he likes. In Penang, there seems to be a plan but they still do what they like. Which is better?

Long live “cepat kaya” and the law of the jungle.

Is there a disaster relief agency? Answer is Yes. What is it doing. Has it issued any statement?

More opportunity for these:
(a) “I help you you help me” – no different from Mahathir holding Kelantan to ransom over lack of water/flooding/cholera
(b) the favoured political parties to dole out aid as if from themselves – remember petroleum dividend in Terengganu
(c) conmen, especially fund raisers – the issue died down after a flap about 5 years ago
(d) price gouging – the “free” market.

‘Only half of RM2.6b pledged spent for flood mitigation in Penang’

Putrajaya has admitted that only RM1.04 billion, or half of the initially planned RM2.57 billion, was spent on flood mitigation projects in Penang.

This is according to Minister of Natural Resources and Environment Wan Junaidi Tuanku Jaafar, in a parliamentary written reply dated Oct 30.

“Under the 5th Malaysian Plan to the 11th Malaysian Plan, the federal government had approved RM2.57 billion for flood mitigation projects in Penang, which involved new and ongoing projects.

CAT Gomen, you want more land development regardless of the fragile environment esp. the hills in order to earn maxi-profits to enlarge your dream coffers, justified by your Cosmopolitan Penang Frenzied justified by concocted population expansion justified by exemplary cosmo-places such as HK. Now, we Penangites are seeing the inevitable lashbacks from Nature, we are on the deadly receiving end. Your earned maxi-profits from such ‘misadventures’ with developers won’t be maxi-enough (not even the ‘kiam siap’ RM400 for flood victims) to compensate for the massive loss, loss of lives, inconveniences & loss of a wonderful living caused by the recent… Read more »

Viet flooded and 67 died from typhoon. Flood because Viet is orso cutting hills and building highrises?