Blog reader Ganesh was alarmed by what he stumbled upon at Gasing Hill the other day. 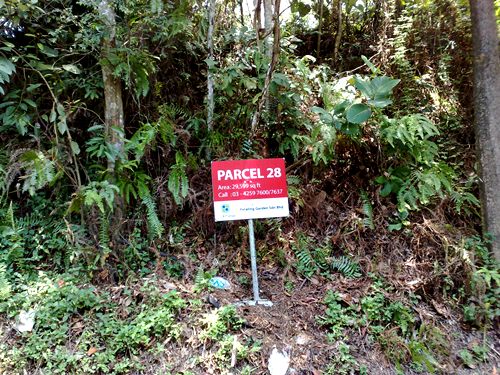 Ganesh shares with us what he discovered:

I saw plots of land being sold, starting from the bottom right up to the top, on both sides of the road leading to its peak.

This saddened me because Gasing Hill, for years, has been a green lung for residents of Petaling Jaya. Not only that, being the highest point in Petaling Jaya, it used to be a place to “get fresh air” and enjoy the scenery of the town below. Many people use it as a jogging path every morning, enjoying the fresh air and the natural surroundings of a beautiful “woodlands”/jungle.

Many parents often bring their children up Gasing Hill to feed the monkeys. In fact, this has been a weekly event for me as my three-year-old daughter is fond of feeding the monkeys.

The plots of land for sale go right to the peak. Each parcel ranges from 20,000sq ft to 30,000 sq ft, and there are about 60 parcels in total. I called the number on the board of a parcel and they confirmed that the parcels were for sale for people to build their houses. Coincidently, it costs RM150 per square foot – indeed for the rich and wealthy.

But the main question is this: how can Gasing Hill be sold? Who originally sold the parcels of land to the current seller?

Should not it be categorised as a “green lung” and belong to the government, and ultimately, the residents of Petaling Jaya in general?

Once houses are built, Petaling Jaya would be left with just one or two large green lungs only, namely Taman Aman, The Kelana Jaya Park and Taman Jaya.

I was under the impression that the government promoted a healthy nation and wanted people to exercise and be healthy.

With such green lungs being “raped”, it is no wonder we have more social problems. People, especially the youth, instead of indulging in healthy outdoor physical activities, are now indulging in indoor unhealthy activities, due to the lack of natural facilities available for physical exercise. Mind you, not everyone can afford the exorbitant fees of a private gym.

Meanwhile, a Joint Action Committee to save Bukit Gasing has already been set up.

Is the Gasing Hill under the jurisdiction of DBKL? If so, that will be too bad for the folk of PJ.

Hi everyone, Yes OES, I understand part of Gasing Hill in Section 5 is in KL territory and part of it in S’gor. If the parcelled lots for sale is in S’gor, then there’s hope that even when these lots are sold, development may not be allowed as I understand that the S’gor State Govt has banned development on Class III and IV hillslopes. Otherwise, if the land is in KL, then the residents need to petition the FT Minister, though as an UMNO minister, it may be business as usual. But, no harm trying rather than to sit-tight! Irrespective… Read more »

Thanks to Anil and Ganesh for highlighting this. What can we do? Time to rope in ADUN Edward Lee and MP Hee Loy Sian.

The Kelana Jaya Park is NOT a green-lung. It consists of 2 man-made lake, smelly and not well maintained. I always thought that Gasing Hill was gazetted. Din think that it will be sold. The Land Office has some explanation to do!