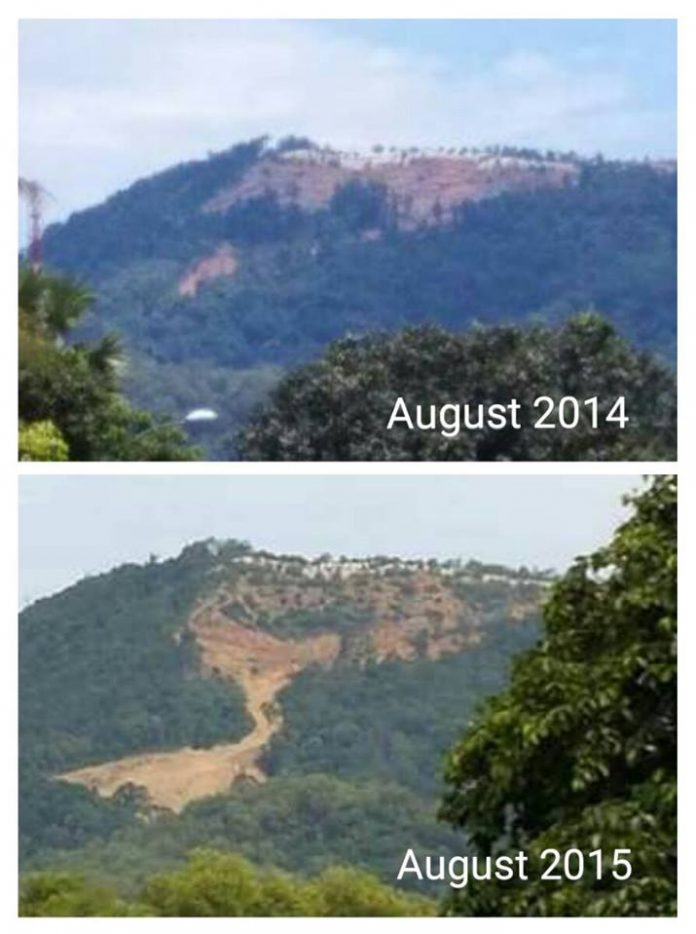 A few people had brought this worrying development to my attention. While there appears to be some regrowth at the summit of Bukit Relau, a large clearing has ripped up the mid-section of the hill. This looks like the result of rapid erosion or even a landslip.

Ironically, it was only this morning that US anthropologist Dr Gerrell Drawhorn reminded us of James Richardson Logan’s (1819-1869) concern about deforestation on Penang Hill and the impact it would have on climate change and flash floods. Apparently, the colonial government did not take him too seriously – though the degradation he witnessed back then was nothing like on the scale we have today.

I had blogged about what Logan had to say in 1848:

It was remarked that the whole of the eastern front of the range [of a mountain in Pinang] has within a few years been denuded of its forest…. In Singapore the present zealous Governor has, in an enlightened spirit … absolutely prohibited the further destruction of forests on the summits of hills…. Climate concerns the whole community and its protection from injury is one of the duties of Government…

Unless government will reserve at least the steeper mountain tracts, which are not adapted for permanent culture, there is nothing voluntary in the apprehension, for it has been realised in other localities, that in some prolonged drought after the naked sides of the hills have been exposed for a few weeks to the direct heat of the sun, every stream in the island will be dried up, and universal aridity ensue.

The great extent to which the plain of the mainland of Pinang has been shorn of its forest would of itself produce an urgent necessity for a stop being at once put to a war with nature, which must entail severe calamaties on the future.

Drawhorn was speaking at the Seberang Penang Lecture about Logan and his times.

Who was James Logan? According to the PHT website, he was “a lawyer, newspaper editor, a plantation owner, a philanthropist, a geologist, a climate change theorist, a linguist, a cultural evolutionary theorist, an explorer, and one of the first to collect cultural information on the orang asli. He was the editor of the Pinang Gazette and the founder and editor of the Journal of the Indian Archipelago and Eastern Asia, better known as ‘Logan’s Journals’. In addition, he was one of Province Wellesley’s largest landowners.”

It is incredible to think that someone had been concerned about the impact of climate change more than a century and a half ago. He was clearly a man ahead of his times.

Later I had the opportunity to check out a fascinating exhibition of old photos and postcards of Province Wellesley (yes, that is still the official name of mainland Penang) at a disused shophouse along Jalan Jeti Lama in the old Butterworth town centre of Bagan.

In the photo below Drawhorn is in the centre and Khoo Salma Nasution of the Penang Heritage Trust is on the left. 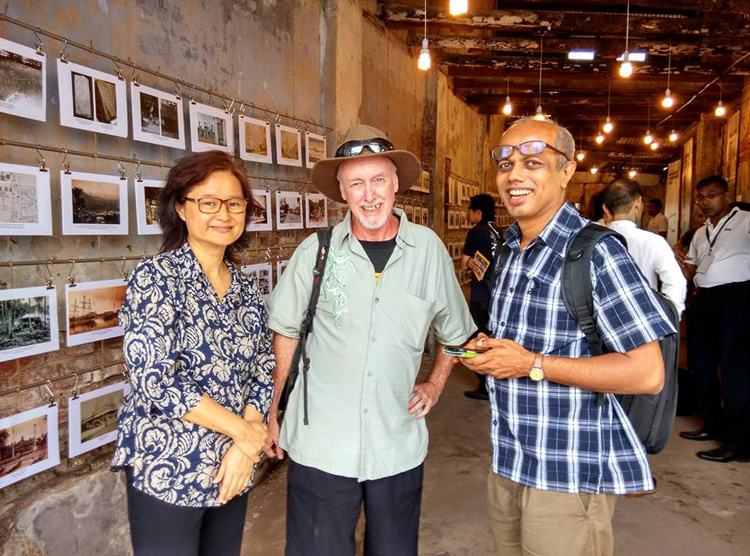 Some remarkable photos of old Province Wellesley as you have never seen it before. Tomorrow is the last day of the exhibition, held in conjunction with the Butterworth Fringe Festival, if you want to check it out. I hope the organisers can extend this exhibition until such time that the MPSP can make this a permanent fixture in Butterworth.

Province Wellesley badly needs a museum (or better still, one for each major town) and historical photo galleries to give residents a sense of pride of place and sense of continuity with generations past. This is especially crucial at a time when technology, crazy property development and materialistic notions of ‘development’ threaten to wipe out our social and cultural heritage.

Back to the fresh wounds on Botak Hill. What is MBPP and the state government going to do about it? By now, we know how the State Planning Committee surreptitiously approved the conversion of this land from hill land to housing in 2012.

We have to do more to protect our hills from those who are intent on profiting from them with scant regard to the damage they are causing to the rest of us and future generations as well.

Massive traffic jam at Bayan Baru and Bayan Lepas is a sign of high car ownership and low ridership in public transportation?
http://www.thestar.com.my/News/Nation/2015/08/17/Thousands-late-for-work-Penang/

Or is it a sign of the INCOMPETENCY of the Cat and State govt. Its been 7 years since they formed the govt and the ROAD CONGESTION is GETTING WORSE by the day. The greenery and environment is beyond recognition as the state govt go on a rampage destroying it for its fast track development. Anil above photo is one good example. Road, river and every where you go, its more dirtier than before. Our state is going the way of Haadyai or Bangkok as we see more of such illegal bars and vices areas that have sprouted up. Need… Read more »

Is there any indicator on the car density on Penang island?
How many cars per kilometer of road on the island?
I am afraid soon the island will suffer traffic choke as the number of cars is rising and not checked despite effort to encourage people to take RapidPenang.

Rapid Penang is wholly controlled, decide, run and total said by BN Gomen. The bus system still operate and run like mamak stalls. Many countries have real time and the timing can be found from the smart phone Apps

The writer is a blue-wave troll from MCA.
Anyway Malaysia Today is a site with no credibility.

DAP is now attracting malays, young and old, and Umno is very worried.

Mohd Shahrir bin Asri recounts why and how he joins DAP:
http://www.themalaysianinsider.com/sideviews/article/dap-and-i-mohd-shahrir-asri

Mr chairman deng’s quote. It does not matter 3k, 5k or less as long the CAT catch the rat. Dumno has 3M but needs billions in donation and they all have pea brains

I am a Malay and I support DAP, not the racist Umno.
Watch the speeches of Mat Sabu and many will convince that Umno has been deceiving the Malays with lies and imaginary bogeymen!

UMNO is harassing RaRa as she is able to sway young Malays to support DAP.

Don’t worry about that development lah, housing minister Rahman Dahlan has mentioned he is going to kill the development projects by all means. Soon everything in Penang will be at a standstill, preserved and intact lor !

This is what one former PM has done to our country and people for 22 years. (1) depreciation of the ringgit (2) lower standard of education & trying to destroy vernacular education (3) rampant corruption, crynyism and nepotism (4) racial polarization. (5) racial politics (6) mahadministration (7) forex exzchange loss of billions. (8) lies and half truths (9) the police state (10) hefty government debts & loss of hundred of billion (11) destroying the judiciary independency (12) ISA detention and operation lallang Now Cat senior is (allegedly) COLLUDING with UMNO and this former PM to go for his the former… Read more »

How come you don’t talk or write about the massive hill cutting besides Alila which will be Alila 2, 2 massive blocks of 34 and 33 stories condos.

Can you please tell us here. Dont push everything to Anil, he didnt collect a cent from all of us. Everyone should play a part to make Pg a better place. Tq.

YB only knows to direct lah

For God so love the world that he gave his only begotten son that whosoever believed in him should not perish but have everlasting life.

So you have got the ying and yang. Why keep fretting, the balance of everything

Want to talk karma, God or ying or yang go somewhere else. Don’t come here with cock and bull stories

The Cat is now.more interested in courting Umno. You’ve got the yang he gave you the ying the balance of everything. So.don’t.fret

Same, too much cats and dogs stories here after cock and bull. Soon with be tom and jerry follow by slyester and birdie.

No one is building anything there. I believe YB Chow has released a statement regarding this issue.

So give it time. Give one year and see how it goes.

Is there any update on the status of Penang Botanical Gardens?

5 Things You Didn’t Know About The Singapore Botanic Gardens

Is the land being developed for housing? Who is the developer behind this?

Also, the same problem seems to be ongoing on the mainland- very obvious “gap”on mainland coast, just south of first penang bridge- can be seen clearly from the pulau jerejak jetty (near Gold Coast condo). Any idea what’s going on there?

Would the Cat and senior give a damn. They are now more interested in courting UMNO

Anil, where is your iconic hat to blend in with the heritage ambience?

Haha I am looking for a new one!

Someone is courting the new DPM. He has a foster father. Maybe now has to be foster brother….

Is Anil showcasing his bald patch having being inspired by Arul Kanda?

Ask that entity which approved (silently or should it be secretly) of this Botak Hill development via illegal conversion of land use. The nature’s law of Karma is conjured up & there is no way of reversal. Let nature’s law of return takes its course. There will be nothing to hide bad deeds from public view, from the bottom up or from the sky. That recalcitrant bast. developer will have to pay the price, notwithstanding our land law of meekness. It’s Hungry Ghost Month, be very careful of your bad deeds, whether against man or nature. Pulo Pinang, an island… Read more »