After a heavy downpour in Penang, more havoc. This road collaspse is around 50 metres from the back door of the Tropical Spice Garden in northern Penang Island. Stress marks were spotted in 2015 along other stretches of the road further north in nearby Batu Ferringhi.

A landslide also struck the area at 5.30am. 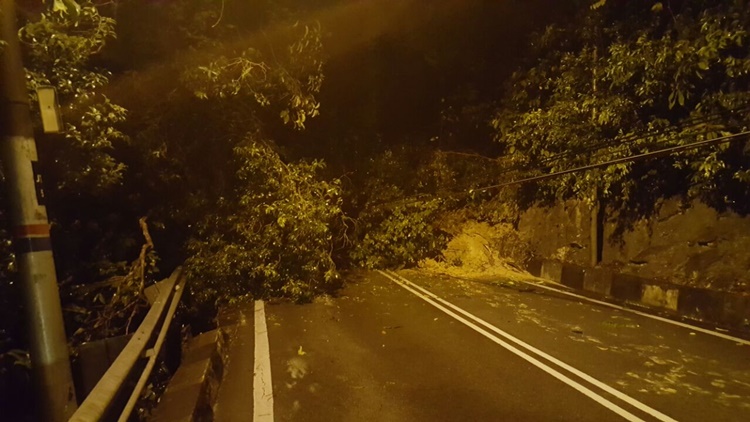 In the south of the island, homes and apartment blocks were affected by flash floods as water levels began rising at around 2am. The flooding before dawn also coincided with high tide at 4.10am.

GEORGE TOWN: A university environment specialist has dismissed the Penang government’s claim that extensive development in the state was not the cause of flash floods that happened three times in a week here.

On the contrary, said Professor Chan Ngai Weng from Universiti Sains Malaysia’s (USM) School of Humanities, it was rapid development and unscrupulous hillslope cutting that contributed to environmental degradation.

Chan, who specialises in environment hazard management, told the New Sunday Times that development in Penang was moving at a swift rate and flood mitigation measures were not prioritised.

“It is unwise to dismiss rapid development and hillslope cutting as the cause of flash floods.

“In fact, changing land use from green areas to urban built-up areas reduces permeable surfaces,” he said, taking the DAP-led state government and even the previous administration in Penang to task for “not doing enough”.

“These are certainly part of the reasons behind the slew of floods statewide.”

Chan said low-lying areas close to rivers were also undergoing rapid development, causing high rates of surface run-off that was not being absorbed into the ground.

Over-development at Iskandar Johor too?

I’ve just heard from a resident in Mt Pleasure area that there is another new cracking line along that area and looks like widening. Hopefully it won’t develop into a fatal disaster!

Penang flash floods due to UNCONTROLLED expansion in the state http://www.thestar.com.my/news/nation/2016/11/10/junaidi-control-development-penang-flash-floods-due-to-uncontrolled-expansion-in-the-state/ PUTRAJAYA: The recent flash floods in Penang are a result of uncontrollable development in the state, said Datuk Seri Dr Wan Junaidi Tuanku Jaafar. The Natural Resources and Envi­ronment Minister said that rapid development, especially along river banks, caused problems to the drainage system, which should have been looked into by the state government and local council. He said mitigation plans would not be adequate to prevent floods if development projects, along the banks in particular, were not controlled. “Instead of thinking about profit, the state government should have… Read more »

Flood mitigation Penang govt’s responsibility too, BN says http://www.freemalaysiatoday.com/category/nation/2016/11/09/flood-mitigation-penang-govts-responsibility-too-bn-says/?utm_source=feedburner&utm_medium=email&utm_campaign=Feed%3A+FreeMalaysiaToday+%28FMT+News%29 A look at the Federal Constitution however showed that drainage and irrigation matters were listed under concurrent legislation, which meant that both state and federal authorities were jointly responsible. Under Article 81 of the Constitution, financing of expenses (under the concurrent list) depended on the Federal Government agreeing to pay for it or the state government choosing to shoulder the burden. It read: “Financing of expenditure relating to matters on Concurrent List: 82. Where any law or executive action relating to any of the matters enumerated in the Concurrent List involves… Read more »

the giver can give peanuts or kfc finger licking good. one can meow or bark. one can always blame mt komtar

Now the rich of Tanjung Bungah area are facing dangerous environmental disasters.
Nature’s Anger has no favouritism, hesitation or skewed preference of where not to strike next.
Still don’t believe in Nagas? Go ride donkeys like a Jocky!

Q: Will the relevant authorities allow heavy vehicles to use the hill road starting from Sg. Pinang town to reach Teluk Bahang + Batu Ferringhi?
That winding hill road is more narrower than the affected Jalan Ujung Batu & more ‘sensitive’ to heavy vehicles like 10 tonnes lorries.
All it takes is one accident to render that hill road impassable to all traffic. Or worst, another road collapse.

Ask mata2. If someone knocks your 4wd, you go and see mt komtar??

To play the blame game (again) – now blaming lorries for carrying over max. loads that could have caused the deterioration of Batu Ferringhi Road is Absolute Vodka irresponsible. Why? 1) It shows a lack of comprehensive study (in the 1st place) before allowing massive development in the area with a narrow coastal road to begin with. 2) It shows zero monitoring & apprehension of lorries (breaking the law) & lorry hantu but indifferently allowing such dangerous precedents in spite of the fact. 3) It shows “Got Money Can Talk” takes priority over local Penangites’ welfare, regardless of social, financial… Read more »

As reported on NST today: Tropical Island Resort Sdn Bhd (TIRSB) has entered into a joint-venture agreement with Q Islands Development Sdn Bhd (QID), a subsidiary of Ideal Property Group, to redevelop the Jerejak Rainforest Resort & Spa and the 80 acres of land owned by TIRSB on the island. TIRSB said in a statement today that the redevelopment master plan, which will consist of a bridge linking Pulau Jerejak to the main island, has been approved by the Penang state government. The redevelopment will comprise 1,200 units of residential development, a marina, four- and five-star hotels, theme park, an… Read more »

Anil,
The new tram video the hokkien version you may get penanglang to do the voiceover?

Thanks for the suggestion. I will pasd your suggestion to the PF people.

KUALA LUMPUR, Nov 8 — Penang lawmakers have been requesting for RM350 million to carry out flood mitigation projects but the Natural Resources and Environment Ministry says it can only give RM150 million next year. Its minister, Datuk Seri Wan Junaidi Tuanku Jaafar, said many states also requested funds, including Kelantan, Terengganu and Sabah, from the federal government for the same purpose and none had received 100 per cent of what they asked. “So, if we give RM150 million next year. It’s still not a loss since the implementation of the project will not be immediate, like any other project,… Read more »

Swimming lessons should be made compulsory in Penang schools to equip the kids with survival skills in times of flooding, and to unearth future swimming champions along the way.

lucky pinang. plenty rainfall. no rationing like selangor shut down wtp. further down south linggiu dam will be like dead sea. good karma and fungshui. plenty of water or prosperiy coming in.

Developers should jointly form task force as CSR to rescue before an imminent landslide happening again!

There is only one very narrow road in Batu Ferringhi and it has been over 50 years old mann !
Luckily no untowards happening this very early morning or else…ask who to 滚蛋？ BUCG？

a crack happen many moond ago. so not surprise the road will fail onw day that was the day when water seeo through. lucky at odd hours. again by chance

The Nagas of the Hills, Seas & Skies have finally dealt Karmic blows after blows of relentless rains on Penang. For the price of Absolut Vodka CAT Arrogant is more than any innocent + patient flood victim can bear with loss of properties (4 times?) & loss of a good night sleep, 4 weeks in a row. As if anilnetto.com is foreboding Nature’s wrath on deaf ears + Cosmo-cement brains in the past months since last year, the arrogant minds at 28th Flr Komtar continued their recalcitrant behaviour preoccupied with more slippery development plans & tangoing to wealthy-not-enough-developers’ dreams with… Read more »

what vodka talking you?
Where got Naga here?
Use proper English, else people think you failed your SPM English.

Go to Absolut Vodka advertisements to get the gist!
Unless you’re brain dead of creative expressions!!!
Why you so dull???
You don’t believe in Naga? Come follow me to see the Bunians. Dare or not?

Penang SPM candidates endure different “test”, as floods wreak havoc yet again
https://sg.news.yahoo.com/penang-spm-candidates-endure-different-021647190.html
“I had to walk in the waist-level flood waters because my father’s car could not pass through.

“This is my first experience of such an incident, and I am very sad it took place on the first day of my SPM exams.

“I am so rattled by the experience that I fear I will not do well,”

Penangites deal with 4th flash flood since Oct 29, many are “fed up”
https://sg.news.yahoo.com/penangites-deal-4th-flash-flood-033358034.html

Time for CAT worshippers to pray every morning @3am with 3 red joss sticks facing Komtar Tower for less rain storms in the coming days! Definitely a nightmare comes 3am rain for Niao Kong.
Chow Chow, ye better learn to swim / float when ye visit P. Ramlee Flood Ground Zero!
What else to blame?

This is the Karmic price to pay for being Absolute Vodka Arrogant!