It had rained the day before, so some of us were concerned that our little expedition would be washed out. But as it turned out, the downpour the previous day and the clouds above made it a comfortably cool day for a hike.

As morning broke into an overcast Saturday (30 September 2017), a group of 17 intreprid hikers who had signed up for Aliran’s Working with Youth: Hike in Teluk Kumbar, showed up.

This is what we learned along the way:

1. The reclamation plans are larger than Forest City’s in Johor

We had come to check out the panoramic coastline before any work could start on the plan to create three artificial islands off the southern coast. 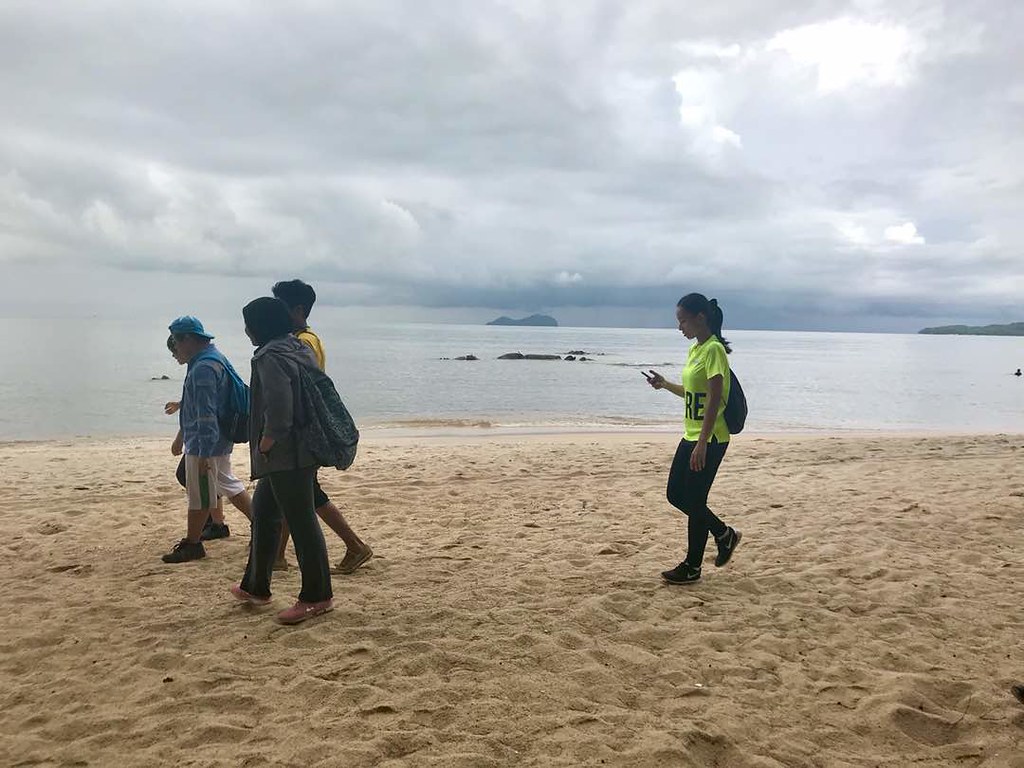 If you thought Forest City in Johor was huge, think again.

The three islands off the southern coast of Penang Island would cover close to 4,500 acres – the equivalent of five Pulau Jerejaks! – much larger than the four artificial islands of the 3,425-acre Forest City project.

too much durian causing heaty exchanges between tunglang and Shriek ?

see video below to cool down lah !

Those must be Thai durians Kee. The flesh are very yellow but I would like to taste the light yellow samples. It looks very tasty, You still support DAP? After ten years of mediocre governance? Come on, spend your time doing better things . Look at the damage they have done to Penang both physically and morally! See the number of reflexology centres? (Many of them) are (allegedly) prostitutes joints. … Don’t believe they are prostitute joints? Ask Mr. Anil to conduct a survey, I do not mind leading the survey. This election is about how many seats they will… Read more »

Some say GROs earn money with sweat and tears, unlike easy money via “Alibaba” venture?

Please lead the way. You must be very familiar with the scene?

The real estate industry is one of the most over-reaching, corrupting, destructive, enslaving (through debt) and destabilising. Each time the economy improves, it sucks up capital and credit. Remember what almost brought down the world economy in 2007-8. This seems to occur within Bolehland every 10-12 years.

Subprime Mortgage Crisis. Refinancing Frenzies.
Some tend to forget the messy + painful lessons of past financial meltdowns.
Nevermind it’s not in my country, is the attitude of some. BUT nevertheless Progress Unchecked should be the guiding laissez faire principles from politicians, bankers, investors to businessmen.
Let’s tango until no tomorrow.
For the mean time, no money no talk. You die your business. Shoo, shoo!

How to stay in condo if there is no developer. Ordinary car not good enough but must drive a 4wds? Use it in recent flood? Can shriek but don’t practise them

Pls lah, change your name sake back to zoro!
Pls lah, shrieking won’t convince!
Shrieking is noise for anilnetto.com!
Dare to confess you are zoro?
Orang Bunian in Belum are still waiting for you to take up the challenge (free one-way trip)!
Chicken?

Ah pek, you ask people to confess about about you yourself? Again practise double agent? Own 4wd and stay in developer’s built condo but same time shrieking ptmp and building frenz? All the shouting but hiding below the shriek.

Penang lang planning vacation in Down Under be aware of stormy rainfall especially in Melbourne.

Otherwise, can revisit the horror of water havoc away in foreign land.

Penang Food fair at Spice since Friday until today. Don’t be fooled by many Bus Persiaran parked in the vicinity of stadium. The buses bring Mainland Chinese (MBI linked?) to the The Arena (opp Spice or D’Piazza Mall) shophouse which houses showrooms for Ideal’s Waterfront Condos at reclaimed sea opp QueensbayMall facing Jerejak Island. No signboard in front of showunit. Penang fishermen can become bus drivers to bring foreigners to book condos there and can earn ideal income.
Anil yet to snoop, can do it today after praying on Sunday morning.

No wonder fishermen are worried!

tunglang
Reply to  Will Barclay

Fishing career is not in the Cosmopolitan Penang Frenzied Mania. The Cosmo CAT doesn’t care if prices of fish has gone up beyond affordability. Even the once ‘ulama’ fish (dried as kiam hu) that no one wanted now has a upscale price to pay. They CAT only care for their own agenda – to copycat SingLand which also has its own agenda, which some Singaporeans are already fed up & have migrated, which is an indisputable fact of life in a place no more tenable to live in. BUT should we copycat without understanding the MAJORITY needs of locals &… Read more »

You mean CAT don’t love fish? No fish how cat survive? Cat catch rats but do not eat rats

Many pg lang migrated to singland and displace original Sinkapore lang. Eg former singland finance minister is from pg. So is fair singland lang come to pg. Last you can visit tong shan and see Trishaw carries volumes of plastic containers. Now you will it expensive to visit China and become cheapskate because your ancestor place has moves ahead. China can have wechat, alibaba, drones, convenience store asked payment by hand phone, build aircraft carrier, develop a better method to launch aircraft better than the. Yanks, high speed rail which interconnects China to help people to get home in time… Read more »

Eric Kuek
Reply to  Will Barclay

Malaysian fisheries must upgrade our fishermen with better vessels (with cold storage facilities) to go further out in the sea for better catch. Learn from the Japanese. Today even China fishermen are venturing out as far as West Africa!

No wonder we have kampong fish and kampong champ. Of course what our patrol can do. Fishermen get robbed by pirates and illegals can come in anytime.

1. So what? Johor is not land scarce, Penang is. The comparison should be to Singapore, not Johor.
2. Migration is fact of life if you want economic growth. Just say you are anti-growth.
3. You really think Penang gets its fish locally now? It’s mostly imported.
4. If you are RM2,000 pm fisherman in 2018 Penang, you already have bigger problem than the reclamation

See how much distortion,devastication upon the nature of our mother land in the name of prosperity or prosperous the state of Penang as the dreamer flow against the law of nature.The most to pay is the marine resource and environment but there will be a pay back time for the generation to come.

Perhaps Penang can follow Brunei that branches into ecotourism?

Pls lah, learn from the unmistakable mistakes of Forest City Frenzied. Where got so many buyers? Stop dreaming. Pls lah, Penang water getting less due to botaking of hills. Planning to sell limited clean water (@ higher price) to the 3 Stooges Islands instead of meeting the urgent supply to Penangites? Pls lah, houses are super-expensive only the rich & famous & got-kangtao can afford. Planning to develop a Satellite Hainan for PRC Chinese? How to genuinely sing “I Love Penang” everyday in front of Komtar? Pls lah, the sea is rising. Also angry! Will be very costly to maintain… Read more »

Shrieking better than shriek. Must be mother of all shriek?

Who is actually shrieking in name sake? zoro?
Bad vibes for Anil’s blog!

Who is hiding behind the actual action. Howl against but actual you living in condo and drive 4wd leaving more footprint than a car.

Dare not admit himself, the zoro b’cos it’s shameful!
Won’t be surprised if zoro appears later to justify the 2-in-1 troll masquerade!
2 x Komtar Dedak mah!
Anyway, I will contact Bunian friends for further action since they know where is zoro.
Shrieking is not comparable to Pontianak’s as related by my Bunian friends.