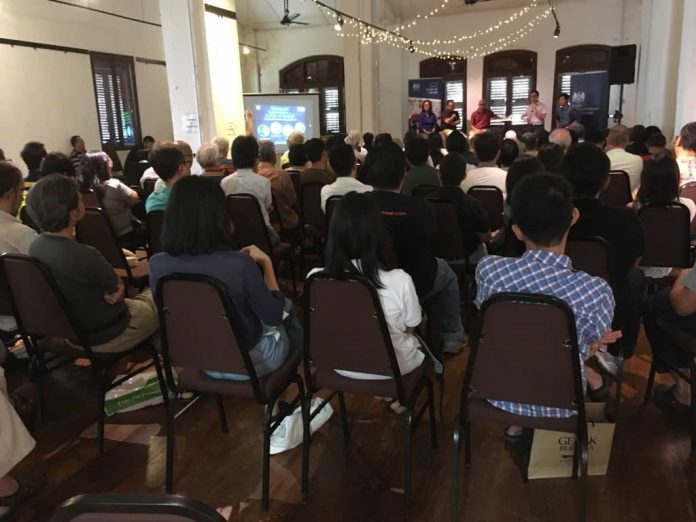 At the talk on Sustainable Urbanisation – Myth or Reality? – part of the Chevening talk series, jointly organised with Penang Forum in George Town – concerns from the floor centred mainly on a couple of key issues: over-development, land reclamation and siltation.

About 70 people turned up for the talk, many of them uneasy with the direction of ‘development’ in Penang, which they felt was not sustainable. Folks from the floor peppered the panellists with questions, clearly concerned about what they felt was over-development. They spoke about tower blocks looking half empty. They questioned the need for all that land reclamation. A couple more worried about the siltation around the Tanjong Tokong area and near the Queensbay area. Is this the kind of Progress we want?

Later someone in the audience contacted me and said I should write about ‘Environmental Impact Accountability‘ (rather than the usual Environmental Impact Assessment). What happens when an EIA report turns out to be so wrong and the environmental consequences prove catastrophic? Who will be held accountable? Who bears the consequences? The project proponents? The state authorities? The federal Department of Environment? The EIA consultants?

And who bears the cost of dealing with siltation – ie the cost of dredging? Will public money be used – after a certain ‘warranty period’ – to pay for expensive dredging costs?

Yacht owners are complaining that entry is almost impossible in the Straits Quay marina area during low tide. Similarly, others have complained about siltation around the Queensbay area.

Fisher folk have also complained about the dwindling catch of fish as a result of siltation, not only in the immediate surrounding area of controversial projects, but further away even on the mainland.

You might think yacht owners are a minority. Perhaps consider them as canaries in the coal mine (coal miners once used to bring along canaries to the mines. If the canaries died, it would provide the miners an early warning of dangerous gases before it was too late) – an early warning signal. What happens if the siltation results in large cruise ships finding it more and more difficult to navigate the northern channel or the port getting clogged up? What happens if the fishing catch dwindles even further?

If all this siltation is the result of a specific project(s), who will be held accountable for approving it/them and giving the environmental green light? Where does the (Environmental Impact) Accountability lie?

After the talk with state representative YB Zairil, will he bring back the thoughts of the Forumers to Dewan Negeri ? what’s the follow-up ? If all stop here, then the talk is not sustaining ?

Does not sound like tunlang = ah pek?
Tunlang ah pek missing in action?

The concerns of yatch owners is low-priority for me. We have much bigger fish to fry: (a) loss of land and beach (b) loss of fishery and livelihood (c) poisoning of fish (d) threats to swimmers including tourists from jellyfish and undercurrents – due to underwater erosion.

“There is no such thing as environmental consumerism [or development]. If any item requires manufacturing, packaging, shipping, distribution, warehousing, energy, roads, parking lots, shops, banking and profit to get from the Earth to the human, it is not sustainable.” – “oldgrowthforest”, comment at alternet.org, 2017

Bring your own bags and avoid plastic bags when you do your shopping.

Jho Low’s luxury yacht The Equanimity that was allegedly bought with funds siphoned from 1MDB has been seized off the coast of Teluk Benoa in Bali, Indonesia after a joint operation by Indonesian and the US Federal Bureau of Investigation (FBI).

Come witness the young maidens of Penang throwing mandarin oranges to bachelors across the Penang Channel at Chap Goh Meh elebration this Friday, March 2 from 7pm to 10.30pm along the Esplanade.

Ah pek should stop them and give warning that oranges could silt up penang channel. EIA shows siltation could not happen but forum ssys it happen. So oranges willzilf up the foreshore

Ah pek tunlang, happy chap goh meh. … If so green and organic, get net to catch those oranges. Otherwise they silt up the foreshore. The oranges can donate to temple and ah pek will be rewarded with one year supply of siam curry mee from siam temple

Throw oranges, they may silt up the beaches and cause siltation. Ah pek and pf members are quiet over the amount of burning incense. Instead of encouraging to turn to elect or e incenss, they chose to remain silent. There electric candles and even apps in smart phones providing offerings