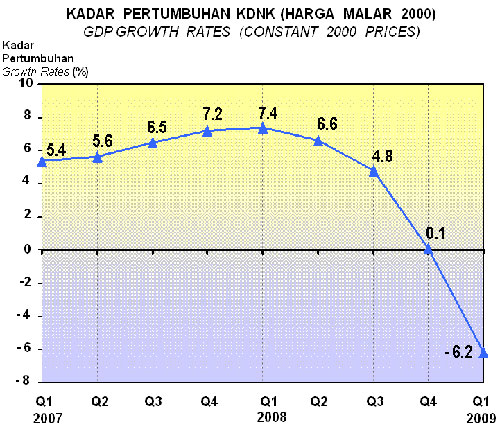 Reality has just smacked us in the face.

This is the first time we are in negative territory since 2001 and it’s the worst performance since the Asian economic crisis.

Manufacturing fell a staggering 17.6 per cent, largely due to our unwise over-dependence on FDI-driven economic growth, especially in the electronics sector.

The electronics and electrical manufacturing sector contracted by a whopping 27.3 per cent.

Overall exports and imports dropped by 15.2 per cent and 23.5 per cent respectively. The drop in imports is significant, as they were mainly in capital and intermediate goods, reflecting possible lower future investment in manufacturing.

Many are now talking up the prospect of a recovery in the second half of 2009, but it is more likely that the economy will be listless for the next couple of years or so because of our dependence on export demand. Remember, the biggest consumers, the Americans, are in bad shape.

Time to look at more sustainable development, don’t you think? Why not look at boosting food self-sufficiency and spurring small localised economic activity, rather than always going for the big projects and multi-billion ringgit investments aimed at the export market?

By the way, don’t you think Abdullah Badawi was smart to hand over the finance portfolio to Najib when he did? He probably could see this coming!

I keep hearing this idiotic ad on the radio telling me to buy local. What local is there to buy? Eggs? Milk? Rice? Are there clothes out there not made in China? Can I buy a foreign-made house? Another dumb BN ad produced by crony ad companies that teaches me absolutely nothing!

My view is the BN govt is just buying time by lying about how good the economy is. When they cant hide the true facts anymore, they will create positive scenarios to pacify us malaysians, like the economy will recover in the third quarter and so on and so forth. All this are b….. Our economy will be one of the last to recover….only after US, Europe, Japan, China recovers.

I think the RM60B stimulus package will be like throwing a coin in the sea. Looks like part of it will go to the PKFZ bailout fund.

I’ve wondered if Najib’s 1Malaysia concept would be as far reaching, to help the small man improve his business acumen and skills. That kind of generosity never existed. There is not even proper allocation of space for the small man to do his business in a dignified way…otherwise we will not see illegal stalls cluttering up our roads….Would the rich business tycoon,help out? Well we have high sounding names like YTL and Vincent Tan who would not lift their big fingers to help spread their talents to include the small man by broadening their scope of business enterprises. they could… Read more »

ANIL,
Please show us the Amnesty International Malaysia recent report. Not only GDP plunges, human right also deteriorated.
Remember KUGAN case still no conclusion, no one is prosecuted. Nothing happen.

Do you real world examples of countries who have been successful at this fleeting idea you call “sustainable development” and “sustainable production”? There is no such thing. “Boosting food self-sufficiency”? Is that what communist countries used to try to do, and didn’t Badawi try to allocate some of the budget to agriculture? Would you like us to chop down more trees in Malaysia for more farmlands? “Spurring small localised economic activity”? Like what? Give a few examples? More mamak stalls? Well, I can tell you the mamak stalls are probably making more profit than some of the large MNCs these… Read more »

With brainless politicians manning the Finance Ministry what can we expect to achieve? When the early signs were there, these fakes kept insisting that our economy was resilient and will NOT go into recession? The stimulus package came late and nobody knows where the money went.
These are the very people, self-proclaimed patriots, who will destroy this country.
Let me put it this way. Will God bless a country if its leaders are immoral, arrogant and even criminal?
…God will keep sending the plaques till BN is removed. Najib is the modern age pharaoh.

yeah..right , recovery by 2nd half. They forecast only contraction of 2% 1st half this year.

M’sia are rich with resources & minerals but never capitalise it the last time. Everyone in cabinet is thinking for themsleves on how to avoid further erosion on thier earnings. Income tax dept is going full force, or else how else will they get to fund the stimulus pakage.

Most of all..did we ask us Rakyat if M’sia has actually recover (full blown recovery)from the previous hit back in 1998.

“…sustainable production by the masses for the masses to meet local needs” is good for promoting a strong growth of the middle class society and narrow the wealth divide. The poor masses if participate in such sustainable production proactively can improve their financial status quite rapidly. The rich might not become richer and the might may not become mightier…could be the reason why the Government and the bureaucrats are not too keen on the proposal which takes a long term to mature properly and lots of initial sacrifices.

Who now would dispute that world capitalism is facing its worse economic crisis since the 1930s? Certainly Malaysia could not avoid this crisis. This could undermine the credibility of Najib government and could lead to political crisis if the economy worsening further.
http://asocialistmalaysia.blogspot.com/2009/05/great-recession.html

If only we can wipes out corruptions by 50 % .
Just a wishful thinking there . As long as bn is in power it is impossible.
Recall the former sleepy PM launching his “projek tanam sawi & kangkong “? (it was front page on the MSM )He was right back then that is to go back to basic farming.

How believable is a GDP Growth Rate of 0.1%? Could the real rate be a negative value, no matter how small and thus putting us officially in a recession already?

Some quarters, especially the MSM have been boasting about Najib’s qualifications in economics. Okay, so lets see if he had learend anything from his university days and KNOW how to apply what he learned. It’d be fun right? But my guess it’d be sad too.

This BN/UMNO govt has been kidding the nation all along and still continue to do so! With the political instability and the on-going big mess in Perak, which foreign investment will want to come?

This piece of news won’t be good for the KLSE.

Malaysia GDP per capita is stagnant at USD5000 for years while China already hits USD3000.

With the present growth rate of GDP in China, China GDP per capita will definitely overtake Malaysia by 2020.

My answer is vision 2020 is a daylight dream under the BN government.

Malaysia has the worst performing 1QGDP numbers in Asia. Apart from the fact that we are so export-dependent as Anil correctly noted, this horrible decline in GDP is also due to a general lack of investor confidence in Malaysia’s economy. But few analysts are going to say this since they all afraid to speak the truth for fear of losing their jobs. So, let me say it for them here. We can break down this -6.2% figure into the following sectors that contributed to the decline: 1. BN’s Lack of respect for Constitutional Governance and Rule of Law (a.k.a. Perak… Read more »

The previous Finance Minister II Mohamad Noh Yakcop said Malaysia will not go into any recession. Today he is Minister in PM Department in charge of Economic Planning Unit (EPU). Wasn’t he also the one who lost billions of our money in some adventures when he was assistant governor in Bank Negara? I pray for Malaysia.

From KLCI aspect we don’t look like -6% of GDP growth rates. The Writer excited of KLCI can climbed to 1000 pts some weeks ago and Jeff Ooi says “so what?” from the real economy perpecdtive. Both are right at opposite direction, looks like the KLCI is disconnected with real economy somehow, nowadays. Don’t know if the political scenerio drive the economy growth or the economy scenerio has to drive the politic growth?

Anyhow, with this 6% contraction, I would think the KLCI will be pushed up further tomorrow. Have to ask the writer how high it could go tomorrow.

I think there is general international consensus that the Global Economic Crisis has bottomed out. The next quarter’s figures are likely to contract by a smaller amount, if not actually show some positive growth.

So, there’s no need for knee-jerk reactions. Equally, the Govt should take steps to balalnce out the Economy so we are not too dependent on one or two sectors.

And yes self sufficiency in food & agri as well as the development of SMI’s will help a lot. Surprisingly I recall Badawi pushing the Agri sector early in his premiership!