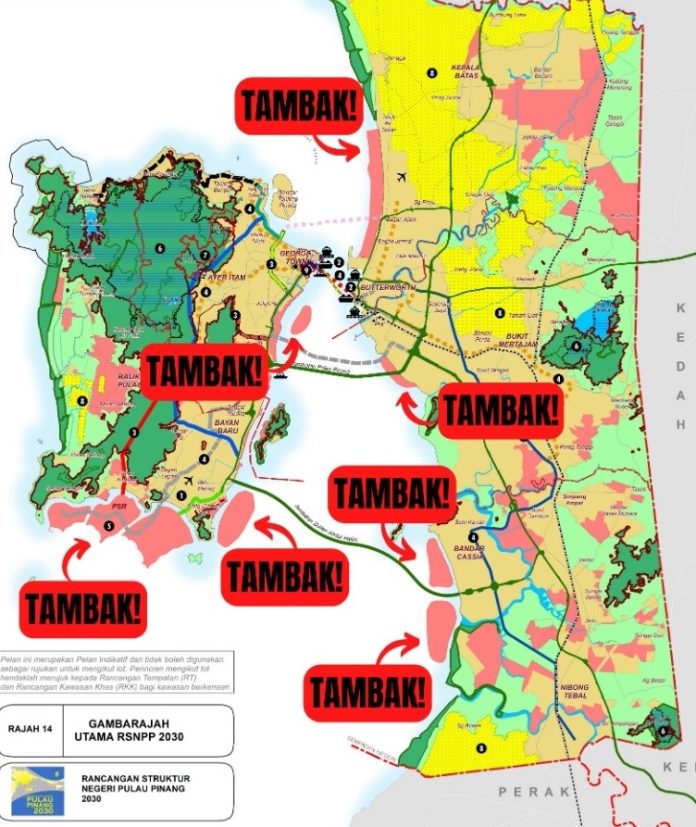 While most people are in festive mood or caught up with election fever, the draft Penang Island Local Plan is now up for public display and comment. Except most people are unaware of it.

There is even more reclamation in the pipeline in Penang ‘Darul Tambak’ (the land of reclamation) – off Batu Maung and Jelutong.

The draft can be viewed at the Syed Al-Attas Mansion and Makerspace Balik Pulau until 13 December. In the pipeline is even more reclamation and yes, stations for that ill-conceived expensive light rail system.

Meanwhile, most people are unaware that the last day for public comments on the draft George Town special area plan is 28 October.

Are these drafts fully online? Why do people have to pay to get pen drives with soft copies at RM30 and RM150? What happened to all that talk of ‘smart cities’?

What is RM 30 today? RM no more bullock cart and everything has gone up. Only thing that has gone down is RM exchange rate to USD. Even our RM is worse than the Thai bath. Used to be slightly higher but today is 0.88 of thai bath. If look at the reclamation are most are on non fishing ground like existing esplande or close to bridge crossing.

RM30 can still survive for a day if no house or car loans. RM4 for breakfast, RM9.50 for lunch, RM9.50 for dinner, balance RM6 to pay daily utility and phone bill, and RM1 for Tabung Harapan?

RM30 disappeared if you consume 1 Starbuck and 1 Zus coffee in one day!

Today many people can complain not enough money, but they can indulge in expensive stuff like Starbucks and Zus coffee. Also they think it is cool to buy stuff from Family Mart and CU when the items are [expensive]…

Understand what you mean. Ah wondered same too until they talked about and introduced the population wealth breakdown into B40, M40 and T20. T20 alone has about roughly six million adults. M40 has about 11 million.

After 65 years under BeeEn, rakyat income is still that small? It means only 10 sing dollar. No wonder all Pengkias want to go to Sing to cari makan.

Taiwan TV reports the big number of Malaysians crossing the causeway daily to work in Singapore to earn 3 times more in wages:

Brain drain is not GE issue?

Brain drain and shows after Sink seperated, they sing Singapore Majukkan as in their motto but we under Be EN gostan to END

Sometime ago, a politician from the south whose brain was momentarily incapacitated said something of a similar thing about coastal land reclamation, something like ” What’s the problem, the fishermen can go further down to the sea to do their fishing “. And he was talking about the inshore fishermen.

Am sure you can do better, shriek.

All pha – The land and foreshore is oredi further away. Naturally fishermen has to go further. Otherwise they fish on land and become – fisher of men. If the foreshore and beach is eroded, the sea is now now near as the land mass has disappear. Fishes can swim closer and why fishermen has to burn more petrol and warm the globe.

Must learn the lesson from Forest City in Johor

It is a massive failure but many dare not critisise because of the owner of the project. Once China folks stop coming, the project fails instantly.

You should know that, Mainland China has an exclusive military installation too, across the sea, opposite of the state of Kelantan coast, right in the middle of the South China Sea.

Is it Mainland Chinese Expansionism, shriek ?

in air hitam, they said wee can ask Xi to buy more durian and agri products. Why not you ask your We Wee? You dare not ask your Tai Lo? I no Tai Lo

He said the relocations will boost the state’s economic growth, thanks to its business-ready infrastructure.

Good news indeed as more jobs will be created. Otherwise more youth will have to find jobs in Singapore.

All great and good but will Penang’s natural resources be able to support this.
What about Penang’s waste disposable system. What does the Exco for waste and rubbish latest data say? Will it be able to cope? Will the infrastructure in Penang be able to withstand the influx of more labor coming in, etc etc and etc ?

Jeff Ooi has entered the fray to contest in Bayan Baru on Warisan ticket. Jeff could exploit the weaknesses of the complacent YB Sim. Jeff Ooi should know what the needs and wants of Bayan Baru residents that have been deprived by YB Sim.

DAP chairperson Lim Guan Eng accepted his MCA counterpart Wee Ka Siong’s challenge for a public debate on the cause of the delays over the Penang airport extension project.

Just wondering… is this the most critical issue for the people on the ground?

For some clueless leaders, it will be a critical issue just for the sake of debating. Their clueless supporters need to be entertained also.

A simple proof on the you say, I say should suffice. But no, it must be debated.

Their previous debate about cabotage, created much excitement, but in the end, it came to nought as this will be also.

The Penang government is planning to carry out more land reclamation activities to increase the state’s land reserves for housing.

A1 == PENANG UNVEILS ISLAND’S DRAFT LOCAL PLAN AFTER DELAY by Ian McIntyre dd 20 Oct 2022 4:59PM https://www.thevibes.com/articles/news/74769/penang-unveils-islands-draft-local-plan-after-long-delay ======== *** Penang State Govt has suddenly introduced the draft for Penang Island’s Local Plan after 15 years of governing our Penang State just before the 15th General Election and religious festivities when everyone is busy . Now, what does ” Janus-faced politicians and Leviathans ” means ? ” Public, stakeholders can submit feedback till Dec 13, says chief minister ” *** Would like to hear what our local NGOs like Aliran, Penang Forum, CAP and others etc, have to say… Read more »

Penang can attract PRC or Hong Kong Chinese, unlike Johor. They now know that Johor is near to Singapore but the causeway and CIQ always congested and jammed!

All pha, as Senior, you have many judgemental sayings as demostrated in this forum. Go and make your 888 comments and include as Voter. Here you say a lot and you can orso copy and paste

Don’t have to be envious, shriek. You too can give as many opinions as you want or as you put it ‘judgemental sayings’ , that is if you can.

You can sing wonderful lyrics after lyrics about your Opposition people now Opposition Family Incorporated, about the good things they have done for our Nation and our fellow Rakyat.

No one is stopping you from doing so, are they?

All pha – why you never follow your master? you do not want development but your master wants to enlarge airport? Penang oredi small. The airport makes island even smaller. See the school has to go somewhere. Send airport to Kedah. Then Penang = less noise, traffic, foreign visitors. Penang kias no need to eat shark fins – ikan bilis can made into lat sei amah
https://www.freemalaysiatoday.com/category/nation/2022/11/07/airport-project-delayed-by-guan-eng-seeking-private-finance-says-wee/

A2 == ” The island had been without a local plan for reference for the past three decades. The completion of the plan was also part of Pakatan Harapan’s (PH) manifesto for the last general election in 2018, Chow said.” *** Not sure if the above statement is correct. Needs verification. 1. ” PENANG’S LONG AWAITED LOCAL PLAN SEES LIGHT ” by anilnetto.com dd 17 Jan 2010 https://anilnetto.com/economy/development-issues/penangs-long-awaited-local-plan-sees-light/ 2. ” PENANG LOCAL PLAN POSER dd 9 Oct 2013 ” https://anilnetto.com/economy/development-issues/penang-local-plan-poser/ 3. ” PENANG CM : LAND IN BATU KAWAN NOT LONG TERM ALTERNATIVE TO PSR ” By Audrey Dermawan dd May 2,… Read more »