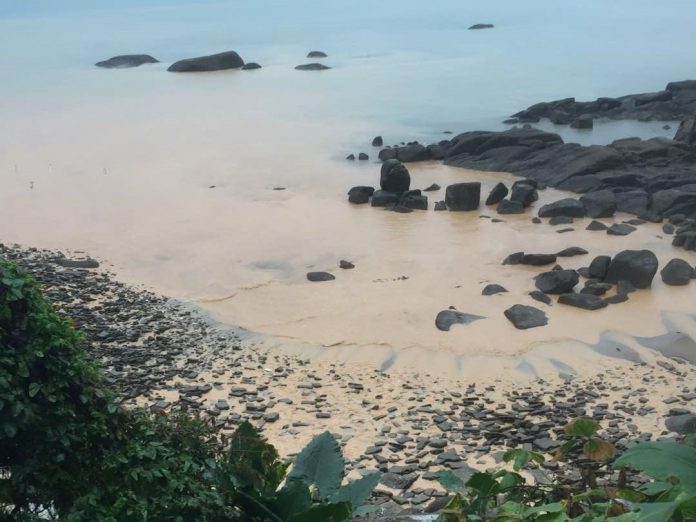 Immediately after rainfall in Penang on 5 January 2018, which again resulted in sporadic floods, a friend sent me this photo of siltation along a stretch, apparently in the Batu Ferringhi beach immediately after.

Was this mudflow due to soil erosion from hill-slope development in the area?

Singapore was hit by flash floods a couple of days ago. But unlike the floods in Penang Island last year, the floods over there did not have that much of a teh tarik look.

Meanwhile, Sahabat Alam Malaysia has issued the following statement on the situation in Teluk Bahang:

In a survey conducted by SAM after receiving complaints from the fishermen, we found that the pollution from concrete wastes on coastal and marine areas here was severe and endangered the fishermen. The rocks and piles found in this area can cause injuries not only to fishermen but also to the public who frequent this area.

The pile of waste on the seashore also causes fishing boats to be exposed to strong waves and damage them while moored in the area. On 22 December 2017, SAM sent letters to the relevant government department and agencies highlighting the issue faced by the fishermen here but until now no effective action has been taken.

Among the Federal and State agencies that SAM had written letters to are the Ministry of Agriculture and Agro-Based Industry, Fisheries Department, Fisheries Development Authority of Malaysia, Penang government, Penang Island City Council, Penang State Exco for Local Government and the Public Complaints Bureau.

SAM is disappointed that although the problem has dragged on for more than seven years, but until now no firm action has been taken on the party that caused the problem. SAM is worried that if this problem is left unresolved, the situation will become worse. Not only the surrounding environment will be threatened more seriously in the future but the safety of fishermen will be put in jeopardy too.

Therefore, SAM hopes that the government will investigate the problem faced by the fishermen here and take legal action against those who are found to have violated the laws and regulations contained therein in order to resolve the matter.

SAM, Jaring and the affected coastal fishermen will continue to voice our protests and launch a signature campaign if the problem persists and the government fails to overcome the problem.

Penang, the rest of Malaysia and Singapore have had their flood problems but so far, not yet as bad as the mud slides in Montesito, California following forests burned in wild fires. However, will Penang one day experience similar catastrophes as happened in Montesino?

Continue to mess with nature and such catastrophes could well strike Penang and other parts of Malaysia.

Good News or Bad News?
If you will face socio-economic-housing pressure, that’s bad, bad, bad news!
Don’t ask the politicians, they care only money-talks! After you voted for them, your promised future (as in their political snake-oil manifesto) is not binding in thy votes. So, be careful who you will vote.
But if you are in business, there are $$$-opportunities to serve foreign retirees, who may be generous or kiam-siap kui (most likely as they want to stretch their money here until the last breath).

Having said that, with or without $plurging foreigners, even traditional economic rice in Penang already following food court pricing. Don’t believe, go to a stall at Penang Road coffee shop, menu state eggs from RM1.50++.

Even the famous Curry Mee @ Lorong Seratus Tahun also cost ‘gila’:
One Bowl costs: RM6.00 (that’s without the extra liao)
I already BOYCOTTED this greedy stall for good! Since I can scout around for many other better economical options in Perak Road, Jelutong & Ayer Itam market.

No money no talk. No money how to have food museum. No money, how to build housing for rakyat. No money how to buy curry mee. Can drive car and 4wd but cheapskate. If hunt for food, more driving, creating more co2, global warning and worst creating traffic jam.no wonder state gomen has to come up with ptmp and spend millions to build new highways.

Mario brando is paid a millions in the Godfather and Apocalypse Now for few minutes of filming. Boycott too for paying so much for fee minutes work?

Petrol must be very cheap like water? Can drive here and there and round the merry go round just to hunt for cheap curry mee. What a thinker. Driving around burning petrol to hunt curry mee is still cheaper than rm 6 curry mee. How to blame ooi’s secretary for the food museum when the proposer thinks it is cheaper to drive round looking around for better price than the rm 6 curry mee? Now one ton mee too heavy? Seek to curry favour?

Caused by over development, no doubt.

What over development? Pg island only small …. Not a big island like Kalimantan or Aussie. Where the rubbish all goes to? Barge To China? What more demolition waste. Rubbish float but concrete waste sink and stay put. If pg is like Kalimantan, there will be landfill. Hk orso has limited landfill. They resort to burning. If build incinerator, PF will orso complain?

If such short rivers can expose such siltation, …

… and which curve and bend will it deposit the silt, leading to shallow river bed where and flood where about.

Why not blame the Nov flood? Pg rivers are just a big longkang in China. China rivers carries ships hundred of miles inland equivalent to port klang to port kuantan

Island mentality drives up demand for affordable homes in Penang.

Demand for housing on Penang island remains high, as locals still shun the idea of living across the bridge on the mainland.

There are no signs of a housing bubble in the Malaysian property market, which is expected to stay “uneventful” this year despite some property overhang concerns, according to CBRE|WTW. “The bubble will not happen. We have not seen panic selling happening in Malaysia, and there is no price overheating,” its managing director Foo Gee Jen said at a press conference after the company’s “2018 Asia Pacific Real Estate Market Outlook: Malaysia” briefing here yesterday. Foo stressed that signs of panic selling and overhang issues are prevalent only in certain sub-locations, such as in Cyberjaya, where vacancy rates are generally higher.… Read more »

While those awarded the controversial undersea tunnel project have started to make high-profits (from swapped state land developed into private properties for maxi-profiteering), the controversial project continues in limbo. Now, see who are actually profiteering, the originally-awarded China developers or some guanxi switched investors nobody knows while the cats were hidden in Komtar Bag. maybe, CAT Gomen prefers a Designer Sea Tunnel sold on the Voir catwalk. Did DAP govt pull a ‘bait and switch’ on Penangites over undersea tunnel project? https://malaysia.yahoo.com/news/did-dap-govt-pull-apos-042024812.html “The main point is that the Penang government had reassured and promised the people of Penang in March… Read more »

No money no talk. You want to dump hundreds of millions to buy materials, mobilise machineries and pay salaries to workers for a year without being getting paid from state gomen? Try harder to work harder if the boss does not pay your salary for few months?wants Try asking central to fund the project? Even the consultant who does the paperwork on the design wants to be paid. Try harder to ask your client to pay your fees in curry mee like engineer gomen buy migs ky planes from ussr by paying in palm oil.

Landslide near Mersing in Johor after heavy downpour.

No downpour at 50 Love Lane, but outpouring of anger by Dr Chang aka Penang’s Ghee Hin Bruce Lee over the Miao Hui (Penang CNY Temple Festival).

tunglang can provide assessment on this issue, potentially a state election topic now that Dr Chang and PCCA is clamouring for Gerakan? Anyway, is there a need to glamourise Ghee Hin which is a secret society of old Penang?

Ghee Hiang biscuits and sesame oil the favourite icon for Penang. Pls do not glamourise the secret society of vintage days.
Penang folks now more eager for Gerakan and MCA free food events leading to GE14, something Jocelyn Tan can identify with but fail to report.

Hai San vs Ghee Him rivalry could be good movie script to showcase Malaysia as multi cultural country not just nusantara legends.

This could be the IP MAN of Penang.

Glamouring + being a part of secret societies in this modern era is a social-brotherhood male egoism & attraction of economic gain (legally + illegally). Recent events including killing of gang leaders in Penang are an eye opener of how widespread gangsterism is entrenched in the state. One funeral procession I saw in Farlim were lines of heavily tinted posh cars & executive-style dressed in black of young members (in their early 20s + 30s). No more the Ah Too – Ah Kow image of the early 60s – 90s of Penang gangsters in Perak Road, Chhit Tiau Lor, King… Read more »

Jeff Ooi should have assisted you in creating virtual street food museum for internet users since he is also IT expert. You can create 3D view of street food merchandise for upload into such virtual museum. Once successful with many viewers, then can seek state fund for upgrading.

If successful, sponsors will knock at the door and beg to contribute money.

Talk money. Rm 6 cannot afford for a bowl of best curry mee? Yet you want the state to have food museum. Now with GST, our shillings have all shrink and become lighter. Not like bullock cart wheel when you can sleep in the middle during your young days. Did you pay hasli dlm negeri? How much engineer give to komtar? Buses are under Engineer and yet cheapskate and wants to run on roads using reclaimed Islands funding. Free loader and engineer wants everything and free of charge

Get National Geographic to film the historical clash between Hai San + Ghee Hin in old Pulo Pinang. The clash site is still there – Church Street.
Sometimes I passed that old street at night, my hair stood on end. Could be the restless disembodied who died in the worthless fight of egos.
I may want to try infra red night photography to prove their existence.

If Nat geo do the filem, you are the right person as Godfther or tai lo. You shout the loudest, challenge other to duet. Chose which? Hai San or ghee hin. Cantonese or hakka. Too bad you are a hokkien. Time for ready and action. Otherwise cut, cut and cuttoo

Nowadays gangsters dressed well like k-pop stars with fancy hairdo. No more old fashioned Ah Beng look. They are behaving like modern day Yakuza gang of Japan, most likely headed by notorious ‘Datuk’, fake or real is up to you.

Attention! Read to understand why our property market inflation came about:

Property flipping here to stay as lower-income earners get into the game
https://malaysia.yahoo.com/news/property-flipping-stay-lower-income-earners-game-230500058.html

The tarik mix with ocean juice

Malaysia experience cold spell. Must be the pg buildings along the hillslopes. The buildings make the world slightly colder.. Cold weather will freeze seawater more and prevent sea level rise.

The last malaysian sumatran rhino is sick and may die, not a whimper from PF. Once it is gone, everyone including PF is happy?

The video shows it is a construction or demolished waste. Someone dump and due to central gomen being lax. Where is Macc? Dumping happen since BN’s rule everywhere. There is no proper education and even education, there is 2 sets of law.