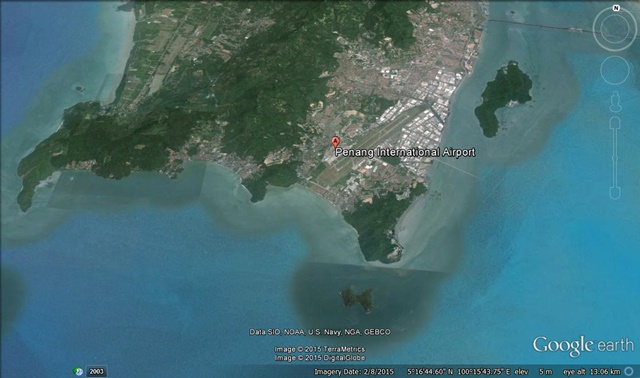 Our guest writer today is Roger Teoh, who is doing his PhD in transport studies in Imperial College in London:

The proposal to construct a new northern region airport, as quoted by the Penang chief minister might not be necessary. The Penang International Airport in its present state is already serving as a northern corridor international airport.

For the current upgrading works for the Penang Airport: Building a new terminal and increasing airside equipment is sufficient to solve current capacity shortages. This will allow the airport to handle more passengers at a much lower cost without the need to construct new airports and runways around the region.

Rationale on why building a new terminal can be justified in the Penang Airport, but not additional runways and new airports: Taking London Gatwick Airport for an example (a single runway airport), the aircraft movements (total number of flights taking-off and landing) at London Gatwick Airport were 282,000 flights in 2017, versus 70,609 flights for Penang International Airport.

In other words, this comparison shows that existing infrastructure can be used more efficiently, where the number of aircraft movements in the existing runway of Penang Airport can handle at least four times more aircraft movement with further optimisation. This optimisation to boost runway capacity in the current airport can be easily achieved, given that the airspace above Penang is not congested relative to the London airspace, which is one of the busiest in the world.

As for the Penang chief minister’s statement that if “the existing airport would be upgraded, it would only cater to demand for another 20 to 30 years. Hence, a newer airport was needed to meet the needs of the island.”

Well, that depends what assumptions were made in extrapolating the growth rate of the population, GDP, and air travel demands in Penang. Given that the Penang state government has a good track record of ludicrously overestimating the population and demand in existing infrastructure, it suggests that full capacity in the Penang Airport might not be reached so soon as projected by the Penang chief minister.

In fact, the further we extrapolate in time, the larger the uncertainties in our forecasts. It is not necessary to try to solve a problem today when it could only emerge in 30 years.

Beer promoter becomes Malaysian hero for standing up to bully

In the first instance, why was that racist provocateur ‘trespassing’ the non-halal section? And challenging the obvious liquor sales is anything but asking for rebukes!

those intend to apply for MM2H , better think twice, thrice, forisce….harassment of this kind is not uncommon in the bumi land…hehe

Not to worry if you mm2h in Forest City, built specially for foreigners, as there is no places of worship in its masterplan.

Call Me Handsome
Reply to  Norman

Beer promoters used to be in cinema. Remember the blonde calsberg lady? Ah Pek can remember that but young dota boys can hehe no chance to see in cinema only in youtube.

tunglang
Reply to  Call Me Handsome

Norman
Reply to  Call Me Handsome

Chow and Mukritz to work out if PH to expand Bayan Lepas runways or new airport at Kulim?

Penang need an airport that is not flooded by thunderstorm.

GEORGE TOWN, Nov 20 — The Penang government has been recognised by the World Health Organisation (WHO) and the South-east Asian Tobacco Control Alliances for its initiatives to curb smoking in public.

As usual, it is either a developer’s chicken or a developer’s egg dilemma with no clear, sensible options to creatively solve a problem. As usual, it is build, build & build more.
In the end, it’s Ah Kong’s monies down the drains of Pg Intl. Airport. Then the CAT blame game starts all over again but to blame who after 905?

Not needed in Island, better build at mainland

nah, i don’t think i need an London imperial college transport ‘expert’ to tell me that it is not a good idea to have two airports (penang and the proposed kulim) so close to each other with overlapping function and services. ..

Call Me Handsome
Reply to  Wei

Move Bayan Lepas airport to mainland and use its land for IR4.0 AI facilities to provide jobs for millenials.

With more Malaysians shopping online, Mah Sing will be offering residential properties for sale on Lazada‘s e-commerce platform. The collaboration is the first in Southeast Asia and you can buy a house during the upcoming 12.12 sale.

Read about Singapore public’s feedback on the country transport master plan, which will shape the future of land transport to 2040:

Penang Sentral in mainland official opening today. Anil got coverage or not? The sentral may foster closer relationships of penanglang on both sides of straits. Now ferry buses ktm link up better can spur development. May be UTC and a library can be set uo there. What say u?

The problem is that the Penang transport proposal is not yet finalised, but we already built a big hub. A bit like putting the cart before the horse.

And we only have four ferries operating during peak periods. Even fewer during off-peak. Fix that first.

Yes, one of the main issues is the linkages between the ferry terminal, railway station and bus terminal.

the “cart” is ten years late…hehe…where is the horse you may ask…hehe..they are still fighting over whether it should be a real horse or a donkey as proposed by the amazing penang forum transport ‘master’…

Norman
Reply to  Call Me Handsome

Penang Sentral was mooted by Pak Lah, if I am not wrong. He initiated 1st class infrastructure, but forgot to step out from 3rd class mentality?

Every state must have a ‘State Sentral’ first to drive the transportation plan?

The current runway at Penang Airport is too short to cater for bigger planes. I heard it is not possible to extend its length, any extension will run into the sea. We all notice the pilots slamming hard on the brakes the moment the plane touches down at Penang Airport, all because of the short runway..

Shriek louder than me. Wet can hydroplane and skid. Ah pek very quiet on this. But anything happen, told you so

Any exyension of aeroplanes runaways subject to MahSing high tower residents approval? Too close to residential can be awfully frightening if plane radar malfunction.

Shriek
Reply to  Call Me Handsome

A large airport takes up to ten years to build and typically ten years before that, planning need to start. Studies are often done 30-40 years in advance so that areas considered are not interfered by other plans and development.

State gomen should contra the onshore airport for offshore airport. Then everyone silent. Everyone happy. Reduced overflight noise. Monkeys all come back to nearby pulau and can nest in peace.

An offshore island for airport is more appropriate. Why allow 1/5 of peng land island to be used as airport. Look the p jerejak is almost under the flight path. No wonder what animals want to live in the island and subject to jet sound? Better leave the island than to be crazy by noise.

make new one in the mainland then closed that always flood forever.airport on island part no practical anymore too crowded

Unlikely to see airport in Kulim, but vegetable/fruit farms that YB Sim will be proud of.

Tedy Teow of MBI International Group has planned to grow vegetables and fruits in Kulim, Kedah, turning it into another Cameron Highlands which is famous for its vegetable farms.

Call Me Handsome
Reply to  Norman

Teddy also want to build a theme park based on Hong Kong comic heroes in Kulim.

make sure the theme park is halal though….hehe

The worst thing to do. Our clients/cusyomers(the touristas) would be forced to wake up 5 hours b4 checkin tome just to get to airport. Who wants to holiday in Penang then. Penang will die.

They only want to keep to themselves. Like tun lang said it is tourist outsider ‘s problem

i can’t believe that a transport ‘ expert’ can be so amateurish in his argument …..maybe we should wait for him to graduate first before listening to his advise…hehe

DAP “Yes” man, how do you want Penang to develop into? More concrete that only your gang can afford? Kind of shock that our CM can think so far, yet no emphasis on digital libraries.

so anyone that you disagree with automatically become DAP yes man? hehe….you have a rather primitive brain up there…

If there is yes men, there is orso no men

Will write a letter to CM to propose an airport beside your house.

He lost his job.