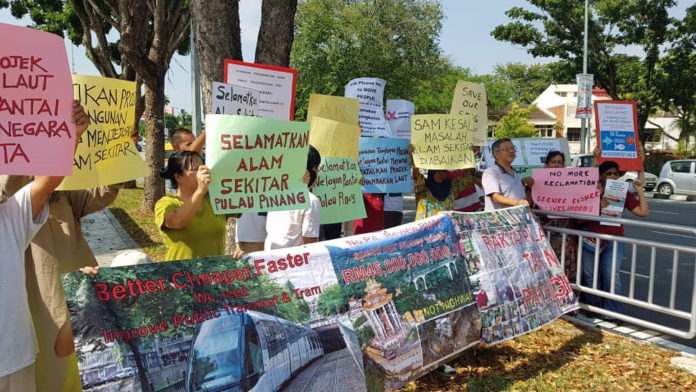 Among them were activists from Penang-based civil society groups, nature-lovers and residents of affected areas. They called for cheaper and greener forms of sustainable mobility, which would be quicker to implement.

The protest was held just outside the office of the Consumers Association of Penang. Many passing motorists honked in support.

Elsewhere, at the Sungai Ara Linear Park this morning, children got down to work to beautify their much-loved community park. Here they are brightening the drab metal covers over a (flood mitigation?) drain.

You can see how the community there takes much pride in their treasured park.

Residents in this area, where the community spirit is so strong, are not impressed, to put it mildly, with the plan to build a six-lane elevated highway that would degrade theirr park. Such an ugly concrete monstrosity would probably require straightening their lovely stream into an eyesore of a canal (large longkang?), not to mention the unsightly pillars holding up the highway.

All photographs by concerned Penangites

Love it! Anil, how about organising Ride Rapid Around Penang Island on a Sunday?
Get Rapid Penang to support this show of green-consciousness & CSR on its part.
Invite the shriekers & the he-he-he to come to Pulo Pinang to enjoy what it’s like to ride a bus.
X-perience will make a difference.

hehe..only on Sunday? show us that you people ride bus on daily basis lar…what …still enjoying the convenience of our roads and highways in your private cars ar? ?

You can he-he-he while riding Rapid Penang & nobody will call you insane!
Be practical for Rapid Pg as this is their CSR to show support on a Sunday, not everyday free ride round Pg island like what you he-he-he without common sense!
Wanna free rides? Take CT1A & CT1B in Ayer Itam.

Only organise rapid rides on weekends? Why not everyday?

I must repeat for the 2 Trolls:
Be practical for Rapid Pg as this is their CSR to show support on a Sunday, not everyday free ride round Pg island like what you he-he-he without common sense!
Wanna free rides? Take CT1A & CT1B in Ayer Itam.

You claim wei = shriek which is one troll. I now you said 2 trolls. Greatest gasing spinner.

Can’t you count with 2 fingers? BUT these 2 are one & the same masquerading as 2 Trolls. Pls relearn English!!!

Try harder. You have not been able to eating KFC. If your finger licking is not enough use your toes and lick them.

Demonstrate at Komtar will be better. No one give an eye, ppl like Shriek can’t be bothered.

You shout here only n push others to do dirty job for you. Dirty Harry.

Your heart is more dirty, destroying Penang with your actions…

So singland, Hong land, johor baru are all self destructive with the development? I thought you have gone to kota bharu to live?

Why still hanging around in peng land, and I thought you migrate to kelantan as you said peng land is destroying. Tung land happy to get a cheaper house a condo build on the developer. Otherwise he had to live in dearer heritage shophouse

You are destroying peng land making it like ulu place just like decline of the port of penang? It is Why peng land have an airport when all flat and good land can be used for better purposes. Why not support the airport moving to kedah if they wanted one badly? When think of airport giving rice bowl, tung land, susu and peng land forum keep quiet

Cities around the world are changing to become more “walkable”. As more and more people move to cities, the benefits of encouraging people to walk are clear.

The benefit of walking besides health is you get to meditate the good things & calm the mind filtering out all shrieking noises & creepy he-he-he!
Walking also cultivate a discipline to plan daily schedules & overcome indiscipline of time management of rush at last minute which can cause one to shriek in madness over delays or lateness to meeting.
Walk more, live longer & sane.

definitely, walking is a much better activity than kau beh kao bu day and night spewing out rubbish at every opportunuty….hehe

Nothing constructive to he-he-spin for today? Useless!

George Town in transition: Young people give new meaning to Penang’s heritage district, businesses adapt https://www.channelnewsasia.com/news/asia/george-town-penang-unesco-heritage-culture-11290554 Those interviewed by Channel NewsAsia said the hollowing out of George Town’s local population actually happened way before the heritage site listing. One of the major triggers hit in 2000, when the Control of Rent Act was abolished. The city’s rental rates shot up between 50% and 300% overnight, according to a report by the Khazanah Research Institute in 2017. George Town’s inner-city core had 16,116 households prior to the abolishment of rent control. Ten years after that, in 2009, the number plunged to… Read more »

Complain about new building overhangs what about wong fei hoong shop houses are orso overhang? From 16k now is over 2k household. Now wong fei hoong houses are overhang. It is like a ghost town. Why pg forum don’t howl at shop house owners? Are they worse than developers in increasing the rent and selling price? Tung land complains he can’t afford longer.
But tung land spin. Developer help him by building cheaper and better house for him and his wife to stay. Ungrateful and don’t thank them?

Such protests repeated many times but si far no desired results. Should protest on an open-top bus going around the island with loud hailers? Then can get notice even from foreign press.

You mean we need Yankees, pommies, kiwis or crocodile Dundee’s to help us?

Sahabat Alam Malaysia (SAM) is ready and willing to work with the state government to plant 10,000 trees on illegally-cleared land near Bukit Kledang, near Ipoh.

Penang Forum should do likewise at the anorak Hill in the island.

Pg forum only talk and biasing. No doing.

Land Grab at Kim Teng Park in JB by PH?

Kim Teng Park is sitting – ideally shaped and sized at 28 acres – has already been turned into a gold mine being adjacent to the terminal of the proposed Johor Baru – Singapore Rapid Transit System. Needless to say, this land has immense commercial potential and value.

shouting from the side line is way too easy…don’t have to do a real job ….go on whining for the next 100 years…hehe

You think peng land is just for greens? Others orso want to have better jobs, transport and reduce green house emissions. Many are forced to go to kl or Sing land to cari makan.

Sure he is not from UNCLE from komtar? How you know or as usual, you spin around like what you did in the past.

hehe…if these bunch of selfish people do not want a road near “their” park .they should refrain from travelling in road near other park, other residential area too…

Can’t believe there are still people in Penang who support more development. We need improvements of the existing ones, not additional buildings or roads. I would not tell people I come from Penang, the place do not have the old-town feel anymore, more like “condos-heaven” , they are simply build beside markets, beside shop lots, in between of landed residential area. Ugly and un-eco friendly…

No old town feeling because your buddy tung land go and buy condo and stay there. Why tung land and you go and howl at owners for raising high rent or selling high? Are they worse than developers? You shop house owners can raise rent and selling price but developers can’t.
Tung land really ungrateful. Developers build cheap and better house for you as you said you can’t afford to live in wong hei hoong shophouse.

You are the worst idiot. You personally claim you can’t afford to live in heritage area as they are very expensive. So you buy from the developer as they sell affordable and comfortable. So arent you a idiot to keep blaming the developer and development? Without them you will be living and blocking the five foot way in heritage area. What an idiot!!

You are really uncouth. I never debased you and it is a fact which you clearly said you can’t afford to live in the heritage zone as it is very expensive. Living in condos built by developers are cheaper. Yet if you call me an idiot and yet allowed by anil then you are a …

Anil very bias. Can allow tung land to insult me with such uncouth word. I written twice but anil never to put up my defence.

U think improvement very chip? Try to upgrade your computer or your? If you have a house or shop, you want digging to be carried out in front of your house or shop? No sense. We have been complaining about roads been surfaced and next week digging and laying utilities.
No sense how much existing infra can be upgraded?
No sense new roads have to serve new areas. You want 3 gens to stay under same roof?

Can grow vegetables in concrete jungle.

Install solar panels on roof is better than roof growing. Singland no sense. Roof farming result in heavy weight on roof and way down to fdn. So no sustainability as solar panels which is light weight, less structural cost, produce energy and reduce power generation and can harvest rainwater and reduce demand from johor dams.