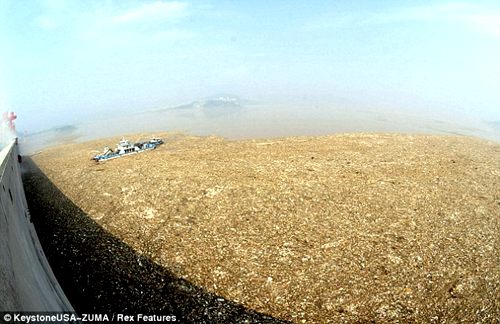 One dam in the southern province of Guangdong was so badly damaged by floods and on the verge of collapse that authorities had to make plans to demolish it. See CRIENGLISH.com report here.

I think there are some lessons for Malaysia, especially Sarawak, which is planning a dam-building spree.

I was in Miri and was whispered that the project team (allegedly) found defects in the Bakun dam. This has not been verified but he swore by his friend who works there. The only indication so far is this week’s announcement that they will be test flood bakun and look for issues that will arise. To me, it sounded very fishy.

The Swak gomen believe that damns last forever which is not. If they start the damn building now, they will run out of Hydroelectric power in 100years, oil, gas and coal resources will be long gone by then. By then they will probably run out of wood to burn too. What to do next?

oi anil, why u not talking bout d measat aka astro dish…

If you know mandarin, you can read my article on The Season of Man make Disaster and Nature Calamity at
http://yidaoguan.blogspot.com/2010/09/2010.html

Trust that the chinese could remedy the situation.

Let’s worry about our very own Bakun Dam.
With our proven history of leaking building and collapse stadium, I fear for the people of Sarawak should catastrophe were to happen.

every time when the communist boasted about some thing disaster followed immediately. In a November 2007 interview with state news agency Xinhua, State Council’s Wang claimed that “no major geological disasters or related casualties” had occurred since the reservoir’s water level was raised in 2006; five days later, the earth in Badong crumbled and the railroad tunnel landslide wiped out the bus and its passengers. But that is not the end, by year 2008, the wenchuan earthquake occurred. The earthquake is believed to be induced by the rising water level in the Zipingpu Reservoir. The reservoir of Zipingpu is only… Read more »

Just take a look at the floating debris and try to image how bad is the sediment that take place quietly and unseen by all of us. If you know how badly is the landslide and mudslides problem of China, do you still think that the sediment is not too bad? Read this: All rivers contain sediments: a river, in effect, can be considered a body of flowing sediments as much as one of flowing water. When a river is stilled behind a dam, the sediments it contains sink to the bottom of the reservoir. The proportion of a river’s… Read more »

Dear Anil,
You and me are at risk of being fined a total sum of 50,000 yuan for publishing so called inaccurate news on weather in China.

Good luck! See if china can find both of us on planet Earth!

I suggest you keep your opinion on China to yourself.
Your visa to China may not be approved. I pity those people who sahre the same name as you.

You should do some research to uncover the potential issues facing our Bakun Dam. Be a local hero instead of fidning faults with China.

After Three Gorges Dam filled up the reservoir, the entire reservoir area suffered various types of land collapse, 4719 landslides, of which 627 affected by the reservoir water, up to more than 4000 areas are at risks of landslide. Lately the Three Gorges Dam begins raising the reservoir water level to 175m, causing the water level of the middle span of Yangtze River to rise to unprecedented height, which surely will increased risk of landslides. The 2008 earthquake at Wenchuan also caused nine dams in Sichuan Minjiang River to suffer different degrees of damage. The area’s largest reservoir – Zipingpu… Read more »

I can’t watch that video – it never starts. There’s a 2-month old report on YouTube about the junk at the dam:
http://www.youtube.com/watch?v=Z85-RM-wXuE

Dam failures are exciting. Enormous amounts of potential energy are very convenient right up until your store does some unplanned work.

Not sure why that didn’t work.
I have now put up a different video about the same problem.

Anil is more concerned about the Gerakan Dam in Penang that is already bocor following Lim Keng Yaik’s resignation as advisor and ‘condemantion’ of KTK.