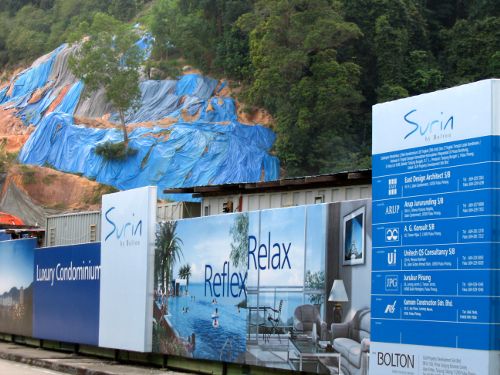 The residents are upset with the Bolton Surin project undertaken by GLM Property on a steep hill-slope, which has previously resulted in flooding in the area. They are also asking the Penang state government to emulate the stand taken by their counterparts in Selangor with regard to Class III and Class IV hill slopes.

Over 80 residents attended a meeting on 13 December with the main press in attendance. “YB Teh gave a short speech and took several questions and his message that we got is YAB Lim Guan Eng is not going to be on the side of the residents and will be alowing the Class IV hill slope construction to continue,” said Aeria.

The residents told the state government reps that if they do not stop Class IV hill-slope construction, they would support any other party, including the BN i.e. they would play off one party against the other.

We, the residents of Chee Seng Gardens, who started the fight to get the stop work order in Sept 2008 are now pushing for the project (Bolton Surin) to be stopped altogether as the hill slope is really very steep (above 60 degrees and maybe more). The recent Bukit Antarabangsa tragedy has shown us that no hill can be developed; (neither can) a slope so steep be made to just stay steep without falling down some time in the future.

This is made worse by the fact that Malaysia has a VERY lousy history of slope maintenance, or rather, no slope maintenance at all. The City Councils do not monitor the construction and only act when a resident complains and pushes the matter. (The authorities) take no action but file it as NFA (no further action). Developers just cement up or wall up these steep cliffs and expect that the cliff will defy gravity in perpetuity.

Our hills are made up of different soil from that of Hong Kong. Our government administration’s monitoring and (track record in) ensuring developers follow guidelines is pathetic when compared to the efficiency of the Hong Kong government. The only way to avoid future hill-slope tragedies in Malaysia or Penang is to stop all hill-slope development (of) beyond Class III (25 to 35 degrees slopes) and Class IV (> 35 degrees gradient) hill slopes.

In view of this, the residents of Chee Seng Gardens, who moved for the stop work Order in Sept 2008 met on 13 Dec 2008 and over 80 residents unanimously called upon the state government of Penang, under the DAP, to heed our calls and to do what is POPULAR among the people and what is RIGHT for the ECOLOGY of the STATE and that is to cancel the Bolton project and to thereafter rehabilitate the steep hill slopes in Chee Seng Gardens.

THe pictures shown above are taken by us and show a slope of no less than 60 degrees or even more. The developers’ (GLM Property) claim that they will cut back the hill to finish off at a gradient of 38 degrees is ridiculous as the hill top above is already forest reserve and state land. There is no way to cut back.

We will persist in our attempt to get the new state Government to heed our call as we voted them in to show us a change for the better than the old administration under Gerakan and Umno. Persisting in steep hill slope development that puts the lives and property of innocent long-time residents in the area at risk (in harm’s way) is NOT the way to stay in government over a single term.

OUr next move will be to meet the CM and thereafter to stage a peaceful demonstration should our efforts not succeed. Further actions will follow to show our State Goverment that hill slope development on Class III and Class IV hill slopes MUST CEASE and that the existing CLASS IV project must be cancelled

George Aeria
for and on behalf of Chee Seng Gardens Residents

I have some photos of the project at Moonlight Bay. I find it atrocious that they cut the whole hill to please 22 rich people. The slogans on the signboard are so snobbish too. Too bad I cannot find these photos in my computer right now. Each time I take my children to the beach, I will be shaking head in disbelief that our state government approve the project.

I want it stopped too because its ugly from where I view it everyday. It’s funny to drive up the once scenic Batu Feringgi route. Yucks!

Sure – vote in the same government that had caused you the same headache. If I were to ask George to contribute Rm1 for a fund to fight the case in court, I bet he will quiver away in fear. So come on, vote for the BN and you get crap. My vote was right and you have no right to push your ideals to us. I think you are wrong. All of you are wrong. Anil, TBRA and even the residents. When you had the opportunity to object to the previous govt, were you ever that vocal? COme on!… Read more »

I think what needs to be highlighted here is that we are not doing this because we have got nothing better to do and and have a penchant for criticising the DAP government.

Our lives are at stake damn it!!!

Lim Guan Eng, why don’t you come and live in one of these houses which incidentally has been here for donkey years. See if you can sleep on a rainy night.

it is really ridiculous to think that they can build a couple of blocks of condominium on such a steep slope. one doesnt need to be an engineer to know that this slope is >60 degrees. i really hope this project will be scrapped!!

I strongly believe CM is fully aware of this (residents’ complaint/feedback) as YB Teh was there during the press conference. PR government, its time to show that you are different from the previous ones. Act before its too late.

in the next ge, they cant vote gerakan cos gerakan was the one who approved the project.
and they not going to vote dap if the project continues.
anil, looks like you have to run as an independant there.

The DAP-controlled government of Penang lacks proficient and good managers, period. Look at the screw-up at the King of Tennis carnival. There are many more. What Lim Guan Eng need to do is to quickly look for good people available now in Penang to help him row the boat which might just sink come 2012/3. A huge “Victory Dinner” does not guarantee re-election YB! Remember how your Dad lost his Tanjung I and Tanjung II eventhough the ground told him he would succeed?