Update (The Star): “General Accomplishment Sdn Bhd was fined RM30,000 in default three years jail for carrying out earthworks on Bukit Relau without a written permission from the local authorities. The company’s general manager, Rohana Shariff, pleaded guilty on Thursday to the charge on behalf of the company before Sessions judge Khairul Anuar Abdul Halim.”

Now let’s see what happens next on the hill-top. They will probably lie low for a few months, maybe even a couple of years, and then… But the big question remains unanswered and will not go away: How did the State Planning Committee rezone this hill-top land to housing?

A new photograph taken on 6 July shows that the hill-clearing goes quite a way down, turning the hill into an eye-sore. Meanwhile, the Penang Forum Steering Committee has written to the MPPP. 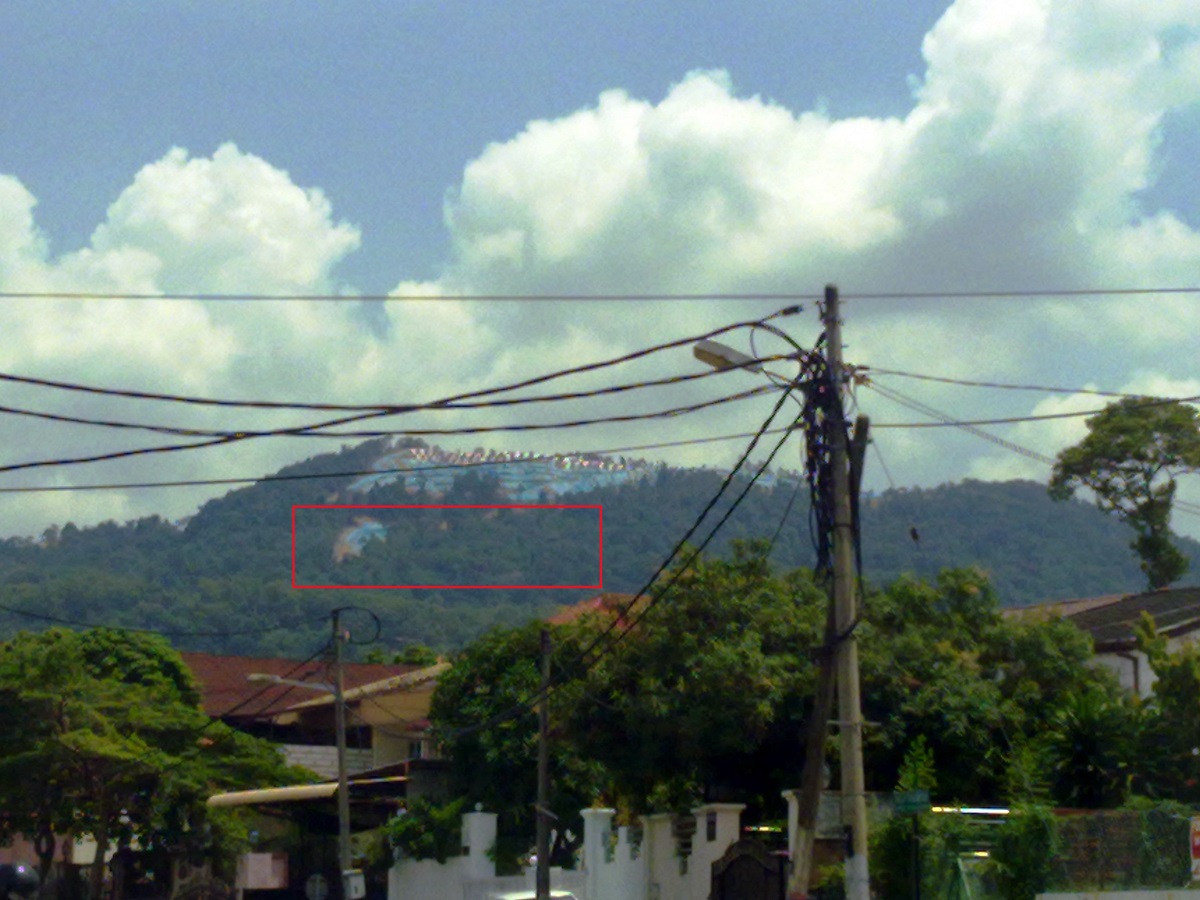 The destruction of the Bukit Relau hill-top is not the first time such “in-the-face” flouting of planning laws has occurred. There is a breakdown in the monitoring and enforcement process in the Council. To prevent a recurrence of this, the Penang Forum Steering Committee now demands that a thorough inquiry be made by an independent committee (majority consisting of outsiders) of the internal and external failures of the procedures in the Council that led to this incident.

The Steering Committee of the Penang Forum would like to commend the MPPP for the ‘Stop Work’ Order on the illegal hill cutting at Bukit Relau and also to taking legal action against the perpetrator of this illegal act. It is shocking to Penangites that hill clearing at this height and of this massive extent can be conducted in full view and over a lengthy period, without alarm bells going off and urgent action being taken.

WHY? Why did it require a public outcry before any action was taken? Anyone looking from any western facing window of Komtar from the 9th floor upwards would have seen this shocking clearing taking place over many months. It would appear that the action was not just illegal but blatant and in total flagrant disregard for the law. The clearing is total and unmitigated, it does not leave anything standing, not a tree, a bush or a rock; top soil has been washed away. The bulldozers have relentlessly bared the entire top of the hill, brazenly, not hiding their actions from anyone. Why?

RE-ZONING We have come to learn that the area has been re-zoned as ‘residential luxury bungalows’ under ‘special projects’, thus allowing the developers to believe they could ravage as they please. The Special Projects above 250 ft exemption was meant for public interest infrastructure projects, most definitely not for luxury bungalows for the wealthy and profit opportunities for developers.

THE HILLS The hills of Penang are environmentally sensitive areas. The environmental and social implications of such a mammoth project on Bukit Relau are very severe including deforestation of water catchment forests resulting in landslides, flooding, impacts on water supply etc. The impacts would extend beyond the immediate area to the downstream areas, affecting several hundreds of communities and the general public.

DETERRENCE The question being discussed publicly now is will the MPPP take into account public interest in pushing for a deterrent sentence or a mere financial penalty that only seems to embolden developers to continue to flout the laws. Landowners/developers responsible should be blacklisted and no application from them should be approved for at least five year so that those who want to flout the law will think twice.

C.A.T. We appeal to the MPPP and the State not to be satisfied with ‘too little, too late’. These kinds of shameless and scandalous actions must not be allowed, particularly by those seen to have ‘connections’. Undesirable and unlawful precedents must NOT be set. As much as re-zoning can be done, they can also be withdrawn. We look to our leaders to show us the kind of moral righteousness that we so rightfully have come to respect them for.

Rats of Chowrasta market smell no more worse than this one “unbelievable” fine of night soil proportion. The hills of Penang Island are now so highly valued prime bungalow lands as “chay sua kua hai” fengshui-inspiration & off-limit privacy, anything goes behind raped trees if one has the millions & billions to thumb down the puny “hoot” land laws & similarly re-enactment of “boh hoot” antics of past ostrich administration of lost decades but with a difference in the face of cosmopolitan richie development of the untouchables. So much of such rotten hill land development that can even attract SingLand… Read more »

tunglang,
Its so pricey not just ` chay sua kua hai `, its good feng shui. Hill slope and facing the sea. In the past rich people houses and graves are situated on hill slope because it is deemed to be good feng shui.

Hills should be left as cementary to promote good feng shui?
A sacrifice by the living to pleaee the dead?

Look again a the charge. And then look at the sentence meted out.

How about the sentence of the daily charge?

What is happening? Is the law being mocked by the rich and famous?

Trouble, trouble, I see trouble ahead.

If the DAP-led State Government was prepared to lose votes on implementing the no-plastic-bags rule for supermarket patrons, why is it now so ever servile in this instance?

On the first, it stood on principles. On the second, it seems to have lost the plot.

Frankly speaking, this is an utterly show of big talk bluff of “whoever breaks the law, face the music” for the environmental conscious Penangites whose future on the soon to be Rich+Famous Cosmopolitan Penang Island is in dire straits. RM30K is nothing but an encouraging incentive to break the land law first & pay the puny fine on a day of inconvenience at the court latter. Doesn’t matter if the controversial law of conversion (of one’s faith) have no over-riding power on the amendable law of land conversion at the stroke of 3am (if one believes in the supernatural in… Read more »

BTW, any news about the special project behind Sunrise Garden, Sg. Ara? PKR or DAP or BN, all the same. Politicians will always be politicians.

MPPP sleeping. Penang State Government sleeping. They only work when rakyat starts complaining. It is so obvious. Apart from the Komtar Tower, Those coming from Penang Bridge can see it clearly. There are Dun & EXCO members coming from B’worth via Penang Bridge, yet they just keep a tidak apa attitute. Heads has to be rolled. Who is the Exco concerned.

RM 30k is totally inadequate. MPPP is totally out of touch with reality. Absolutely disgraceful.

Reflection,
30k fine is by the Session court judge Khairul not by MPPP

Building so many condos as if The Minions are migrating over to live in Penang ???
If so, the street food business should be booming with more customers BUT we have not witnessed that 🙁

RM30k is just a drop in the ocean!
What is next now? Submit proper written earthworks plan and continue work?
Please note that nothing is said about project being stopped, cancelled or the area being replanted again….

(Were) elements of corruption … present(?) A THOROUGH inquiry must done.

If the PR Penang Government is strong enough to rule, then it must be strong enough to face the situation and prove to the rakyat the measures to correct mistakes and others to ensure due governance in due course!

30k fined for failing to obtain permission.
Now it has been cleared so can get permission easily
So 30k is really sap sap soi

It is high time the Penang government get serious on these destructive land clearing activities lest they be looked upon as being the same as the previous BN-led government. Personally, I am hoping that the present Penang government can set the standard and example of good governance and responsible government for the rest of the country especially the Federal government. For this, they have to made of sterner stuff and adopt a no nonsense approach much like the PAP-led Singapore government. And above all, all the ‘kam-cheng’, ‘kau-tim’ and ‘chin-chai’ mentality has to be discarded by all, starting from the… Read more »

You see politicians will always be politicians. They will say something and do something else. Whether they are DAP, PAP or BN does not matter. The rakyat’s problem is that they have to choose between one devil and another and so the pick the one they think is the least devilish and at this point Penangites genuinely feel that the PR state govt is better than their BN predecessor. But make no mistake they may be cleaner and more competent but even PR politicians are no angels. They too have cronies to satisfy and families to ‘look after’. Power corrupts… Read more »

Penang is killing its golden goose for golden eggs.

One day Penang Hill will be flatened for more high rise condos!

The writer should find our when the clearing started and when it was discovered and action taken, then reader can decide whether there is a negligence by authority. Normally illegal clearing like this is done very quickly to avoid being caught. My estimate clearing like these can be completed in a week or less. I live just next to the cleared hill and was not aware until the earth work was completed with no return. My suggestion is to ban development on these pieces of land for the next 99 years for rehabilitation. Fined the land owners, not forgetting those… Read more »

Penang wanna be like cosmopolitan cities like Singapore or Hong Kong with high density concrete jungles ?
Penang Pakatan & BN better think hard.
Singapore small but a garden city with excellent MRT and Public Bus system linking whole island.
Hong Kong is a world finacial centre able to create job opportunites to sustain the lifestyles of the people.
Penang “syiok sendiri” a lot and is destroying the beautiful nature.
Sad but the truth hurts !

There is no way at the moment Penang can be compared to Singapore. And at the rate things are going I don’t think we will ever be on par with Sg in terms of public infrastructure, space and amenities. And this goes for the rest of Malaysia as well. Oh incidentally, I think MPPP should not bother to even charge this company if the fine is going to be 30k. The amount they pay their consultants and technical advisors and legal personnel will probably exceed that amount. MPPP should be given a medal for excellent enforcement work and the developer… Read more »