Have a look at what could have been possible instead of the ugly concrete structures in the Penang Botanic Garden.

And this is some sort of research and coordinating outpost set up by the Thai government up in the mountains in the north of Thailand near the Burma border. The outpost, which blends with the environment, aims to help the many village councils engage in agriculture, farming, orchards and animal husbandry on the mountainous slopes so that they can be self-sustaining in food and generate some income by selling any surplus.

The minority groups here – Aka, Lahu, Leso, Wa etc – live in poor conditions; many among them are refugees from Burma and China.

Contrast that with the horrible arches in the Penang Botanic Garden: 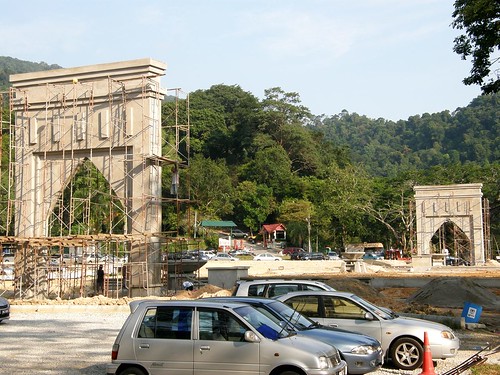 One Penang resident described the arches as follows: “They look as though someone started building a gothic cathedral and ran out of money after erecting the door frames. Archaeologists will puzzle over them a couple of centuries from now.”

Why can’t the arches be dismantled? Too embarrassing, is it – so they would rather leave them as an eye-sore for future generations to marvel at our stupidity.

What we are losing

Here is some information from a source familiar with the background:

Actually, the Penang Botanic Garden once had a masterplan, the Clive Justice Master Plan, which was just not implemented. Clive Justice was a Canadian Executive Services Overseas (CESO) volunteer who was working on the landscaping of Kuala Lumpur in 1985. (The CESO programme is a Canadian programme of senior and experienced professionals about to retire and who wish to contribute in various parts of the world. They are only paid their expenses and no consultation fees.) Clive Justice had designed a number of Botanic Gardens in Vancouver and he agreed to help translate development plans of the Penang Botanic Garden into a physical development plan.

The Penang state government then requested his services from the Canadian Government and Clive stayed in Penang for six months working from the Town and Country Planning Department with local planners. The masterplan was presented to Tun Lim Chong Eu, the then chairman of the State Planning Committee, who said that it should be exhibited and the views of the Penang public obtained. This was done (Kee Phaik Chin was chair of the PBG management committee at that time.)

However, it was not possible to implement it at that time as the expansion of the gardens was not legally gazetted and therefore could not be part of the gardens. The JRR was asked to make an estimate as to the cost of implementation and they came up with a figure of RM7 million. In the meantime, various politicians who were chairing the management committee started carrying out ad hoc development projects such as the quarry gardens, the surau, the garden sales centre and the hawker centre – which were not in the plan.

The Penang Botanic Garden Department then produced a “masterplan” in around 2003 which included an expansion – with the Rifle Club as part of the plan and a ‘gardens mall’. The Department did not see the expansion as being part of the Botanic Gardens but as an add-on for a public park. The old garden of 72 acres would be the “core” of the gardens and the new area as a public park with car parks for the rifle club and people going up the hill. This was a completely ignorant understanding of the development of the park by the gardens and the JPS. The state exco is still in the dark to this day.

The destruction of the Garden is still ongoing, the most glaring is the dismantling of the fern house. And with the removal of the plant houses, the ferns are dying as the heat is drying up the ferns. Professor Holttum, the last British colonial curator of the garden came to visit the garden with Chiang Kok Choy, the last qualified curator of the garden who retired in 1979. Holttum was 90 at the time. After his term at the Botanic Garden in Penang and Singapore (a joint appointment), he became the first professor of botany at the University of Malaya in Singapore; then he returned to England and became professor of botany at the University of Cambridge. At the fern house, he indicated the fern species he had planted in the 1930s and these were still there.

With the removal of the plant house by the present Penang Botanic Garden adminstration, most of the ferns are likely to be lost, including the stag horn fern that was named after Prof Holttum. The ignorant actions of the present garden authorities are beyond words.

Let me tell you a story about this botanic garden. I had a chance to talk to one senior gardener who was about to retire and I was amazed at his wealth of information on the administration of this garden. He would have retired by now as this conversation was a few years back. He was lamenting to me on the loss of character to this garden when it had a new superintendent. This person is a graduate from U. Pertanian. Now what does a UP graduate know about horticulture he asked me? The English Garden(near the entrance close to… Read more »

Hate those arches .
Looks like tombstones or a bomb out building.
Take a look at the Bukit Bintang ain arabia garden here.
It looks like somebody died in the garden and was buried there.
Waste of money, waste of building materials and a waste of time doing arches.

I have seen the Thais too , from North to South.
Nearly all of them are using natural materials and their designs blends in their backgrounds and environment.
Who wants to see giant tombstones in a garden?
We can go to the cemetery to see tombstones.

Having just come back from a trip to Thailand after having last been there 20 years ago, I can tell you with a certainty that the Thais are so far ahead of us in so so many ways.

The problem is that we Malaysians are sometimes too pompously arrogant about how right and how good we think we are that we dont see how wrong and how far left behind we are.

Hello Ong Eu Soon. You are only critical when things invovled the DAP led government & CM LGE. You only know how to criticise. Don’t you have any goods things to say? Look at yourself first if you are one of the ex-state policy makers. What have the ex-state government done for Penangites. There were countless blunders and where were you then?

The nature should be preserved. Look at the number of trees that were chopped down. The politician are destroying nature in the haste to build more white elephant projects which do not blend with nature.
Where is the bamboo garden that was launched some times back.
The federal government has no feeling to the requirement and wishes of the local population.

Not only those ugly developments going on at Botanical Garden, I even saw white coloured liquid in the drain just after the Orchid House (Orchidarium). What kind of mentality are those working in the Garden?
And if you happened to exercise there in the morning, do watch out for garden workers riding motorbikes. Some of them are riding around as if chased by ghosts! You have to watch out for them, not them for you walking pedestrians.

To think that we the people of Penang can be taken for a ride by the handful of politicians we elected to destroy our heritage and our rights to a basic need just for their own gains is beyond comprehension. To think that these politicians can totally ignore the plea of the people for decency, walk all over them and discard them after extracting their votes and their rights is inhumane. … the worst kind — KTK and gang I am referring to you guys in particular. Indeed, you are a shameful lot. I hope the present CM and gang… Read more »

Ask LGE why he is so reluctant to interfere in this so called upgrading project. When LGE is in the opposition, we can understand that he has no authority to do anything except critising. Now he is the CM, he seem to be ignorant about everything and anything, as if he is powerless to right the wrong of the previous administration. LGE has a very strange perception about development, anything call DEVELOPMENT is most welcome even if it means the destruction of the garden. He seem to be reluctant of interfering afraid of losing the federal funding… It seem like… Read more »

what a waste..i used to look like paradise…and now all i can see is concrete

Who is the responsible for this?
Is this reversible?