A press conference in Park Royal Hotel in Batu Ferringhi to express concern about a high-rise housing project near a low-density low-rise neighbourhood was disrupted by a rowdy group using rough language this evening. 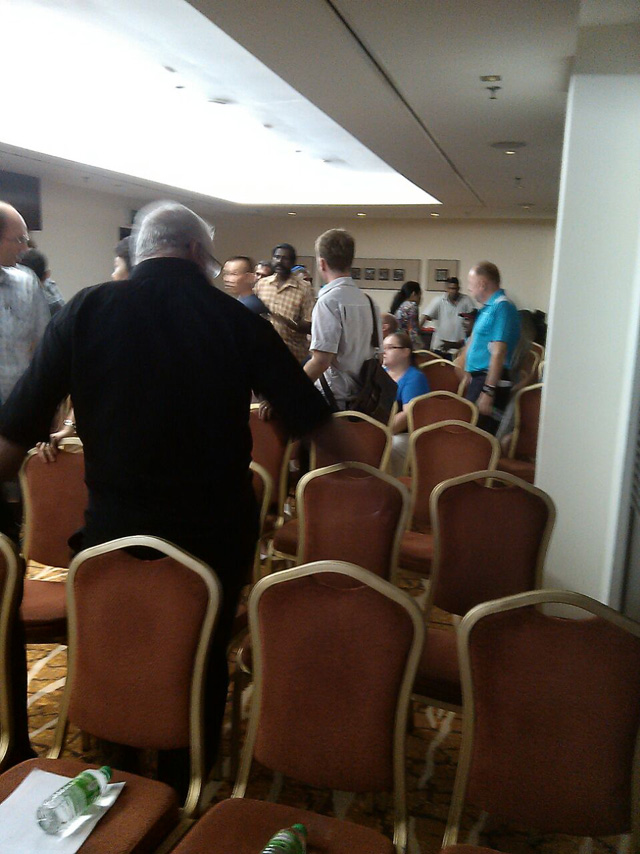 The press conference was organised by several Batu Ferringhi residents, mainly those who had settled there under the MM2H and Talent Corp schemes. Representatives of the Tanjung Bunga Residents Association were also invited to the press conference.

The aggressive and belligerent intruders claimed somewhat incoherently that the organisers wanted to demolish a Hindu temple. According to one eye-witness, the rowdy group chased everyone out and told them to go back to their own countries. “Ini tanah Malaysia,” they said.

Hotel security contacted the police, who then evicted the intruders. The organisers were unsure of the affiliation of those who disrupted the press conference.

The project in question is Orientside Development.

These are a couple of the high-rise towers the residents are worried about: 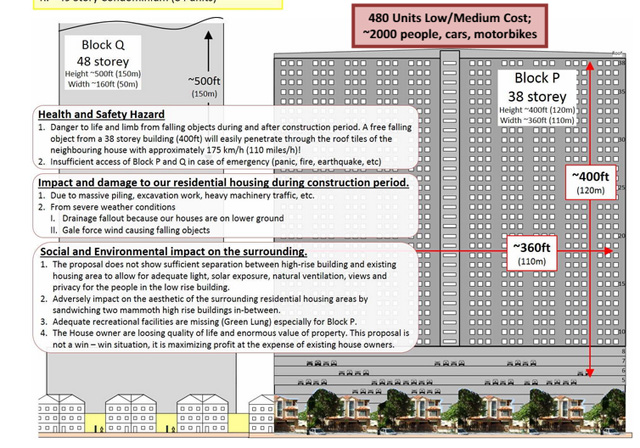 The residents were not aware that such a higher-density project would be built so close by when they bought property in the quiet neighbourhood. Several of the residents now want to leave Malaysia while others could follow suit if they can sell their properties. Some may have already gone to Bali or Thailand. Those that have gone back to Europe are unlikely to recommend this place to their friends.

In the Penang Structure Plan, Batu Ferringhi is supposed to be in the “secondary corridor” i.e. low density (15 units per acre); so some are wondering how this higher density project could even be contemplated. The affected residents were told that the new project nearby would be 30 units/acre. Is this correct? Has Batu Ferringhi now become a “primary corridor” – and how did this come about?

The problem is compounded in the absence of the Penang Island Local Plan, which though approved in 2008 has not yet been gazetted. Without a Local Plan in force, most developers are now asking for the maximum density they can get. But can the supporting infrastructure – roads, sewage treatment systems, utilities – cope with the additional load?

One observer felt it was ridiculous to expect the residents to sort this out with the developer; isn’t this the job of the state planner?

Did you all know that a 15 storey hotel is being put up next to the Rasa Sayang hotel! No public announcements although the plan is in the office @ Komtar. They have already started putting in the road which begins at the beach road opposite Bayu Ferringhi Residents. It is on land that was part of The Army Camp.

The people who complains are just selfish!!!
Just say they want to keep the area to themselves.
There is no basis from their complaints.

Can we assume that you live facing a brick wall?

Over developement on the island will have dire consequences. There is talk of people leaving the the island. A lot who are planning to leave are expats who are changing their minds about mmsh.
When all have left we shall be looking at a beautiful Penang that we had a long time ago. The only problem would be how to get rid of those ugly blocks of concrete and brick that are sitting on our beautiful hill slopes. Well people, it is high time we took ownership of oue surroundings.

You are right, all the Penang lang good at making noise in the internet sphere. When it matters the most in demonstrating that they disagree vehemently on a matter, such as this matter, they go missing, hiding under their pillow. Pehi dah lu olang Penang, cakap saja pandai, NATO!!

Actually you have no control over the surrounding area (belonging to others) of the property you bought. Make sure you know the plan for adjacent development before you buy a property. Then again, any proposed plan may change. I doubt any part of Malaysia has a local plan when there is no local election like in Taiwan. By the way, I have just returned from my holiday in Taiwan where the KMT party lost the local election big time. The grouses of the people (especially the young) was that salary never increases for ages in tandem with development. The average… Read more »

Most penangites are kia-si types. Whenever there’s a commotion they quickly stay away and not brave enough to show their physical support and rather be armchair critics. Calling for Local Plan in the web won’t help the implementation. Do you think Penangites dare to camp on the road like Hong Kongers asking for Local Plan to overwrite the over-development on the island ? Nope for sure.

The distinctiveness of Penang in their natural state will be lost in no time. The green hills, the emerald seas, the little Malay kampungs, the tranquil fishermen’s homes + slow rocking boats, the sandy beaches with siputs, the durian farms + Hakka homesteads, the public gardens, the quiet + serene + ‘unobstructed’ suburb environment, the clean + clear brooks meandering from pristine hills, the shady rainforest trees lining the roads, & the once slow-ride of Penang Hill Coaches (now replaced by this madness of Speedy Gonzales Fridge Train by you know who, but helplessly accepted by our venerable Niau Kong).… Read more »

We will not be staying at this hotel when visiting Penang in 2015 as locals are the losers…..
….

Some people have no gratitude. Teluk Au in Perak Road was once a slum areas infested with gangsters and undesirables. The previous BN Gerakan govt developed it with affordable high rise affordable house that come with proper roads and amenities. Look at how the previous govt is able to plan with concern for the environment and the poor. In Batu Feringhi it was done without destroying the environment and its surrounding, In Teluk Au it was done by creating a congested slum which was an eye sore into one of the most beautiful and enterprising areas surrounded with nice and… Read more »

Don Theseira : You are very right. We have to take ownership of not just of our surrounding but our island as well before it is being destroyed by this mad cat

Batu Feringghi is one of the last bastion of a developed natural beauty where tourist and the people can enjoy living in a natural, peaceful and nice environment. Although Batu Feringghi have been developed by the previous BN Gerakan, it was done with care without harming the natural environment and pollution of the sea. Just 1 term by the CAT govt is enough to destroy the natural serenity of Batu Feringghi with pollution of the sea getting worse. We must put a stop to this mad fast track development

To kee and gan Eng Hui, will you be making such uncalled for remarks if your home is 20 meters from this Mega developments?

I sort of quite agree with gan eng hui, some people after having bought some nice properties on the hills or reclaimed land, these same people they will shout at the top of their lungs, stop building houses on the hills or no more land reclamation as we are environmentalists !!!

Tak boleh, i am talking about some hypocrites, wah tak cakap lu la.

Rowdiness at Padang Kota (Esplanade Speakers Corner) all these years went selectively unpunished by the authority; and hence become a menacing culture used to intimidate to halt any proper events ?
Too many proxies and will the real culprit ever show up bravely ???

Don`t jump to conclusion !. Who are you trying to blame. Don`t simply use every incident for your purpose. Both sides of the fence has its rowdy and abusive characters and we do not even know whether its political motivated or motivated by the developer.

Why is it that these ang mo kau (westerner) always like to interfere in others` people affair not just here but throughout the world like Hong Kong, Ukraine, China, Latin & Central America, Africa and the Middle East etc etc. Their economy is coming down especially the US and the West. Russia is coming up so is China that is moving up so fast it is now confirmed as the No. 1 economic power. Soon China will be the No 1 military power. With the co-operation between China and Russia, both will be the top military as well as economic… Read more »

Latest report showed that China is now the No 1 economic power. The US better butt off our affair. Its none of their business. Anyway look into their own mirror first before they talk of democracy, human rights and the Sedition Act.

Where is hotel security??

Where is the Penang Local Plan?
Fast-track opportunistic development in its absence or missing forever like MH370?
Btw, who is the approving authorities & who is the top man who OAK for this twin ugly behemoths in a once serene green corridor with an emerald sea view?
What an ugly impression of MM2H Penang to expatriates, retirees & foreign investors.

Now, who are these gangsters (looked like on payroll?)?
Polis, mana lu?

Bro, are you still with your theory that the captain of Mh370 was the culprit ?

isn’t this the job of the state planner? or the responsibilities of the State Govt and CM to ensure that guidelines are being followed. Is the Cheap Minister pandering to the developers as claimed by many in the blogs(?)

Penang Developers just complaint slow approvals for new projects meaning more high rise on the way once there are federal clearances ? With weaker ringgit now more willing to invest in properties to safeguard the future?

Oh no not another one. What is happening to Penang?

Rowdy behaviour is not uncommon when there are Jaga Kereta thugs that would bash you up if you refush to pay.

What is happening?
Gangsterism, it seems has made its mark in property development protection.
With Money, Can Talk / Shout. Can Also Flex Gangster Muscles.
Will the authorities (Polis, Keselamatan, MPPP Licensing) take serious note.
Not until the day the public decides it’s high time to take matters in their own hands like the Farlim case of 1980s.