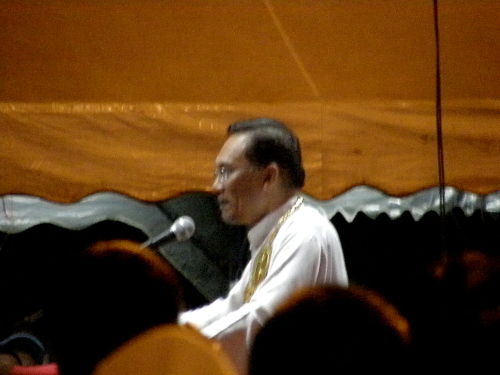 Anwar has sharply criticised the federal government for overcrowded general hospitals such as the one in Seberang Jaya.

He said he was responsible for the construction of the hospital more than a decade ago. “But look at the state of the hospital today,” he said during a ceramah in the midst of low-cost flats in Seberang Jaya last night. “It is so overcrowded and I feel sorry for the poor folks there.”

The rich and the better off have the option of seeking immediate treatment in private hospitals but the poor have no choice but to wait at government hospitals. “If they need heart surgery, for instance, they might have to wait for eight months,” said Anwar. “But by the seventh month, they could have dropped dead.”

In contrast, the rich, he said, could turn to private hospitals for immediate treatment, and they could be operated within a couple of days.

“Mahathir didn’t have to wait very long for his treatment,” he quipped.

His call for something to be done about overcrowded general hospitals will please the civil society Coalition Against Health Care Privatisation, which has long called for greater government funding of general hospitals to improve quality and stem the brain drain.

But Pakatan-led states such as Penang are also promoting medical or health tourism, which the Coalition is against. The Coalition feels that an emphasis on medical tourism will further undermine general hospitals as it will aggravate the brain drain of doctors and specialists from the public sector. This exodus of skilled staff would quicken if private hospitals are expanded or if more private hospitals are opened to cater to the influx of wealthy tourists seeking medical treatment.

Overcrowding in one thing. These days pensioners and poor folks have to look for means to get medicine which the Govt hospitals are not giving free anymore. With price hikes, everything has gone up so much that one can hardly have food for the family let alone getting medicine for their sickness. Why did the Govt do such a thing? The rich can afford but we can’t. These days if you don’t have money, don’t get sick. Please. Anwar have all these changed once you come into power. We can’t take it anymore.

may I remind all the replyers who are talking about… “pendatang asing sleeping comfortable in their hospital beds whilst locals sleep on the floor” choose to do so! May I remind those people also that “medical tourism” is one of the big projects your Govenrment is initiating. it brings in an incredibable amout of dollars as well as jobs. those “pendatang asing” pay a hell of a lot of money for that bed, the care and the meals, I should know I’ve stayed often enough in hospital, in sarawak, sabah, the mainland and penang. what beats all, locals as well… Read more »

Take a look at this article of mine:

Over crowding in one thing. These days pensioners and poor folks have to look for means to get medicine which the Gorv. hospitals are not giving free anymore. With price hike everything has gone up so much that one can hardly have food for the family let alone getting medicine for their sickness. Why did the Gorv. do such thing? The rich can afford but we cant. These days if you dont have money dont get sick. Please. Anwar have all these changed once you come into power. We cant take it anymore.

Don’t forget to visit Kangar GH,there is no specialist doctor in this hospital.Sometimes,the ambulan has no petrol !

dont think decent health care for locals and medical tourism are mutually exclsuive.
fundamental planning for staffing is core. and good policies will attract our sons of soil back to serve and reverse the brain drain.
TIME FOR CHANGE.

Both medical or health tourism and General Hospital improvements can be done like many developed countries do. So we hope the PR govt will do much about these two aspects. Cheers.