If you think Penang is already congested, well, you ain’t seen nuthin’ yet.

Three more lanes of traffic will pour into Penang Island once the second bridge is completed by 2013, if all goes as scheduled – adding to the three lanes of incoming traffic on the now widened existing Penang Bridge.

I dread to think of the congestion in Penang by then.

A group of local engineers and I took a boat trip to survey the progress of the 16.7km second Penang bridge. 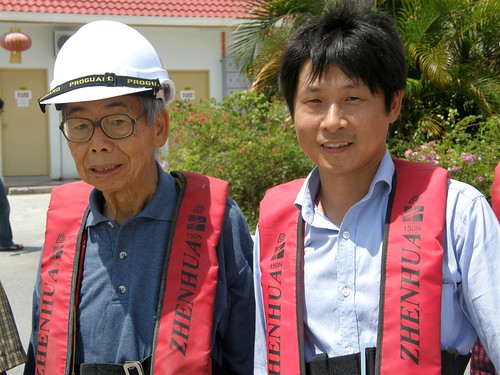 Length over water: 16.7km
Overall length: 23km
Height of bridge above water at highest point: 35.6 metres (to allow ships to pass underneath)
Project cost: RM4.5b
Steel piles: 7800
Starting point on island: Batu Maung (not far from the DHL facility along the Bayan Lepas coastal highway)
Starting point on the mainland: Batu Kawan (not far from the Batu Kawan Stadium and next to Patrick Lim’s now aborted equestrian centre)
Speed limit when complete: 80km/h 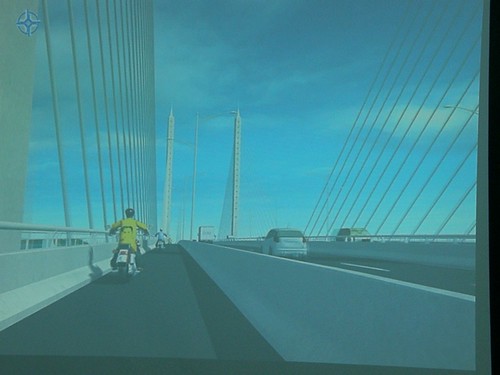 The bridge was initially supposed to be two lanes each way plus a motorcycle lane.

But before construction could begin, the plan was changed to three lanes each way and no dedicated motorcycle lane. Let’s hope one of these three lanes can be dedicated to public transport. 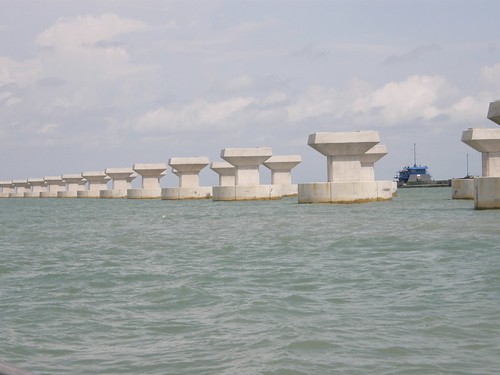 Progress of substructure (piling and pier work): This portion of the bridge is handled by CHEC, involving 200 workers. About 70 per cent of the substructure is now complete. The work is scheduled to take 33 months – already 23 months have passed; another 10 months remain. 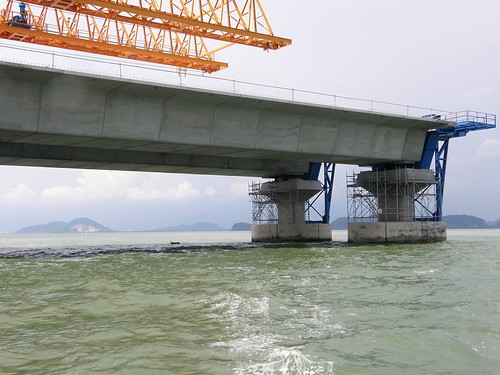 Whether the bridge can be completed as schedule will depend on UEM, which has to put up, lego-like, the box girder beams above the completed piling/piers that CHEC has put in place. So far, just one stretch has been put up.

Overall progress: The CHEC chief engineer said the work on the second bridge is 40-50 per complete. A more conservative estimate might put it at 20 per cent.

Other points of interest

I asked a CHEC engineer if the second bridge was quake resistant and if so, what level it could take. He replied, yes, the bridge could absorb quakes of up to 8.0.

The piling goes 78 metres below the sea-bed. The cement mix used is Grade 50 cement plus river sand from Sungai Perak, transported up to the site on 580-tonne barges.

The sea is really shallow – varying from six to 11 metres deep. One engineer told me this was probably the result of siltation arising from land reclamation north of the island. In comparison, the sea around Penang Port is being deepened to around 20 metres.

We really need to move away from private vehicle usage and promote greater use of public transport. Putting in place insfrastructure for motor vehicles actually means encouraging more people to use cars. There is a limit to the number of cars our little congested Penang Island can take before life becomes intolerable and the quality of life plummets.

Why blame the state government when most of the power has been robbed by Gerakan/UMNO Federal Government? If the roads are widened, UMNO/Geakan Government can put more buses in the exclusive bus lanes only and the bueses will not caught in the traffic jams. If UMNO/Gerakan government has GPS in their buses, then they can incorporate time monitor screen to show in real time the arrival of the bus. But the Federal Government is spending money on themselves.

… has GPS in their buses, then they can incorporate time monitor screen to show in real time the arrival of the bus.

I hear Edinburgh has just introduced this feature. Quite a number of other European cities have this.

Look at this example from Seoul:

When can we see bus stop displays and information boards like that in Malaysia?

Maybe the problem is the culture ingrained in us. Although the public transport has improved, not many are taking it and still drive. When I finished my SPM in 89, the buses here were awful. They are much2 better now.

there is this debate here – do we build more roads to alleviate the jam or to contribute to the jam? if we don’t build more roads, then there would be a jam. but if we build the road, the cars will keep on coming. no doubt, a perfect solution is that everyone leaves their cars at home and start walking / cycling / takes public transport. however, given that the msian weather is either too hot / too wet, and the public transport is unreliable / inconvenient (does not go directly from Point A to Point B), ppl would… Read more »

a perfect solution is that everyone leaves their cars at home and start walking / cycling / takes public transport. however, given that the msian weather is either too hot / too wet… One possible solution is to grow more roadside leafy trees (not desert looking palm trees) to make it more shady for cycling to be an enjoyable, attractive and healthy mode of transport. Add a few more wood benches and this will give cycling an attractive option since one can get to relax and enjoy the moments. Tourists will also find this cycle-friendly choice an excellent way to… Read more »

If there ever is a perfect solution it will be this — everyone rides on the Number 11 Bus — you know la, walking. But you won’t want that, do you? So back to Plan B — Buses / Subways / Mass Transport System I think I have highlighted the problem of Putrajaya having ALL the control of ALL Mass Transportation system in the WHOLE Malaysia in another post. Which means, until Penang can grab back the RIGHT TO DECIDE which Mass Transport System it wants, whatever buses or subway or whathaveyous will become yet another way for the BN… Read more »

Since we are introducing so many lanes, why not have a lane exclusively for Buses!…and, mount cameras to catch offenders (private cars and motor bikes) sneaking in.
In this way, we can almost guaranteed bus users getting to their destination on time. This system is now used in Perth, WA and I observe the buses reaching a certain destination have 1 or 2 minutes
difference at most. More people are encouraged to use the public transport system these days rather than using car their own transport.

No wonder you were trained as an accountant, Mr. Netto.

All you can see is the Credit column.

Well, the oil price still above US$ 100 per barrel. Even lots of people lobby Obama administration open up USA oil reserved to reduce oil price to help “speed up economy recovery”, Obama are quite good on Taichi-ing and avoid the move. When USA silently play along with the peak oil theme, oil subsidies policies in 3rd world country like Malaysia can’t stay forever. It is USA own way of curbing traffic growth. Pakatan Rakyat government must rethink this unsustainable policies and enact new policies to curb the automobile crave. Beside improving public transport, perhaps sometime in future, petrol station… Read more »

Well, for the first time (after donkey years), I tried using public transport (bus) last week from Bayan Lepas area to down town (Beach Street), to be fair, the public transport improves (new buses with air-con and frequencies) quite a lot compare to 5~10 years ago. But, the traffic was horrible. It took me 80 mins to get to my destination where if I drive, it will take about 25~30 mins max even with traffic (not heavy). From my personal observation on the ground, its a “chicken or egg” situation. One cannot afford to take or rely on public transport… Read more »

The big (ones) are not going to give up their golden geese – cars, petrol and highways – willingly. Many households are in a pitiable condition, running 3 to 4 cars with all the attendant worries. The simple solution – Bus Rapid Transit – has been proven in a number of countries. Once dedicated lanes for it are enforced, the condrum is broken. Other factors then matter less, e.g. whether the buses are in great condition, whether they have air-con. or fan, etc. Public expenditure will also plummet.

A leader who didn’t know whether he want a tunnel, bridges, a public bus transport system , monorails, LRT or tram, and tell you private car is more reliable. You sincerely believe that he is a good leader with visions? That he is not a self serving leader? Let see whether he got the guts to let the so called transportation master plan see the light of the day or not.

A good leader is someone who will assess whether there is a need for a tunnel, bridges, public bus transport, monorail, LRT or tram or any or all before making any decision to ensure that it does not become a white elephant. Vision without making the proper assessment and decision will not make a good leader either.

Aiyah Anil don’t you know two lanes must be exclusively reserved fo the VVIPs, one for Fat Mama self-claimed first lady and (political) eunuch partner and the other for the Southern M… No worries lah, Penang traffic is not fully exploited. Have a look at Taiwan with the same population of Malaysia, they have a transport system running efficiently or for the matter, look at our neighbor, are’nt their traffic running smoothly. We got a PR govt now, things will be different, Anil wake up lah!

With the level of carbon monoxide rising to Komtar high, I am sure LGE will have to wear a face mask at work! Imagine breathing tons of toxic air in one’s life in Penang Island, the private hospitals, medical suppliers and insurance companies will be laughing all the way to the nearest Butterworth banks.
Is that the way to go global cosmopolitan city?
One solution is to grow more green trees and greening every available space to absorb the pollution in the air.
Have you heard of urban forestry project? See here:
http://download.edinburgh.gov.uk/Greeningthecity.pdf

When Penang achieves parking lot status, we’ll just have to walk on top of the cars.

The return of the pavement.

On the other hand, you can see that there are more lanes going from Penang to the mainland. There is much potential in developing the mainland as well!!! Is the glass half full or half empty??