The PBA’s decision to reduce the proposed tariff hike for the construction sector by 35 per cent sends a wrong signal. It was only recently that it was announced that water tarrifs would be hiked to encourage conservation and avoid rationing in the light of declining water levels at dams.

Instead of the original proposed tariff of RM3 per 1,000 litres (up from the present RM1.52) for the construction sector, the rebate would revise the new tariff down to RM1.95.

On 1 September 2013, the water conservation surcharge for domestic consumers was hiked from 24 sen per 1000 litres to 48 sen for consumption above 35000 litres per month. Back then, the PBA said the subsidy for domestic users was unsustainable and the hike was needed to promote conservation.

In April this year, in the light of the then dry spell, further tariff hikes were proposed as follows: 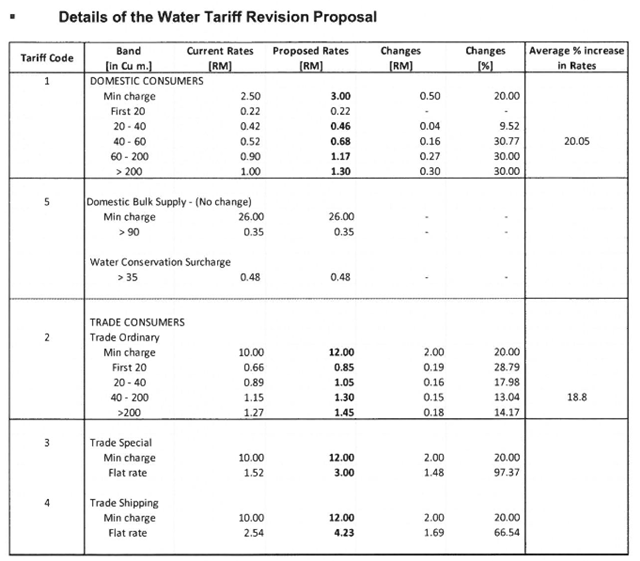 So how can the PBA afford to subsidise the construction sector now by reducing the RM3.00 proposed to RM1.95? Aren’t the big property developers and contractors making enough money from soaring property prices? Don’t we have enough construction in Penang Island as it is? Isn’t the place so overbuilt already?

Aren’t we supposed to be encouraging water conservation in view of anticipated future supply constraints and with increased uncertainty following the onset of climate change?

Or does the need to conserve water only apply to the ordinary person on the street?

The rebate should be scrapped and the original proposed increase should stand.

Tuesday (16/9/2014), PENANG: Perbadanan Bekalan Air Pulau Pinang (PBAPP) will offer a 35% rebate off its proposed new tariffs only for the construction/renovation sector.

This follows the announcement by Penang Chief Minister Y.A.B. Tuan Lim Guan Eng, on 10 September 2014, that this special rebate was to support a conducive business environment for investments, property development and economic progress in the State of Penang.

Y.A.B. Tuan Lim said: “On 30th April this year, PBAPP submitted a water tariff review proposal to SPAN. Under this proposal, the flat rate tariff for ‘Workshed Supply – Building Construction/Renovation’ was to be reviewed from RM1.52 per 1,000 liters to RM3.00 per 1,000 liters.

Y.A.B. Tuan Lim noted that the Construction Industry Development Board (CIDB) had approved 160 projects in Penang for the first half of 2014. Amongst these, 25 are government projects and 135 are private projects. In terms of ringgit value, the total projected investment is RM1.985 billion.

“We have to ensure that Penang continues to attract profitable and sustainable development projects to keep our economy vibrant. A vibrant economy benefits the people in Penang.

“As such, we agreed to offer this 35% rebate for water supply to construction sites, although it will reduce PBAPP’s revenue,” Y.A.B. Tuan Lim added.

PBAPP will implement this 35% rebate until further instructed.

CAT LORD ALMIGHTY. What else are you giving away? Water is a public utility. You know, public means the people of Penang? Water is the single most important asset belonging to the people. If you give away discounts to the construction people, why don’t you give discount to me an old lady living from hand to mouth trying to make ends meet? I need the water to keep alive. Which is more important — water for business use or water for my basic need to keep alive? Why don’t you give water discount to the hawkers? How about giving it… Read more »

“Niamah” recalls my days working in a KL international ad agency. A hotshot lady copywriter often shot this “Niamah C.H.” when great scams (idea sketches on paper) didn’t get through or somebody plagiarised her ideas. Soon, it became our studio favourite repartee.
Later on Patrick T used it as his radio parting shots but didn’t copyright this “Niamah” so we now have a field day shooting it as & when appropriate.
“Niamah C.H.”
Anil, “Niamah” means your mother.

Yes, we certainly have a powerful developers lobby here in Penang. It seems to me ‘someone’ is bending over backwards to accommodate foreign international developer companies, often hiding behind a local small time company who do their dirty work in clearing the land of inconveniences, like Malaysian citizens. Is it my imagination or are the acres of land coming under misguided development getting bigger and bigger… Pepper Estate 28 acres….Batu Ferringhi 33 acres ..?

I felt the same way when I read about this rebate. Instead of giving rebates to the rakyat who have to pay all sorts of surcharges they want to give big time developers a rebate. Then when the PAS perwakilan points this out to them in the muktamar, they jump up and down accusing and labelling ppl who speak up enemies. Time to send message to them in the next GE. No more 2/3 majority. We need to tell them and tell them fast that it is time for you to change and behave otherwise you will be out. The… Read more »

These CAT arrogance don’t have a human heart & soul for Penangites. Preach wonderful UBAH but commit the unsavoury misdeeds, quantified & justified by their own double standard & twisted reasoning. If one wants to develop a state, which is more important: the people’s need or the corporations maxi-profiteering? One has limited means, the other has vast resources. It’s no use developing in the name of higher investment when the people have to tighten belts so that businesses continue to enjoy subsidies. After the fact of profiteering by those in the construction industry, the people still cannot afford a home.… Read more »

What is the fuddled message of Greener Cleaner Penang? Q: Do we have enough green hills, trees, topsoil & untouched forest to naturally collect sufficient rainwater channelled for our consumption, much less to think about subsidising industries? Q: Is construction industry an eco-saviour of Greener Penang to warrant water subsidising? Q: Why subsidise a booming industry when its revenue from surreal property pricing is beyond deserving any subsidy at all? Q: Why bow down to Penang Master Builders & Dealers Association when the construction business is so frenzied like American West gold rush? Q: Why the need to subsidise water… Read more »

What nonsense is the Penang govt up too. Domestic Consumers are hit in the stomach with penalty in the name of water conservation but construction is given rebate. Look at the prices of buildings n houses in Penang. The builders are making tans of money. Why safeguard their interest..?????? Domestic consumers shouldn’t be imposed penalty…

Patrick,
All Politician are same breed. Different only in ideology but the final aim is $$$.
rajraman. I scratch you back and you scratch me with $$$.

Tasting MercS300Lansi lifestyle can UBAH things in Penang.
The future of bodoh-bodoh will remain static or turn downward spiral.
The pandai-pandai will migrate to or thrive in Penang Island built for the rich, famous & subsidised (for more profiteering).

Helvin…..How do you compare when there’s no tariff rate mention to justify your comment ” the contruction rate is highest amongst all rates…the lowest is the domestic rates second is the trade rates and highest are construction tariff rates”. The PBAPP should not give the rebate because this will not encourage water conservation among the sector. The construction sector are also in business and they should built in the cost to their projects. What percentage of the water bill form the total project cost and the percentage of their savings from the rebate? Very minimal?

seng hai tan ……i guess ur wrong….the construction tatiff rate is the highest amongst all the rates…the lowest is the domestic rates second is the trade rates and highest are construction tariff rates…this is if ur talking bout penang water rates which i believe you are

Did I not said many times, … deceit, twist and turn is the hallmark of the current meow meow govt. And are we not right that this is a pro developer govt not for the rakyat govt. Now this is what we really call “ being abuse“`

You ask for it. Be happy of what you asked. No brainer like you are contributing to the deterioration of two parties system in Malaysia.

In Penang, what builders ask, builders get. Do you know that construction tarif rate is lower than domestic and trade consumers rates?