Update (3.30pm, 11 July): The detainees will be released on police bail. Little Edwina is delighted to be going home today, says Jehan. She is pictured here with Zela, a volunteer in the defence team.

Update (3.00pm, 11 July): A defence lawyer Jehan Bakar tweets to say the atmosphere in the courtroom is very casual now as the accused continue to wait. The detainees will finally be released on police bail.

Update (1.35pm, 11 July): Three more detainees – Muniamah, Revathy and Lattha – are taken to hospital. This is not looking good.

Update (1.15pm, 11 July): The detainees have now been brought into the court room. A group of people are protesting outside court, according to a tweet from Suaram.

Update (1.00pm, 11 July): Three detainees carry another detainee out of the lock-up area after she fainted. She has been sent to hospital.

The rest are being moved to Magistrates Court 1. One more detainee suffering from diabetes needs dressing for his wound. Medical personnel tend to him.

Two more detainees are feeling unwell and Dr Jeyakumar examines them. After much protest, the women detainees are taken to a more comfortable place.

Update (noon, 11 July): Suaram reports that lawers were told that police are waiting for a decision from the AG as the Kuantan DPP cannot decide. Meanwhile, Dr Jeyakumar Devaraj and a colleague are heading to meet the Pahang CPO to demand the release of the residents.

Update (11.30am, 11 July): 12 lawyers, four chambering lawyers and four attachment students are now on hand to assist the residents in court.

Update (10.30am, 11 July): The group could be charged under sec 90 of the Police Act for shouting indecencies. But the group maintains they only shouted “Hidup Rakyat!” A team of eight lawyers from the Kuantan Legal Aid Centre and other volunteers lawyers have come out to assist the residents’ defence.

Update (midnight, 10 July): The group is being remanded overnight and expected to be produced in the Kuantan Court tomorrow. (So much for transformasi!) About half a dozen lawyers are expected to be on the defence team.

Thirty one people from Cameron Highlands were detained outside the Pahang Mentri Besar’s office, where they had turned up to insist on an appointment. 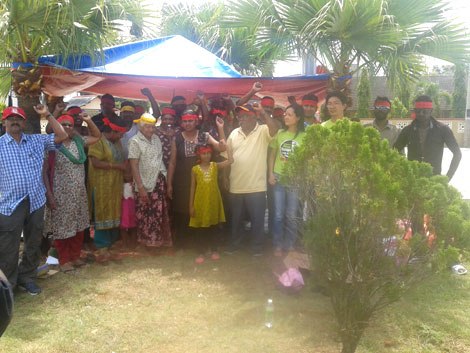 They refused to leave when asked to disperse.

The group is now being held at the Kuantan District Police Headquarters. The 31 comprises 13 men, 12 women and six children.

Their problems range from lack of even temporary titles to the land they have been toiling on, to worries over landslides to issues related to applications for stalls.

PSM sources claimed the Pahang MB had said he would visit the villagers in Cameron Highlands to try and resolve their problem. But after two months, the residents had not succeeded in getting an appointment with him.

So they decided to go to the MB and insist on an appointment.

Meanwhile Bukit Jalil estate workers are asking for four acres for 41 families after staying at the estate for four generation. Prime Minister Najib agreed to meet three of their representatives today.

At the meeting, the PM said he needed more time to study the issue. The workers said they hope he had the political will to resolve the issue.

Kuantan police should be commended for not using physical violence against peaceful demonstrators.

(Unlike the shameful behaviour shown by the authorities at Bersih 3.0)

I am Chinese and I say yes to hudud.
Only BN people are afraid.
(And) who c4 others and make dirty videos.

Only those like namaapa will regret that they have stayed healthy enough to answer to a long list of charges on corruptions, power abuses and sabotaging the nation.

Transformasi – anything to avoid the dreaded R-word reformasi.

How dare the slaves confront their masters like this!

Anyway, CHANGE is even more scary CHANGE TO PAS HUDUD ~

Brownie
Reply to  Andrew I

Like using the ‘haram’ money from San Miguel to (allegedly) convert Esso to Petron?

PAS hudud for Muslims only!

UMNO/sycophants hudud, for all Malaysians? Think carefully folks, do not take the chance!

Flattery won’t get you anywhere, Gherks. All we need is to stop the big time corruption by voting PR.

Let it be clear that from UMNO Kepala Batas in the north to Johore UMNO in the South, UMNO wants hudud for all (muslim and non muslim) Malay, Indian, Chinese, Kadazan and so on. But PAS hudud is only for Muslim and will not be implemented because the PR (DAP, PKR & PAS) have consensuosly said NO. . Its very dangerous that Chinese, Indian, Malay, Kadazan will be subject to hudud and their sycophants cannot say no because UMNO is the tai kor..Its dangerous and clear that that Nacheat wants hudud for ALL thats why they entice PAS. But PAS… Read more »

The police have done the right thing. No complaint at all. The lawlessness mindset of pakatan fanboys must change instead.

Why don’t you tell that to your perkasa brethren?

Aiyo, Gerakan, the Kuantan Police no good lah, so unlike their Penang counterpart who usually paved the way for those Perkasa and their rubble to demonstrate and block roads and bridges not just Komtar.

Funny this kind of hospitality is not shown to our local demon-strators who show up to create some bother for LGE.

Ambiga and now these poor Indians!

Poor folks! How badly marginalized they are and it shows by the actions of those in power!

These simple villagers waited two long months after the promise of some resolution, each passing day weighed down by the problem. Then they travel to see the Menteri Besar and was asked to disperse. Don’t we have anyone at the MB’s Office to see them at all? What kind of problem-solving is this? More like problem complicating. Do we have problem-complication courses in our local universities? I know we have conflict resolution courses, but how about getting these great people to conduct courses on conflict complication. We can develop these models and send them to the United Nations to brighten… Read more »

If you ask me, even the poorest Indians know UMNO is desperate and they are squeezing as much as they can by going directly to UMNO top leaders – forget the middle man MIC or even anyone low ranking in UMNO..

Time for Ah Soon to apologize.

Interesting comment from AhmadSobri150: How to vote for PR to replace BN. All they are good for is blame the previous government instead of solving the problem. If Penang DAP Lim Guan Eng is showing what they will do if they win the election when they can’t even solve the present Penang predicament, I am afraid we are going to the dogs if the win the next election. Combining DAP and PAS, we are in for a very, very big big disaster. PR morons want to portray themselves as educated and intelligent and if they can’t see the big mess… Read more »

UMNO Johor wants hudud for all regardless of race and religion, whereas PAS hudud is only for Muslims.

Don’t take chances with UMNO/sycophants as far as hudud is concern?

Anyway, GELAKAN is so useless in today’s political arena, MCA will ensure its total demise and soon!

Who is BN boss now ??? Only words from 1Malaysia PM Najib count. 1Malaysia PM Najib already said “hudud is unsuitable for Malaysia environment”. Loud and clear enough for everyone including local people, and international investors.

PAS is equal boss in Pakatan and Pakatan boss never hide its intention for PAS hudud.

Can you stop making harmful proposal of CHANGE (i.e. change to hudud) to all Malaysians and international investors ???

[1]Even though it is God’s law, Datuk Seri Najib Tun Razak said hudud is not suitable to be implemented because the government has to be realistic about the country current environment.

You and CSL are just the same! Curry favouring masters! Apple polishers they say, or bootlickers? You all are so unashamed to curry favour! If Najib cannot control its own UMNO, allegedly in turmoil, and fear of being sabotaged by its own 1million members who are said will vote opposition, just how can they convince the country? And if Najib cannot control UMNO, can GELAKAN? GELAKAN will meet its demise in the hands of MCA? Acts of betrayals will be paid with counter betrayals of the bigger kinds when one is down and GELAKAN is facing just that? GELAKAN so… Read more »

In BN we are free to allow people voice their opinions. You can see the DAP ways[1][2].

Geelakan, how ignorant canyou be

Kepala Batas Wanita Umno to back hudud
11:30AM Jul 11, 2012 | 7
The wing will table a motion at its divisional meeting to support the implementation of hudud law in the country.

And GELAKAN will support it, lock stock and barrel?

Can we hear from the “I will be more assertive, Penang BN chairman, from the now politically impotent GELAKAN?

Surely, the time is now MCA to finish off GELAKAN! Does GELAKAN have a support base actually? Now that Penangnites had rewarded it with a big goose egg?

Najib only says nice things, but (allegedly) sub-contract all the dirty works to his kuncu. We all know this.

Afterall, we have seen that he never censure Nazri for all the rubbish talks.

Geelakan,
You betul betul bodoh. Nacheap said that in 2011. UMNO people said it now and he keep quiet. History is cheap because he … can change colour anytime. He said no ISA but use assembly bill which is even worse. Tell him to say it now otherwise he and you are just bohong cakap.

Do you want our 1Malaysia PM Najib to repeat his stand each week ???

You think our 1Malaysia PM Najib so free ah ???

How many times do you want PR (DAP, PAS & PR) to repeatly say that they consensouly say NO NO NO to hudud.

He will NOT say no hudud when UMNO say hudud for all Malaysian.

Are you so bodoh not to be able to see that

dei, this is in the land of MB vulgarity. Not penang-lah

Wow this is a 1Malaysia MB
Come and get an appointment and you get arrested.
Who dare to see the 1Malaysia PM.

Halo MIC, apa bust. It never surprise me how far BN is willing to go to … the Indians…