Some 1,000 students have protested at the persistent water shortages at the Universiti Malaysia Sabah campus in Labuan. 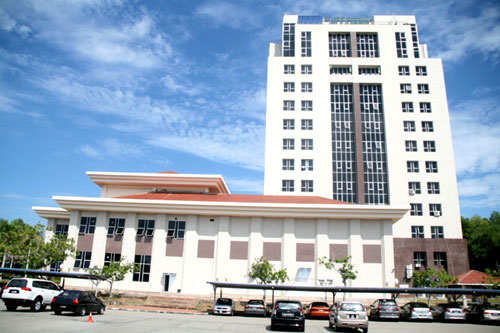 It was the first picket in the history of Labuan, reports Bernama, which said the water problems were due to a “dry spell”.

Armed with placards and posters, they gathered at the university campus about 14km from Labuan town as early as 9am, and demanded water – as the police were on standby.

During the noisy picket, lectures were temporarily halted.

Speaking to Bernama, UMSKAL student representatives council vice-president Heryanto Hasanudin said they had submitted a memorandum to the university’s student affairs department before the picket.

According to the memorandum, the students want Higher Education Minister Datuk Seri Khalid Nordin to visit UMSKAL and check the situation first-hand; a consistent and clean water supply and temporary closure of the university until the water woes are solved.

Did the management run out of fund to pay the water bill? How about in town, water shortage also?

People in power considered these students as less than human. Student power. way to go.

What were the staff doing while this was going on? I think I’d want to change my timetable, maybe organise some field trips / tutorial / lab sessions. I’d go outside building condensation traps. Engineers / scientists / accountants could be doing the design / feasibility studies for different kinds of potable water generation. Marketing / arts / c&c students could be coming up with new ideas for selling recycled moisture to each other. After all, if it’s good enough for the Dalai Lama and Singapore – right? I feel sorry for the students. If any of them were under… Read more »

Don’t know the logic of locating a U in Labuan without proper planning. The town has always been beleaguered by water shortages especially during holidays and major ship docking activities. When hotels go dry, even I went to the Airport for water! All households usually install extra 2 or 3 water tanks as reserve. The U management should install a larger water tank/reservoir if they are serious about housing and educating more than 1000 undergraduates. Ironically, Labuan is also home to a big Over-shore Supply Base which sell million of gallons of water to off-shores tankers and bunkers.

Reformasi in Labuan starts in the University and with an impressive 1,000! Good to note that! Sabah is really ripe for the taking! Only the opposition needs to work with each other, and the most frightening thing is the frogs! The PKR and PRM should consider bringing in new faces, or even fresh graduates! The votes are there for the taking! Those old warlords are not going to make a difference! Sad to note that peaceful protest by undergrads for water warrants the attention of the police, whereas PERKASA goes round spewing anti ethnic slogans and bad faiths without actions… Read more »