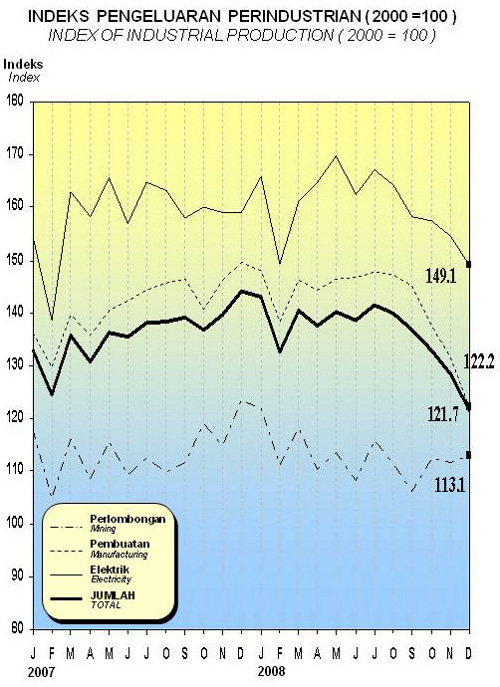 There are three components to our Industrial Production Index — manufacturing, mining and electricity. Manufacturing (see dotted line), the most crucial, appears to be in free fall by December.

Manufacturing accounts for 71 per cent of the Index and contributes 28 per cent of GDP. It also employs 20 per cent of workers. And then there’s the ‘multiplier effect’ on the rest of the economy.

While manufacturing plummets, the Consumer Price Index for food remains high – even though commodity prices have slumped.

Although the overall CPI for December year-on-year (yoy) has eased to 4.4 per cent from 8.5 per cent last July, the food component remains at 10.4 per cent, slightly down 12.3 per cent yoy last September.

Thus even though the economy is slowing sharply and jobs are being lost or trimmed, the lower income group are still hurting the most as a much larger proportion of their budgets are spent on food.

Look no further than the price of rice. International rice prices have dropped by more than 50 per cent (export price for Thai A1 Super, the cheapest, has dropped from a high of US$772/tonne in May 2008 to US$310/tonne in December 2008 – lower than the Dec 2007 price). But have local retail prices, apart from subsidised Bernas rice, dropped correspondingly?

Several large banks have already been nationalised or bailed out with massive public injections of capital in the US, UK, Ireland and elsewhere in Europe, with more expected to come out of the banking woodwork soon with their begging bowls to their governments. Ireland was one of the first countries to give an assurance to their banks’ depositers and guarantee all deposits in Irish banks up to 100%. The UK government has guranteed up to £50k for deposits with UK banks and other European governments too have offered various levels of protection to their banks’ depositers. Iceland’s banks as we… Read more »

dear anil Can the data be wrong?? and leaning towards false reporting?? Why? our beloved finance minister and his second finance minister ( I do not know which other country has more than one finance minister and the finance prime minister job must be also simple as it is part time) made press statements that our Malaysian economy is not affected by the global economic meltdown after our financial innoculation of RM7 billion (+ RM5B for mavcap). Coming soon is the booster dose to be tabled in parliament. I cannot remember if the first stimulus was passed in parliament? as… Read more »

The signs were there YEARS ago! The US debt level was unsustainable and if they crashed, we would go with them. Singapore was scrambling like crazy to batten down and hoard suppliers for the approaching storm. Our guys in government on the other hand are economically illiterate and won’t know a crisis until it bit them in the ….

What is the health of your local banking system? Are the Balance Sheets of your banks sufficiently asset-backed to be strong and resilient enough to weather the prevailing world economic storm? Or are they, like many of banks all over the world, over-filled with gaping big holes from too much valueless and pointlessly risky financial derivative drivel-based instruments on top of the grimey sub-prime liabilities? Or is Bank Negara, unlike Central Banks everywhere who are now wringing their hands in hopelessness and running around like headless chickens trying to save their economies from falling around their recklessly negligent heads and… Read more »

This situation was easily foreseeable two or three months ago, yet our wise senior leaders chose to sing the mantra “Our economy is strong, it is not affected by the subprime crisis in the West, and we will not go into recession”. It was the height of irresponsibility. The smart thing would have been a) Prepare the nation psychologically for the coming crisis. b) Put in place measures which quickly pump cash into the local economy. The so-called 1st stimulus package RM 7 Billion is still thin air. Meanwhile our Finance Minister is busy with reinforcing a katakcracy. Anyway, if… Read more »

Sure, as expected. How can Malaysia progress when we stop work at 12.00 noon every Friday, and spend the time in street protest, just like in Penang yesterday.
With companies now having Monday off, we are left with 3.5 days working week!!!

TQ for bringing this up, Anil. How pertinent. Keep it up!

ANIL, THIS IS MALAYSIA BOLEH-LAH. WHEN PRICES GO UP VERY HARD FOR THEM TO COME DOWN. ALL THIS WE MUST SAY A BIG THANK YOU TO THE SLEEPY HEAD WHO INCREASE PETROL PUMP PRICE BY 78 CENTS/LITRE. WHO SUFFERS THE MOST, THE POOR AND THE VERY VERY POOR. WHAT TO DO? MARK MY WORDS, THE DOMESTIC AND COMMSUMER MINISTER CAN TRY AND DO WHATEVER HE WANTS, PRICES WILL REMAIN AND NOT COME DOWN

Whether any price for food or petrol or anything at all are dropping, one thing is for sure…….most of the workers in Penang/Prai(like me) are gonna have to think of a way to survive with a monthly paycheck of less than RM500(or maybe worst RM0).
Most of the factories here are having shut-downs on weekly basis(like 2-3days working day per week)…so how do we change our lifestyle?

Let us be honest with the economy. The country is going to face gloomy days soon. If money is not wisely spent our ringgit soon will become “banana money”. The mulitiplier effect to the economy is going to affect the poor most.

What alarm bells, Anil? Who is ringing the alarm bells? Hey, they said we are ok and there isn’t going to be any recession, okay? Malaysia will not be affected, they have repeatedly said it! So, please do not alarm the public.

The bell tolls Ringing every time BN government so slow Getting out from its store When costs go up BN agrees saying to stay alive When costs go down So slow walking the talk Look at TNB Increased 30% last year In March only going down 2.5% TNB thinks we are fools And BN government says “I give you cheaper rate So now vote for me” The FD deposits in banks Someone reported it goes down to 2.5% from 3.0% In time of economic setbacks those living on FD suffers And BN so slow walking the talk The sleeping beauty… Read more »