Almost a thousand people in Prai are braving a downpour to make their feelings known against proposed amendments to the Employment Act. The protest is part of a nationwide MTUC picket.

Passing motorists, especially factory and express bus drivers and lorries heading to the Prai Industrial Estate are honking in support as they pass by, each time raising huge cheers from the crowd, many of them with brollies up. Protesters are chanting, “Don’t amend labour laws”, “Jangan tindas pekerja“, and “hancur BN“. The continuous honking of passing motorists is deafening but no one is complaining.

In 2007, about a thousand people turned up in Prai as part of a nationwide MTUC picket to call for a minimum wage. It was the first step in the build-up to the “perfect storm” that struck during the March 2008 general election. 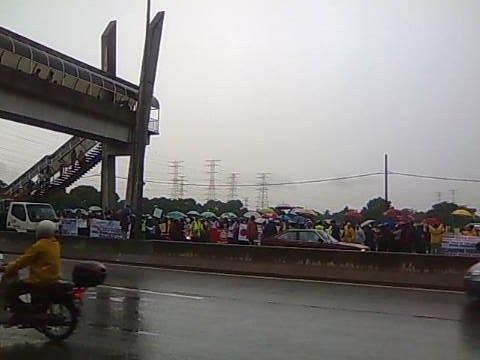 Among the crowd are several activists from the Penang Forum, including Dato Dr Toh Kin Woon.

Many plain clothes police around, some apparently with video cameras. A few uniformed police guiding traffic while others observing.

Protests are believed to be taking place in 17 locations nationwide.

Over in KL, Jerit reports that another 500 people have turned up at a gathering in Jalan Raja Laut in KL.

NSurendrann in PJ meanwhile reports that the crowd is growing at the MTUC picket along Jalan Barat.

In Ipoh, Sinar Online says that 200 people are picketing in front of the MTUC office.

Have a looka at the photos of the Shah Alam demonstration on the Liang Lahad blog.

Workers are worried that the amendments to the Employment Act would dramatically alter employer-employee relationship in situations where outsourced workers supplied by ‘contractors of labour’ are used. The amendments would regard the contractor rather than the factory owner as the employer. In this way, factory owners would be able to wash their hands off their traditional responsibility to the workers, and the workers’ right to unionise would be undermined.

So far, 115 civil society groups from across the region have endorsed a memorandum opposing the amendments.

Those who have worked for American businesses know that they squeeze the maximum out of you while paying the minimum. They add to the insult by keeping up the double-talk on caring for you, career opportunities, motivation, companiy goals, etc. This culture has spread due to globlisation. Initially, ordinary Americans and Canadians thought globalisation would benefit them, but now – too late – they have found out otherwise. Many Americans and Europeans are now working as “interns” – for no pay – in order to keep their skills relevant. At least some Westerners have woken up. In Bolehland, it will… Read more »

Labouring Human Minister Subra – where are you if you are prihatin ?

Minimum Wage tak jadi then GST on the way, how to survive with barang naik ?

How to SURVIVE encompasses a wider sphere of living in acceptable existence. With the reversal of PPSMI, the Moo-hiddens are making cow-hays while the political sun shines for political mileage of convenience at the disadvantages of our future kids.
I wonder how our future kids will ‘moo’ in international interactions and benefit from skills acquirement and development beyond just chewing local grass… made of political nonsense.
Making education works is one thing, selling the future/souls of our kids to the cow sheds is another (… of Barang Naiki).

If BN continues with such ‘rakyat diabaikan’ attitude, we could see NGOs like PAGE and MTUC rallying their members not to vote for BN!

This is the transformasi that BN is inflicting on itself as rakyat are fed up with those wastage per AG report and the constant denial BN despite escalating national debt.

By right, a contractual employment, contract work or ‘permanent’ is a mutual, civilized agreement between an employee and employer for a common goal of productivity. By adding in between an ‘entity’ or middlemen in such a time honored practice, is tantamount to legitimate cutting away any legal rights of a worker in times of disputes. It also treat workers as bargain chips or cheapo commodity for the wheeling and dealing behind the laws of decencies of employment. It smells of another ‘Monopolistic Kang Tau’ for Barang Naiki cronies to negotiate (in pretense for workers’ rights) but purely for easy (no… Read more »

Well done Penangnites, protest and rally we should, but for a good cause, and certainly your protest today made Malaysians proud! And the shout of “Hancur BN” is very relevant to the political climate today. The protest which took place recently where “road thugs” were used made Penang and Malaysia ashamed and embarassed beyond imagination, and not forgetting those who vandalize in the name of politics! Millions in business opportunities were lost, and just look at those poor folks who suffered during those rowdy protests. Ordinary folks suffer when rowdy protests such as what happened in Penang, and you all… Read more »

Does this UMNO BN govt care. MIC, MCA & Gerakan with the other weaklings such as PPP, Makal Sakthi etc etc its talk talk talk and can do nothing. Just like the PPSMI, Lynas Mudyidin and Najib will put the final nail into it. Today just went to the market, eggs up by 5c, lala previously RM6 per kilo now cost RM13 per kilo, chicken from RM6.00 to RM8,50 per kilo, the lousiest fish around will cost you RM5.00 per catie or RM8+ per kilo. If UMNO and Najib wins again at next GE, well well don`t say that you… Read more »

when you buy milk powder or anything now, don’t just look at the price.
i thought i got good deal buying a branded (cannot specify here as no ad in Anil’s blog) for RM34.99. When I got home i realized the packet is actually only 1.8kg not the usual 2kg !
so when barang naik the suppliers always cut corners and consumers kena “cheated”.

Tuakee is right.
Penang CAP made a lot of noise but they missed out simple things like this that cheat consumers.
Another example is a well-known branded toothpaste that bundled a ‘free cartoon mug’ for every twin pack, but the cost of the ‘free stuff’ is actually ‘bundled’ into the selling price! So you are actually paying for the free stuff that you do not need.
Also be careful when you shop at this hypermarket as you could pay higher than the price tag indicted on the shelf, only to be discovered when you reach home.