Penang Pakatan women yesterday issued the following statement in honour of the working women and men in the state. 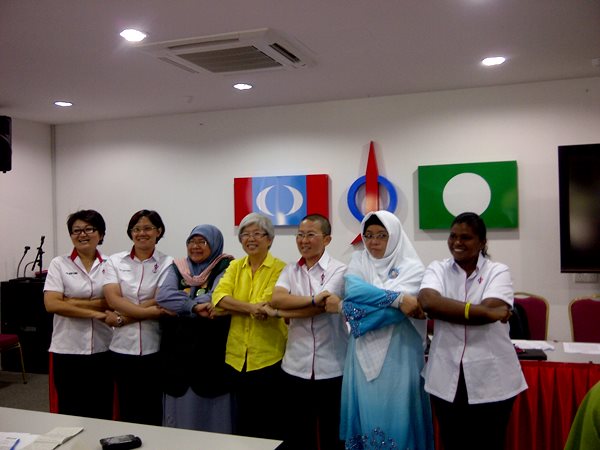 On this eve of International Labour Day, 1 May 2013, and in this intense run-up to GE13 Polling Day, we the Pakatan Rakyat State and Parliamentary candidates in Penang pledge to uphold the rights and wellbeing of all working women and men in the state. At 80.9 per cent for men and 57.5 per cent for women in 2011, the participation rate of the Penang citizenry in the labour force is among the highest in the country. Indeed, Penang’s women lead in chalking up the highest female labour force participation rate in the country, almost 10 percentage points above the national average of 47.9 per cent. Penang women have done well indeed!

For their invaluable and indispensable contributions to keeping up the bustling pace of development in Penang, all our working women and men have a rightful claim to fair wages, job security, quality and affordable housing, health care, education and public amenities, and the right to organise. The GE13 Manifesto of the Penang Pakatan Rakyat has spelt out how the State Government will fulfil these needs to guarantee a “Cleaner, Greener, Safer, Healthier Penang” for us all. The Pakatan Rakyat’s manifesto for women, Agenda Wanita Malaysia, similarly reflects Pakatan’s commitment to respect for women and gender justice across different areas – including education, health, quality of life, economic participation and opportunities, social wellbeing and political democratisation.

Today, while we celebrate and record our appreciation to every member of the labour force in Penang, we also take cognisance of the gender gap that remains – most tellingly in the 23.4 percentage point difference between the male and female labour force participation rates (LFPR). Recalling that women now make up more than 60 per cent of students enrolled in our universities, this amounts to a loss of valuable human resources. It has also been noted that female LFPR drops sharply once women reach childbearing age – reflecting that gender roles still require that women give priority to their homes and families over their own careers and personal achievements.

Chiselling away at the male-dominated structures and values that place reproductive roles and responsibilities primarily on the shoulders of women is going to be an onerous task for the long haul. In the meantime, support systems can – and urgently need to – be put in place so that women and men can play their meaningful roles both in the home and the work place, the private and the public domains. The lack of quality, dependable, accessible
and affordable childcare has been identified as a major barrier to women remaining on the workforce. Childcare is not the only care responsibility that ties women to their homes. Caring for elderly and disabled members of the family similarly prevents them from taking up or continuing with full-time jobs.

Their care responsibilities notwithstanding, many women really cannot afford not to be bringing in an income to support the family. They thus turn to working in the informal sector – as petty traders and hawkers. The State Government initiated the Projek Titian Saksama Rakyat (PTSR) in 2010 to provide microcredit to small entrepreneurs. About 40 per cent of the recipients of the PTSR facilities are women. Similarly, data from both Municipal Councils show that about 30 per cent of hawker licenses are issued to women.

Furthermore, women’s economic contribution through informal work, and especially unpaid care and domestic work, is not captured in labour force or productivity data. Hence, women’s contribution to the economy is grossly underestimated. The United Nations estimates that if unpaid care work is assigned a monetary value it would constitute between 10 and 39 per cent of a country’s Gross Domestic Product (GDP). However, it is generally unrecognised and under-valued by policy-makers and legislators. We are committed to reversing this trend.

Women and men need to enjoy a better work-life balance which will also allow them to be part of the decision-making processes in their work place, community and society. Currently women are still disadvantaged, for example in the political processes in Penang. To redress this, the 13th General Election has seen an increase of Pakatan women candidates in Penang – from four candidates in 2008 to eight candidates today – a 100 per cent increase!

Our responses to these challenges

We recognise that measures to redress gender inequality and discrimination against women must be taken whilst upholding principles of equality, human rights, democracy and good governance. We are therefore committed to work towards the urgent removal of obstacles that hamper women’s full and equal participation in public and private life and the full realisation and enjoyment of their rights as human beings and citizens. We are committed towards achieving substantive equality and social justice for all, and in particular for women, children and youth who form the future of the State and the Nation.

We are proud to declare that in the last five years since 2008, the Pakatan Rakyat State Government has taken steady and increasing steps towards the empowerment of women in Penang. For instance :

1. The State Government has recently approved and is proactively implementing the Penang Childcare Policy and Action Plan (the first at the state level in Malaysia) that presents various modalities for fulfilling the childcare needs of different segments of the workforce. We will work towards effective and speedy roll out of the childcare initiatives so that women do not have to opt out of the workforce due to their childcare responsibilities.

2. It established the Penang Women’s Development Corporation (PWDC) in late 2011, whose programmes include:
a) the progressive institutionalisation of Gender Responsive Budgeting within both Municipal Councils in the State where allocation of resources will be distributed according to the needs of the different groups of people in Penang, especially women and the poor;

b) the drafting of and advocacy for the said Childcare Policy and Action Plan for the State which as mentioned above was adopted by the State Government in March 2013, and for which training on home-based childcare has been conducted for more than 70 lower income women with many more to come;

c) continuing capacity development trainings to strengthen women’s leadership at all levels on gender, leadership, good governance and women’s issues in the local community. Since early 2012, PWDC has reached out to more than 1500 women and even more will be trained if you give us another five years; and

d) the commencement of the formulation of a Gender Policy for the State which will take account of the issues highlighted at “Dialog Wanita” held in the various districts to raise awareness of the different forms of state support that women can access.

Much else can and needs to be done to improve the working environment for women and enhance their position in the work force. They include:

 Introducing more flexible work arrangements and family-friendly policies in the work place;
 Substituting maternal leave with parental leave so that both parents can share in the care of newborns;
 Sensitising more men to share in care responsibilities for children, the elderly and the disabled;
 Providing more and better care centres, including for the elderly and disabled;
 Practising zero tolerance for sexual harassment at the work place;
 Implementing diversity polices that remove the glass ceiling and other barriers to the career advancement of women;
 Increasing the number of women in top management and decision-making positions in both the public and private sectors;
 Practising affirmative action and other temporary special measures to provide women equal opportunities to engage in business ventures; and
 Providing training for women to hone a whole range of business skills, such as product improvement, branding, packaging, marketing and accounts keeping, to support women’s economic empowerment.

We undertake, together with the people, to make these priority items on the agenda of the Pakatan Rakyat Government of Penang for the next five years.

A vote for BN is a vote for Perkasa!

May Day at Segamat is when The National Union of Bank Employees (Nube) is initiating a sustained picket against the BN incumbent Dr S Subramaniam to ensure he is defeated on GE13 as he has failed as HR minister.

Very true, BN under Subramaniam did not curb the inflow of foreign labor (supressing wages for locals) that has caused lots of social problems. Is there any truth that BN cronies got commissions as agents bringing in foreign workers? Also there is much speculation that many foreign workers are granted blue IC to vote for BN?