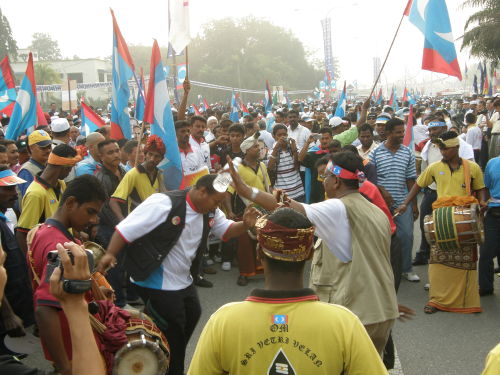 Tense situation?: Drummers thump rhythmically as others jive to the beat during Nomination Day for the  Permatang Pauh by-election last year – Photo by Anil Netto

Here’s another ‘bright’ idea: The Election Commission and the police want to restrict the number of supporters who turn up on nomination day to 5,000 (for each party?). This follows their attempt to ban the “pondok panas” (voter assistance booths) set up by political parties outside the polling centres.

In the first place, how do they plan to ensure that the crowd does not exceed 5,000? What if 5,001 people turn up? Are they going to put up turnstiles outside the nomination centre and issue tickets?

Interesting that they should come up with the 5,000 figure. In recent by-elections, that’s about the largest crowd size the BN could muster. In the Permatang Pauh and Bukit Gantang by-elections, for instance, about 5,000 BN supporters turned up on nomination day, whereas the Pakatan supporters were six to 10 times (or maybe more) that number.

On polling day, casual observation of the respective pondok panas was enough to show who the likely winners were going to be.

Such huge turnouts of Pakatan supporters must have been demoralising for the BN campaigners.

As long as the BN had the larger crowds (in by-elections before March 8), huge crowds were not a problem for the BN, the Election Commission and the police. But now that the tables are turned, we see the authorities trying to ram through new restrictions.

This excerpt from The Star:

Sunday May 3, 2009
Parties have to limit supporters
By G. MANIMARAN

PETALING JAYA: From now on, political parties have to restrict the number of supporters who turn up on nomination day for by-elections to 5,000.

This step will begin with the upcoming Penanti by-election.

The Election Commission and the police decided on the move during a meeting last Thursday.

“The commission and the police request and hope political parties will limit their supporters to not more than 5,000 people,” said commission deputy chairman Datuk Wan Ahmad Wan Omar when contacted by Mstar Online yesterday.

“It is to ensure that the situation does not become tense at nomination centres and for things to run smoothly.”

This EC chairman is even worst than…

Soon, the federal government will say that there won’t be any more election and BN will rule forever since they want to ensure that the situation in our country does not become tense and for things to run smoothly.

If arrogant UMNO/BN don’t start trouble, no one will! As has been (the case in some of the) past elections it’s their unruly and rowdy samsengs/mat rempits that caused problems!

Isn’t it obvious the Ec/SPR and police have (been perceived by some to be) working in their favour? And the rakyat are paying their salary? Watch out and be prepared to pay dearly! We can’t wait for GE-13.

The “ban” is targeted at Pakatan only….!!

Most of the police will be at Pakatan just to keep you guys “SAFE”…!!!

They are “NOW” comming out with ideas for Penanti.
Nothing for the rakyat…!!!

These won’t work in the Internet age
(especially if you are both corrupt and incompetent, unlike the PAP)

The police and EC should just ban by-elections completely since BN is not capable of winning.

Anil, the funny part of all this, as noted by MAFREL, is that EC kept saying they need a law to enforce the ink, they need a law to enforce the spending cap on campaigning, etc. Basically, they have no power, they cannot do anything, right? Now, all of sudden, they decide to cap supporters at 5,000 on nomination day. The solution to avoid these tense face-offs is simply (as is done anywhere else) to run nomination on a full day rather than one hour. But the EC appears to like the face-off, because they won’t do full-day nominations. What… Read more »

can they put someone with a little bit of gray matterto helm the EC. enough of lap… acting for UMNO. if they cant even stand up to earn their salary in decent manner, just resign and dont be a lap… ok.

I think UMNO realize they are being challengend not only by PR but RAKYAT as well and they no longer can win the battle or war. Now we get to see the extend of damage… done to our PDRM, Judiciary, Education and Civil Services. When you have people that don’t have to work hard for their money and position see what we get now. All we gets are some half-… statements and than retractions or reverse because they didn’t think about the whole process thoroughly. Just like Perak issue they might be able to get some support from RAKYAT but… Read more »

cap of 5,000 people? is the EC going to send officers to count heads? what happen if the count reaches 5,001? send the fler away?

this cap is also a denial of civil rights. every citizen is entitled to 1 vote and surely to manifest his or her support to the party he or she has chosen.

there has been no violent incident of note until now whenever election nomination is concerned. the only recent fracas I can remember concerned the UMNO state election in NS where it got to MIC-chair-throwing ala WWF festival.

PR better keep a sharp look out for any suspicious events during polling day. With the abolition of ‘pondok panas’ , (certain quarters) can perform many dirty tricks including vote rigging. Just a thought.

I will still go there. who can stop me. This is Malaysia. my country not Najib or SPR country.

When BeEnded cannot compete and match Pakatan Rakyat, BeEnded will instruct … to impose all sorts of funny and unnecessary obstructions to stop the embarassment. Next on the list will be the crowd at the ceremah? Later on, if BeEnded will to lose too many elections, will BeEnded then limit the numbers of voter from comming out to vote?