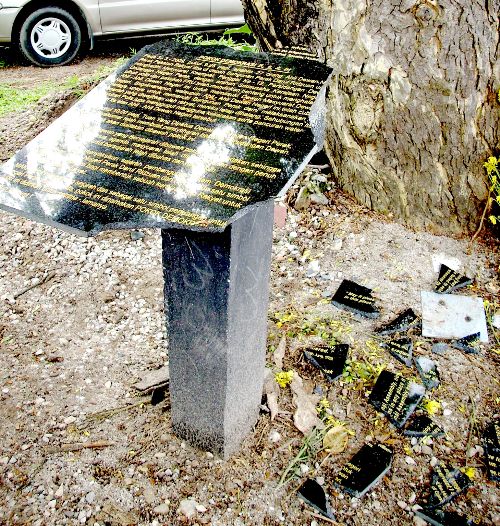 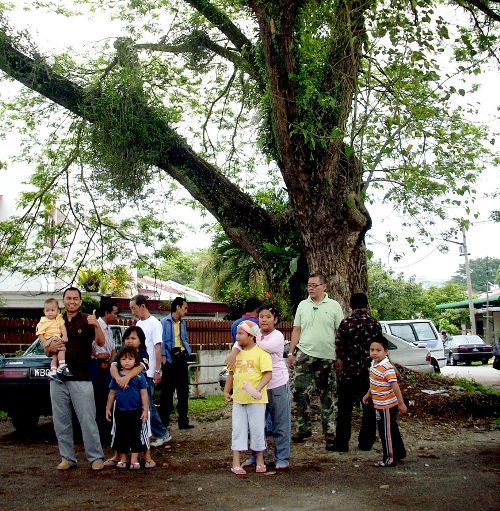 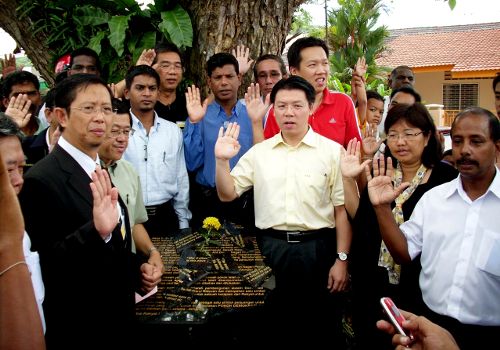 The plaque at the Democracy Tree has been vandalised.

Why are we not surprised? In fact, many of you had predicted that some form of vandalism would occur at this site. And so it came to pass…

In a way, the shattering of the three sides of the plaque is a sad metaphor for the state of our broken democracy.

Thank God that the tree itself is safe – for now.

It was bound to happen.

And it had to happen on Friday the 13th… It probably happened around 1.00am as a resident living by the side of the tree heard dogs barking at that time.

Kula mentioned that “we expected this to happen but not this fast”.

The chronology so far

3 – An historic under-the-tree assembly is held because the assembly members were “locked out” of the house.

13 – The plaque is vandalised – within five days.

These are some of the immediate reactions from the regular stream of visitors who had come to take a photograph with the tree: 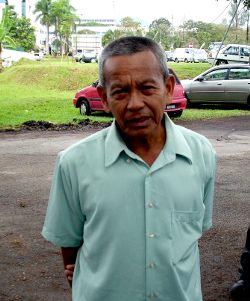 Encik Mashar from Taman Chandan Putri, Bukit Chandan, Kuala Kangsar, whose car was in the workshop, had taken a taxi to come and see the tree. “Memang kesal lah (It is most regrettable),” he said.

An American couple from California, David and his wife, who are now residing in KL and happened to be in Ipoh for the food, said, “We heard about it so we came to look-see.”

Encik Sanizar had returned home from Kota Kinabalu and brought his family along to take a photograph: “Tak baik lah macam ni.”

So what’s next? Nga stated that a new multi-lingual plaque would be erected as the tree is “a symbol of democracy”. They would solicit donations from the public. 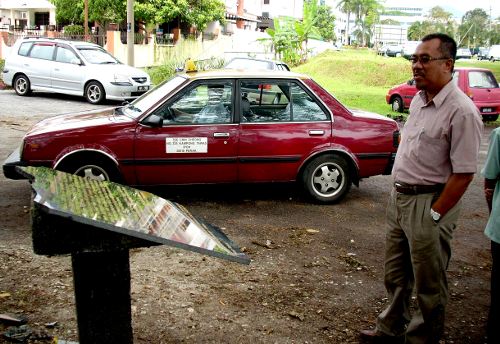 Masha from Bukit Chandan, who arrived in a taxi, gazes at the broken plaque

No need to worry. Perak State Assembly will definitely be dissolved soon. This dastard action of theirs will drive the people of Perak to vote more so for PR. So PR exploit this excellent opportunity to the fullest. It looks like an unseen hand is helping PR all the way. Cheers.

What those vandals did to this symbolic plaque is exactly what the UMNO/BN actually did to Malaysia and her Democratic Constitution from 1969 onwards, particularly under the devastating concrete rule of thumb of a certain infamous doctor Chief Executive.

We live by symbols which are just reflections of the essence of the virtue….

If Change comes soon, we’d really have to tear up to shreds the present secular and religious education mumbo-jumbo. We’ll be investing right, the fruits of which we’ll savor in three decades!

Haha..sometimes people are jealous of the ‘democracy tree’ so they illegally destroy the plaque, I won’t be surprised that one day they might legally cut down the tree one day.

Hey guys,
The plague of democracy has been further vandalised with a splash of tar on it. Check out Kit Siang’s blog
I don’t know what to say about these goons

Sorry to remind you K but the fiasco in Perak is a “chain-events of illegality and immorality” on the part of the UMNO/BN perpetrators. Simple as that! Misguided attempt by PR? What planet are you from? They are only fighting fire with fire and wouldn’t you do the same? You don’t get it do you? Lets say for moment that the entire nation is focused on the economy, what would you get? I put forward the argument that you would get temporary respite from silly politicking but you will still not be able to put food on the tables of… Read more »

UMNO/BN digging deeper into their graves. What has the raintree and plague got to do with the spirit of democracy that’s in us Perakians?

YA.. MORE PLAQUES COMING UP.

A SERIES OF LAW “BREAKING ” RECENTLY IS JUST BECOMES A NORM. DONT GET EXCITED..

IF THE ACTION IS AGAINST DEMOCRACY ,JUSTICE LAGI NO ACTION WILL BE TAKEN .

Has anyone noticed how you can’t keep a good man, woman or a perfect idea down? The more you attack them, the stronger they get in people’s psyche until they turn into those unbreakable ROCKS which we call IDEALS. That is why politicians are afraid of IDEALS and turning ordinary mortals into martyrs. Look what happened when the religious politician zealots got the secular Romans and the ignorant people to kill off Jesus Christ, who IMO, is the perfect human exemplar and therefore the yet to be superseded perfect human IDEAL. So,here’s what I’d like to say to all the… Read more »

No surprise that this happened especially if you have a government that enlist Ah Long and Mat Rempit as their supporters. We nee the higher up to help us in this fight. You probably hear silence again from the BN leaders….. none will condemn because God know why. They are so afraid to lose power that no longer able to do decent human acts.

The software of the true democratic spirit is unvandalisable. It survives longer than the stone of the plague.

All Perakians,
… This shows how desperate (certain) people are.

…when memorial stones has nothing to do with them, yet they break it.

Ha ha, I thought they are all civilized epople but to those tourist they are a bunch of nuisiance
Hidup democracy and hidup reformasi

Pakatan also so stupid…if build something significant make sure it will last for centuries…..so use a better material….can i suggest pakatan to build a large copper ‘bell of democracy’ or ‘electric pillar of democracy’…let (certain) dumb (people) smash it….it will be funny coz trust me they will attempt….i urge all intelligent Malaysians to be patient and brace for the coming changes and shift in powers…with the current economic climate there will be less corrupted $$$$ to go around and keep all the ali baba’s and gang happy….soon there will be more in-fighting as the pie keep shrinking…then … will slowly… Read more »

The vandalised plaque should be preserved for posterity and to teach our children and grandchildren what sore-losers can do and in the process instead of destroying democracy, their very act will strengthen democracy as far as right thinking people are concerned.

imwatchinu :: there is no way one can prevent a plaque from being vandalised if sore-losers abound. Even a cast-iron plaque on a concrete-base can be uprooted.

if PR lost, the tree will be chopped down. 100% gurantee.

K on March 13th, 2009 at 5.39pm commented: Well, what you guys expect then? This tree itself a silly and misguided attempt by PR. Looking for BN point of you it is a challenge for their rule…. Don’t be mistaken, I am not taking sides here. PR should just focus on using legal process to reclaim their rule or wait for the next GE. All these stunts are merely wasting everyone’s time and add to distract the focus on allievating hardship due to recession and steering the economy. Sorry to say, K, it’s your brand of my-stomach-first thinking that makes… Read more »

I think whoever designed the plaque is also at fault. We all know there are many sore losers who would gladly cut down the tree just to spite the opposition so destroying the plaque which is made of very thin piece of granite is very easy. It should have been made of copper or cast iron and mounted on solid cement base. A bit of common sense would have prevailed.

Don’t you see, the plaque now assumes the symbolism that the vandals never for one moment intended.

The broken plaque marks the systemic failure that we see in our political, legal, economic and social system.

Just look at it again. It is an epitomy of the ills that plague Malaysia.

Let us hope Anil goes to Sarawak, the Land of the Hornbills, when the next state election is fought.

I suggest Perakians show BN what is peoples Power. Start a signature campaign getting Perakians to support a memorandum requesting … a snap election. If Perakians can get at least 50+% Perakians signatures to support… It will be faster than waiting for the court decision… This is what I call Peoples Power.

Preserved the vandalised plaque in the Perak Museum for our future and budding historians and also for our younger generation to recall the history of Perak vandalism at its height.Democracy was born via vandalism so I am not surprised with this act.When a new plaque is erected protect it with solid iron grills.If the vandals strike forget the idea and use the money instead to purchase fertilisers for all the rain trees in Ipoh and please make sure you guys get the environment friendly organic fertilisers-some may stink like your poo but its okay its not going to hurt our… Read more »

Pakatan should leave the broken plaque and shattered pieces there to remind the people and tourists what (certain people are) capable of… That’s (their) way of upholding democracy.

Well, what you guys expect then? This tree itself a silly and misguided attempt by PR. Looking for BN point of you it is a challenge for their rule…. Don’t be mistaken, I am not taking sides here.

PR should just focus on using legal process to reclaim their rule or wait for the next GE.

All these stunts are merely wasting everyone’s time and add to distract the focus on allievating hardship due to recession and steering the economy.

The writing is on the wall (plaque) for all to see.
We have in this country a group of people who will go to any extend to make sure that they get their way no matter what. They are willing to ride roughshod over any opposition. They are not interested in democracy nor the rakyat. All they want is power and all that goes with it. Let us hope and pray that they wont go for the tree itself.