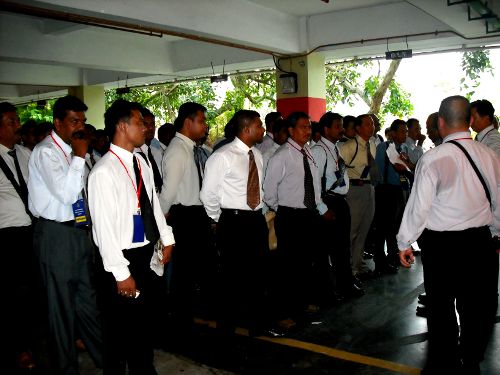 Who were all those mysterious personnel wearing “pegawai” (officer) tags at the Perak State Assembly on that infamous 7 May?

Several photos made available to me show them during a roll-call in the Dewan’s car park at the end of the day, just before 5.00pm.

A couple of hours earlier, men in neck-ties and long-sleeves shirts, some of them donning black jackets and songkoks, sporting the same blue-and-yellow “pegawai” tags, were  seen alongside a couple of uniformed police personnel, inside the Dewan proper.

The State Assembly member for Pokok Assam, Yee Seu Kai, who is a lawyer, says he overheard some of them being called out during the roll-call. “I heard someone being referred to as ‘sergeant’ and there was even a colonel”. 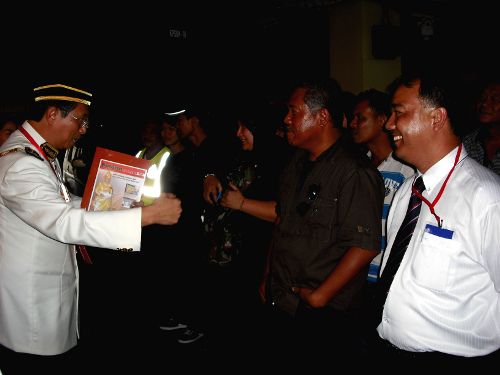 You guys know why they dare to do such things?? Just think about it for a sec…. they have been in power for too long now… and they are so affraid to loose all of these.. power, wealth, and everything else… All these while it sickens me to hear the phrase “KERAJAAN BARISAN NASIONAL”. Guess what they are trying to do???? They are trying to blur the line between government and politics, so that every other straight-lined thinking people out there thinks.. “yea-yea they are the government”.. BUT NO PEOPLE!!!! There is only ONE GOVERNMENT… MALAYSIA!!! and Barisan Nasional, is… Read more »

Look at the photos.

Look at the videos.

4 years later, they will know who their real bosses are.

You need a royal commission of inquiry to find out who are those “pengawai”, this is what the rakyat should ask for and charge those committed contempt of the assembly.

When u cannot win fair in the elections, use all the might and dirty tricks to win at all cost. Everyone says these ‘officers’ are just UMNO … following the master’s bidding (and definitely well rewarded thereafter?)

No lah… all of them were ZOMBIE…. headed by Zambry?… hehehehe

I cannot help BN and UMNO to win the next GE. So sad. The people have made up their mind. I’m sorry.

You heard what your PM said, as if he is inocent about the whole thing in Perak…. One thing I am clear is that PKR is very near to the light at the end of the tunnel, if the citizens has not forgottten the whole incident. What a shame calling this country head of OIC.

I am extremely ashame of our government. Training our young one to disrespect the constitution.
Najib, there is nothing to be proudof. Just field any candidate in Penanti and gauge how much support you have

Who ever they are, they should not be in the Perak state assembly! I always thought we are a democracy where the rule of law prevail. That mean BN do not respect the Sultan as the Perak state assembly is the legislative body of Perak and therefore to physically throw the speaker is disrespecting the Sultan .
However everyone is looking after their own pocket at the end, no more honour and dignity any more.
Why called them Yang Berhormat if you do not respect them?

Colonel? May be the colonel from the Kentucky Fried Chicken….
… summons Najib for explanation on why (these) personnel were misused for BN own political agenda.

No surprise that Mata2 or those in greens are used…

I am staying overseas.
Looking at the video and reading the reports, it was a total utter disgrace to Malaysia’s so called democracy.
The feedback from my foreign friends were basically – Malaysia is now Zimbabwe, or even worse !

The so-called “mysterious officers” with blue and yellow tags are noting more than UMNO/BN henchmen… to do all dirty tactics (for) UMNO and BN illegitimate Perak government. The May 7th infamy in Perak legislature assembly just goes to show that the 1Malayasia as espoused by the PM is the sloganeering to deceive and pull the wool over the eyes of ordinary citizenry of Perakians and malaysians in general. The whole law of the jungle episode or rather bedlam in the Perak state assembly sitting of May 7th is another zenith of hypocrisy in a litany of abuses by the UMNO/BN… Read more »

I think the PR Aduns in Perak failed to use their brain compared to BN members. It is a shame PR unable to outbeat the BN. How did Ganesan came into the assembly hall being not an elected person.

Really sick with UMNO/BN the way they forcibly manned the DEWAN.

[A couple of hours earlier, men in black suits and songkoks, sporting the same blue-and-yellow “pegawai” tags, were seen alongside a couple of uniformed police personnel, inside the Dewan proper.]

Those men in black (should be arrested like Wong chin huat ??) Why can they wear black???

These are SB (Special Branch) or Risik (Intelligence) officers/team. They / BeeEnd have all the tools / weapons they have to win the war, but, they have to remember that they cannot win the battle in 13th GE.

Record down what they did, retribution will take its course. Bless our beloved Malaysia.

They must be a bunch of car park attendents or janitors. Thats wat Zombie and gang wants us to believe.

perhaps thei’l b influenced by influenza a h1n1 +

It was a total desecration of the august house by goons, thugs and gangsters by UMNO/BN.

The whole episode begs the question of who master-minded the whole operations?…

Wrong! You are all wrong. They are from the army…?

They are… robots?
programmed to knock out the enemy?