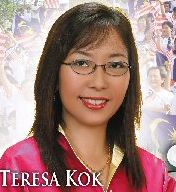 Chief Minister Lim Guan Eng speaking at a press conference described her arrest as a “travesty of justice” and “a mockery of democracy”. There appears to be a massive crackdown to prevent 916 from happening, he observed.

Gerakan leader Teng Hock Nan is leading a candlelight vigil with about 20 Gerakan supporters while human rights activists are also holding a vigil.

A crowd of about 200 people are now gathered at the police station in Penang. Some are milling around, some are singing “Suara Rakyat”.

Teresa was arrested by police when returning to her condominium in KL from a Mooncake Festival reception in her constituency office, according to Lim Kit Siang in his blog. Three police cars with over 10 police personnel stopped her at the condominium entrance and took her away.

This was Teresa’s press statement earlier today in which she wondered if we are heading for a re-run of Operasi Lalang.

let us all stay united and pray for our heroine, Teresa. She didnt do anything wrong, even the leaders of the Mosque said she didn’t intefere with the azan prayer. so why arrest someone when there’s no complains from the mosques itself. If she did something wrong charge her in court. why use ISA? people, pray that God will give her the strength during her detention and we also pray that she will be released soon.

This could be the last attempt from the very powerless GOV. Shame on you Pak Lah, shame on you UMNO, your racist agenda has been well exposed to the public, do you think by your undemocratic media can demolish the power of reformation wanted by Malaysian peoples.

SHAME!SHAME!SHAME!
Can’t we speak the truth anymore? Must we utter words just to please the unept leadership?
Honestly, almost everone on the street knows that the leadership is directionless ! Economy is down! Education standard is dropping by days! Share market is in doldrum! FDI shrinking! Now with such stupid act, I believe FDI would shrink even further!!!
GOD bless those under detention!

Stay at home, stay calm For two weeks, a few troublemakers tried very hard to make the people angry. But most Penang folks remained calm and patient. (Only the BN leaders got angry.) Please continue to help your relatives and friends to remain calm and patient. Don’t listen to or spread rumours. Get the latest updates from internet websites. But do not log on for too long, so that others can have a chance to read the news. Whatever happens, please do not go out on the streets. Don’t give the police any reason to arrest more people. Even if… Read more »

I think Mugabe would be proud of .. how Malaysian government dealt with opposition members. Maybe the Zimbabwe government should sent their law makers to Malaysia for a “Lawat Sambil Belajar”.

We are now officially “upgraded” to be on par with countries like Myanmar, North Korea, Zimbabwe etc.

The arrest of Teresa Kok and the Sin Chew reporter under ISA is a mockery compared to the 3 years suspension of Ahmad Ismail. If this is the kind of government I am getting, I will definitely be rooting for anyone else other than BN. The spirit of BN has long died. It exist only to rubber stamp UMNO’s decisions. This is good timing that UMNO shows its true colors that they don’t care a damn about what the other component parties are thinking and saying. So what are you waiting for Gerakan? MCA? PPP? MIC? Are you going to… Read more »

Dear Malaysians,
The country’s leaders are trying to “create a situation”. Let’s not give them a chance at all! We the people, should not fall for their tricks. The columnist in Utusan Malaysia who maliciously wrote about Theresa Kok, Utusan Malaysia and Ahmad … are free, free and free.
BN-UMNO, you are nearing your expiry date!

SHOCKING ! SHOCKING ! Those are the words that come to mind. the gloves are off! We must now exert enormous pressure on BN and UMNO to stop this crazy series of events unfolding.How long are we going to keep silent!

MCA, Gerakan, SUPP and other East Malaysian Parties. If you cannot stomach the abuse of putting innocent persons without trial under ISA, it is time for you to abandon BN. Let it fall. Let UMNO be the darcula. Time to join PR and have power sharing.

This was always going to be the government’s strategy. Why werent the people prepared… rights groups shuld have prepared alternative strategies……we need to think howtovercome the antics of this low life government….and think hard

see what did I tell you! The debate on the political ethics of the take over by DSAI can go and in the meantime the corrupt UMNO led BN will do all in “power” to thrawt even if means working with the evil former dictator. The earlier the change takes place the better it will be for the rakyat. All of need to stand by DSAI and his team. Some pertinant questions to ponder> Why the need for ISA for the three people concerned? Why was RPK arrested while claiming Malaysia is free to operate? Why was Sin Chew’s Tan… Read more »

This is extremely disappointing. I have lost all hope in this country.

94. Solidarity Vigil for RPK, Teresa Kok and Miss Tan : Release Them NOW! Dear All, Gerakan Mansuhkan ISA (GMI) together with other friends and NGO will hold a solidarity vigil for Raja Petra Kamarudin, MP Teresa Kok and sin Chew Daily Journalist Miss Tan Hoon Cheng who has been arrested under the draconian ISA. The details of the program as follows: Date: 13 September 2008 Place: Bukit Aman Entrance Time: 8.30 pm We hope everyone will be joining with us and urge the government to release three of them and others from Kamunting immediately. We hope this message will… Read more »

I read some blog recommend not to stage a protest to prevent the … declaring the stage of emergency.

I’m sure there’s something up their sleeves. Third time lucky.

Rakyat, We must stand firm and in solidarity with YB Teresa Kok. We must be seething with anger but we must not fall into their trap. We must stay focus and calm. We are in the darkest hour of Malaysian history. We will fight them and we must fight them, but on the political front and legally. They are snaring us into the trap and they are trying to entice us to give them an ounce of excuse to impose marshall law to snatch our Mother land from us. Rakyat, stay focus and calm. Be angry be very very angry… Read more »

as “road smoke” mention earlier…be calm as i think someone somewhere is up to something….too early to draw any conclusions here yet…

UMNO-BN is lashing out blindly in fear of losing power. Teresa Kok is a moderate politician who fights for all races. Be brave Teresa. We Malaysians of all races are with you. An immoral regime wont last long against people power.They can put all PR leaders in jail but how long can they keep them there? The pressure will be on UMNO-BN. The people are watching.

maybe because of these;

This country has gone to the …. The govt is showing great desperation in hanging on to power, or whatever that is left. Yes the ship is sinking….