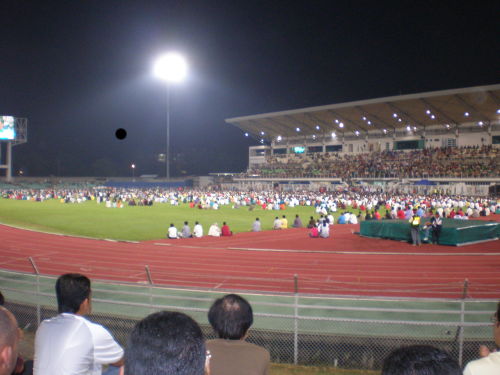 I just dropped by for a few minutes to check out what was happening at the City Stadium last night. Around 15,000 people turned up at the stadium. I could say it was the first time in memory that the stadium has been used for an “opposition” event. But then I would be wrong – for these parties are no longer in the opposition at least in Penang. At least there was no sign of a police presence or FRU personnel at the side entrance facing busy Dato Keramat Road.

The pictures above and below were taken at about 9.45pm. You can see that it is a far cry from the 60,000-strong crowd that turned up at Han Chiang School days before the 8 March general election. But that was then, before the general election; this is now. The event was supposed to start at 8.00pm but the crowd was slow in filling up the 20,000-capacity stadium and the event dubbed “Majlis Pemimpin Bersama Rakyat” only kicked off soon after 9.15pm with the arrival of the speakers, Mat Sabu (Hadi didn’t turn up), Kit Siang, Guan Eng and Anwar. The stadium was about two thirds full then.

A fairly good, multiracial turnout then – but rather subdued. If there was one thing that Abdullah Badawi has done with his massive oil price hike is that he has dampened the post-8 March euphoria among the people. 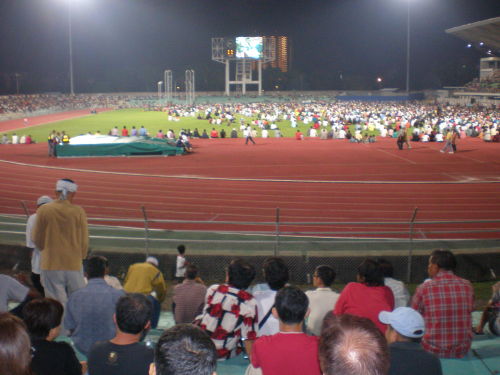 I didn’t stay too long. I’d just dropped by to check out the mood among the people. As one Penangite at the stadium observed, “This is a crowd that is suffering from the rising cost of living. My feeling is that people are hit bad, and the magic and (the sense of) empowerment felt in numbers at (previous) rallies is missing. It’s like an air of gloom and hopelessness has descended.”

Perhaps the key difference from pre-8 March is this: before the general election, many people were determined to make a difference and so they felt empowered and did all they could to effect that change. But after handing power to new elected representatives, they are now taking a back seat and feel helpless to do much without proper mechanisms for popular participation at the local level, including local council elections.

A large number among the crowd appeared to be from the lower- to middle-income group, judging by the large number of motorbikes outside the stadium. It looked as if many had turned up to see what hope the Pakatan leaders could offer them in dealing with the rising cost of living – not just the soaring price of fuel cost but food and electricity as well – and their fast declining real wages (or falling purchasing power).

The euphoria after 8 March has been dampened by a grim dose of reality. While many are impressed with the anti-corruption stance of the new administration in Penang, there is a growing realisation that more meaningful change can only come about after a change at the Federal level – and with deeper and more meaningful people-centred reforms rather than cosmetic measures.

Please forgive Guan Eng for giving his speech in Hokkien because he knew most of the chinese attending the gathering that night were senior citizens who couldn’t understand malay and english very well.Penangites lingual franca is hokkien,please respect our dialect !

Anil, The mood has somewhat become subdued IMHO: 1. Increase in petrol price. 2. People are doubting, since nothing much have happened/improved under the new state government. 3. A number of us felt let down by some of the newly elected Adun and MPs. They are now so “busy” that they have forgotten to read emails, answer phone calls, read SMSes, from “old friends”. Go to this site and you will feel the sentiment and frustration: http://www.usj.com.my/bulletin/upload/showthread.php?t=22769&highlight=jeff+ooi Be that as it may, I am still in favour of having 2 devils fighting each other, rather than only one devil sucking… Read more »

Dear Anil In the face of an ill-conceived policy, i.e. raising petrol prices drastically without an anti-inflation programme in place and without programmes to cushion the impact on low income people, progressive citizens in Malaysia need to think about ways to help ordinary people to cope with this awful situation. I propose the following for starters (please add to the list): 1. Demand that the Govt abolish all fees in the public schools 2. Demand that the Govt give a monthly “child welfare” allowance to each family with a child under the age of 5 3. Push the public transport… Read more »

As for the chinese giving the worst marks, understandable as they are more demanding. But in the end, do you think we want to vote UMNO back to power again?

Here’s another what if for you.

I don’t have the confidence and I will not believe Anwar. He was the one who fights for the Malay very hard and now after he fell he changes his agenda to stand for multiracial Malaysia? Oh come on this is politic. Do you think he is sincerely do this? If he was not kick out by Mahathir and if today he stand as a PM, I bet they will be no ‘The New dawn for Malaysia’ or pakatan rakyat or parti keadilan rakyat or anything that fight for rakyat. He will be the same Anwar as you see when… Read more »

I, for one, have the confidence that Anwar will carry out his promises. If his pride allowed him to survive his ordeals, it will be the same pride that will not allow him to renegade on his promises. This is someone who has shown by example. Yet, there are those who cling on to the what ifs perpetuated by BN. There are those who point out his omissions and commisions when he was DPM. Then let’s ask ourselves whether we have done things in our past which we aren’t proud of. Making a mistake isn’t the problem, not learning from… Read more »

People have felt the misery The costs of living sky rocketing Some haven’t recovered Some have felt the erosion On their money in their pockets Today I went to Post Office Cashing on the rebate I found just manageable crowd Taking forms collecting cash rebates Every one there talking on costs of living The worst is the petrol hike……….. And we hear the government saying Introducing ways to ease the strain In the first place the government doesn’t have to hike It is the money they wanted for something else They found the grounds got angry So they said ways… Read more »

Anwar is always the centre of limelight I feel. He is an EXTREMELY good orator and often, he tells people what THEY want to hear. So he is a good politician. But is he truly a good rakyat-minded leader, or is he going to end up like other politicians out there? We shall wait and see.

Some people like Joachim Xavier hold the view that in a democracy a party that wants to form a government must do so through the ballot box. These people feel it is unethical for any political party to form a government through the defections MP’s from other parties. I beg to differ with you, Anil. You shouldn’t make assumptions by saying that what happened at the City Stadium on Sunday evening was a ‘subdued encore’ as you put it. You were there only for a few minutes and that to, you came only at 9.45pm. What I saw and experienced… Read more »

I went to the stadium last night. I think a lot of people were there for Anwar. I was. To be quite honest, I think Kit Siang and Guan Eng should stop going on and on about the political tsunami. It’s beginning to sound like gloating. Although there was a token number of Chinese there, they should have kept their speeches in Malay and English. I don’t know Mandarin and I was just as lost as many others. Many began making their exit after Anwar’s speech. Didn’t turn out to be as promising as the bright stadium lights had suggested.… Read more »

Hi, I happened to browse through Mkini few days ago and you seemed to have posted a stop-work issuance related post but couldn’t find anywhere in the blog… A vernacular newspaper, namely SinChew did a public opinion poll on Kedah and Penang state government… Penang has some 70% satisfaction rate… while Kedah has 60%… The Penang poll went into more detail and the reporter said Chinese was among the race who gave worst marks… and as Chinese one of the main contributor of votes towards the new state government in March 8… maybe that explained part of the “subdue-ness”? 😉… Read more »

Good cause but like what Mr Smith said, this is one of my unnecessary expenses that I could easily avoid 🙂

I filled up my petrol tank on June 4 and it still stands at half tank today. Why? I have cut down on ‘unnecessary’ travelling to save on petrol.
If I were to be in Penang, I too would have skipped this rally not because I didn’t want to be there but because I couln’t afford to drive up to the stadium.

For those of you that haven’t seen this video

We have confidence in Pakatan Rakyat to bring down the price of fuel and we believe Pakatan Rakyat will form the new federal government soon.BN has proven that it has no clues as to how to manage the nation properly due to its incompetency.High fuel price in world market is a bonus to Malaysia since we are oil exporting country,Malaysia’s economy would suffer if price of oil deteriorates.

The only hope for Malaysians is for Pakatan Rakyat to form the next government in order for Malaysia to face the challenges ahead.BN is a spent force !