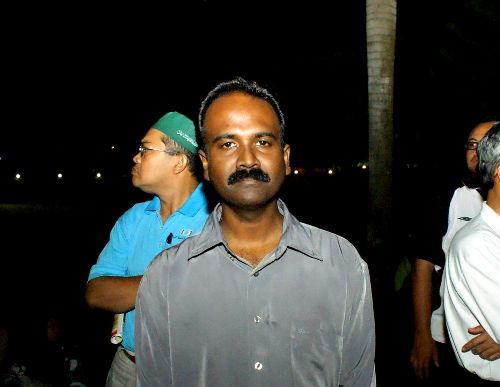 Is it a stalemate now? Or checkmate…

How can the state government function if the exco is barred from attending  state assembly proceedings?

Sivakumar announced the suspensions after the Special Privileges Committee completed a two-day hearing looking into complaints that the appointments of the new exco were unconstitutional. The Committee, chaired by Sivakumar, comprises six other assembly members – five from Pakatan and one from BN, though the latter did not attend today’s meeting.

It looks like a worrying stalemate, which won’t be resolved until fresh elections are held.

It’s time to go back to the people to resolve this once and for all.

Dear Antares, The problem is, in law, a statute cannot be read in isolation. Sivakumar thought the DUN order he uses could overide the Election Commission Act. Again he thought, the DUn order he uses too could override the Sultan. Many legal expert (including Bar Council) held the appointment of the new MB was valid. Hence, going against the Sultan decision is an offence. The court offcourse has the final say whether rightly or wrongly (ther reason for having appeal and revision). On the one hand, he is bringing the case to the court, yet behind the court’s back he… Read more »

The Speaker has followed and acted in accordance with every inch of the law. The speaker has immunity from civil and/or criminal proceedigs. So all those who had made police reports have just wasted their time. To date no one, not even the state legal advisor was able to pin point to a legal provision that the speaker has contravened the state legislation. Go ahead take judical review to fight the suspensions, I am certain the courts will not interfere with the speakers decision as they are very much bound by what is stated in the Federal Constitution not to… Read more »

If those are the actual comments from the IIUM professor, i really pity his students there.

If he thinks that the Speaker has broken some law, then please clearly say so …. Please, we are living in the 21st century now!

It looks as if the Perak DUN Speaker has more power over and above his own Sultan in that he could even nullify the appointment made by the Sultan by suspending the new MB and his EXCO. Whatever is the DUN Speaker’s interpretation or whoever is advising him, it is ludicrous and absurd. DUN Speaker Siva even thinks that he too has the power to declare a DUN seat vacant and to command SPR to hold a by election on an unsigned letter purported to be the resignation letters of two DUN members. By the look of it, he thinks… Read more »

Please do me favour.

YB Sivakumar, a lawyer, looks more handsome than the picture above. Please do some justice to this guy by putting a better picture of him. He is an educated Speaker.

Dear karma, That’s the only picture I have. It was taken while Siva was in the thick of the Perak crisis, so it’s understandable if he is not looking his best. – Anil

Sivakumar is really Stateman.
you got my respect.

another BN and its … parties will bite the dust in Perak….

Make a police report against the Perak Speaker? For what?

Shouldn’t the PM of a constitutional monarchy based parliamentary democracy know that the Speaker is acting legally and well within his constitutional powers conferred on him in that role by the constitution of the state of Perak?

Well done Mr.Speaker V.Sivakumar! We Perakians and many many supporters are so proud of you. You are the Hero of the moment when there seemed to be no hope left. Only please be very cautious where ever you are,be it outside or even in the privacy (not anymore) of your house. Even if you must drink a glass of hot cows milk at night before retiring, please drink from a mug, as the (certain people might) jump to conclusion that you are a Samsu or Tody drunkard and start to demand you to step down and call the Forensic Cops… Read more »

” THE WANITA GEMUK IS ABOUT TO NYANYI”
MALAYSIA IS A DEMOCRATIC COUNTRY
NAJIB AND HIS …., HAVE THE COURAGE TO FACE THE RAKYAT NOW…

Hey, Zambry and your Exco, dont always hide behind the Sultan and always say that you are appointed by the Sultan. Tuanku may have appointed you but the responsibility of governing the State is up to your capability. Of course you are going to be faced with obstales,and difficulties from Pakatan. The other side will come up with law suits, suspensions and make life difficult for you. This is part of strategy in politics. They are going to make life difficult for you. Tuanku can appoint you but he is not going to teach you how to govern. The rest… Read more »

The best way to solve the Perak crisis is to call for a statewide snap election….

I for one as a 3rd generation Malaysian would not like to see the crisis deepen. It will have very negative impact on the sovereinty and economy of Malaysia. For sure FDI will avoid our country for a long long time.

We are not snakes.

Wah!. No assembly. No budget. No money. Cannot pay bills and gaji.
Big pot of s***, man. This is a shut down of the whole state.

Lets return back the mandate to rakyat of Perak. We need to kick all those umno … out.
Perakians will decide their destiny.

… To break the impasse, I’ve ruled out a snap election to be called by BN as they can only CLAIM that they are DEMOCRATIC and have the people’s support, but yet do not have the guts to face the rakyat in a snap election.

Instead of doing the easier thing like holding a fresh election for the people of Perak to decide which party should govern the state of Perak,our rulers opted for a more complex way of forming a new government without first understanding the state constitution.

At the federal level,our incompetent BN government (appears to be focusing on) nude photos of PR state assenbly women in order to topple the PR state government,a job they are quite good at though but considered a total failure when come to managing the country.

Beware that BN will counter by spinning that this is an abuse of power.

Sepandai-pandai Bee End toppled Pakatan from Perak state government, they over looked this loop hole. Come on Bee End, be a gentlemen, disolve the state assembly and let the rakyat decide, don’t be a coward.

BN reps’ been telling the MSM that the silent majority in perak support their’s and the sultan’s move. good. so wat r u BN people afraid of? let the ‘silent najority’ vote u in OFFICIALLY in a state-wide reelection and end all these non-sense.wat r u afraid of mr BN?

… please do a state-wide elections. wtout it the situation wil only get worse n worse wt retaliation and counter-retaliations from both sides. it’s a quagmire!.