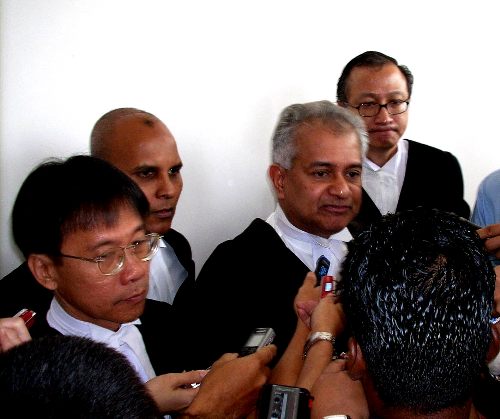 V Sivakumar’s lawyers are going back to court again in another attempt to represent the Speaker, says my source in Ipoh after a press conference held by the lawyers.

Yesterday, the court ruled that only the state legal adviser could represent the Speaker.

This time the lawyers will argue that under Article 132 (3) of the Federal Constitution, the Speaker is not part of the public services, and therefore he should be allowed to engage private lawyers.

The public service shall not be taken to comprise –
(a) the office of any member of the administration in the Federation or a State; or
(b) the office of President, Speaker, Deputy President, Deputy Speaker or member of either House of Parliament or of the Legislative Assembly of a State; or
(c) the office of judge of the Supreme Court or a High Court; or
(d) the office of member of any Commission or Council established by this Constitution or any corresponding Commission or Council established by the Constitution of a State; or
(e) such diplomatic posts as the Yang di-Pertuan Agong may by order prescribe, being post which but for the order would be posts in the general public service of the Federation.

With so little confidence on their own credentials, how can we the rakyat have confidence in your rule?

Wait a couple more years, if still dare not face the electorates, then what??

Expounding the constitution and whatever statutes we have in Malaysia is quite a waste of time… The executive wields his power over the court to bound the hands and feet of the Speaker, now some more want to stuff some dirty rags and shut his month…

So far, from what I see, it is no longer a matter of the law… the rule of law no longer reigns… What the BN wants is law… what does not please the BN is junk.

I am just thinking how independent this JC can be, considering he is on a 2 year term and need to be renewed on a regular basis. More so because his term baru habis, so now need some big shot to give him a new contract…. Of course I am not suggesting that the judiciary is tainted. But it must be human nature to worry about losing one’s job, esp in times like now. But insisting on hearing the case in chamber… hmm… considering these cases are of PUBLIC INTEREST, one just wonder what is the honourable JC trying to… Read more »

This is rediculous. How come private lawyers cannot represent the speaker and yet the court injunction against the speaker can put through by private lawyers.This can happen only in bolehland.
Dont be tricked by BN. They are trying to create controversy if the speaker is represented by the state legal adviser. BN can argue against any decisions made the State LA. They can say it is conflict of interest.

mr anil can u get for me profile of mr v.sivakumar

Thanks Anil for reproducing Article 132(3) in your post. Even laymen can understand what they read of this Article!

The MACC top officials are not aware of Article 132(3)(b) of the Federal Constitution as they still claim that they can investigate the Perak Speaker!

Let’s wait the reason(s)or ground to be given by the court’s judge if he still maintains that the Speaker cannot engage his own private lawyers!

Aha… A comedy of errors to rival my play. Excellent, excellent. I elect Ridzwan and Zambry to be my lead actors..!

hmm, you mean the judge is not well versed at all? or…..oops heard his term has expired.

They should have been the one fighting for the Batu Puteh Rocks against Singapore, rather than what-is-the-name-of-the-fella who lost our rocks???

an idiot will understand scetion 132 but a … sees differntly.

Why should they go back to the judge whose term as JC has expired. He is not eligible to sit on the bench. Read here http://www.themalaysianinsider.com/index.php/malaysia/19638-perak-muddles-further-with-ridwans-eligibility-to-judge

The AG/state legal rep advises and reports to the PM/MB who is the head of the Executive/Government part of the democratic system.

The Speaker is part of the Legislative, and so is/must be independent of the Exceutive in that role.

If the Ipoh High Court did not understand this abc of the system, then why bother going back there for any..er rational, logical or reasonable help/answer/decision? It’s just a waste of everyone’s time isn’t it?

Of course we all know that, but try explaining to illiterates.