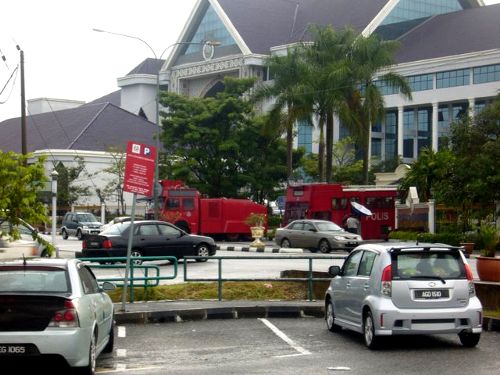 FRU trucks take up position this evening at the entrance to the Perak State Government complex, which also houses the State Assembly building – Photo courtesy of M Kulasegaran’s blog

No doubt Datuk Seri Dr Zambry Abdul Kadir will now appeal this decision to the Court of Appeal, and further legal arguments will be advanced.  Whichever side that loses at the Court of Appeal will then appeal to the Federal Court.  The issue will go on and on.  Each round of legal battles promises finality but fails to deliver it.  Time moves on, and the business of running the State Government continues to be sidelined.

The answer ultimately does not lie in the courts.  The Malaysian Bar once again reiterates its position that the time has come for all concerned to acknowledge the writing on the wall.  Both sides of the political divide must now realise that power has to be returned to where it rightly belongs – in the hands of the people, the electorate of the State of Perak.  Let them cease all further jostling and manoeuvring for political power.  Let them exhibit statesmanship.  Let them once again seek the mandate of the people.  And let the people decide.

1850: Jalan Istana, leading to the usual entrance to the State Government complex, is still open to traffic. The eight riot police trucks, including two water cannon vehicles, are stationed at the entrance. A downpour drenches the city now. Showers of blessing?

Just before 6.00pm today, eight riot police trucks arrived at the Perak state government complex, which also houses the State Assembly building, along Jalan Istana to take up positions, an eye-witness told me.

Oh, the trucks want to secure the building.

Who knows it may face the challenge like the same way the plaque ended under the tree recently?

The authorities now want to go after objects, after subduing subjects last week.

Objects easier to handle.
No need to take down reports, buy food and lawyers wont agitate.

Kasi chance lah for people to do their job.

Incidently, this is for good reasons too. To maintain law and order thingy? Do not let these to provoke but maintain peace and calm. Trust the rakyat and PR will know how to behave unlike ….