About 15 hecklers created a ruckus to try and disrupt a vigil by about 200 people for Maria – and Zunar, who is being released – at the Penang Esplanade this evening.

This is part of a culture of attempts at mob rule by suspicious groups who want to infringe on the basic rights of ordinary Malaysians to freedom of assembly and of expression.

After taking shelter from the rain in the porch of the Council building, the crowd attending the vigil then moved to Speaker’s Corner when the skies cleared at dusk. 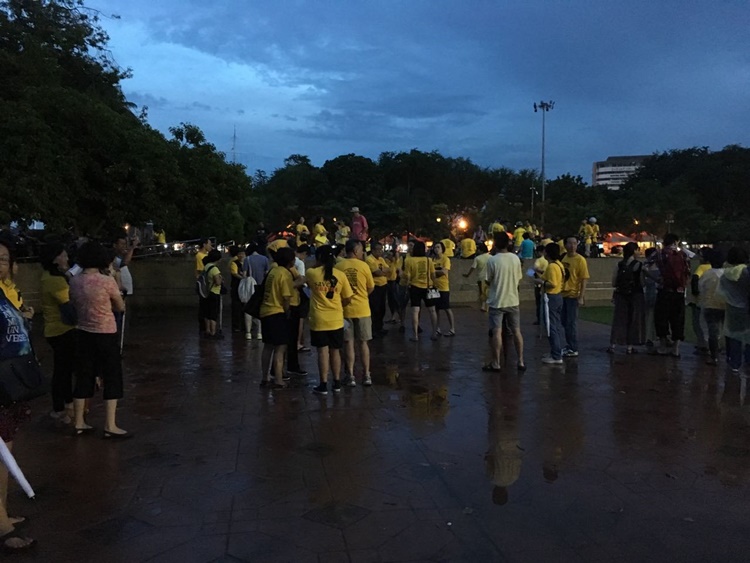 Earlier today, the Aliran annual general meeting was held with members unanimously calling for the unconditional release of Maria and Zunar. Aliran also proposed that Malaysians hold daily prayers at dusk for Maria’s release, either in groups or individually, according to our respective religious traditions, until she is finally released.

A good article on The Economist: http://www.economist.com/news/leaders/21710820-opposition-has-do-more-win-over-rural-malays-malaysians-underestimate-damage Until now foreign investors have been fairly sanguine about the economy. But they are growing rattled. The ringgit has depreciated faster than other emerging-market currencies. Last week the authorities asked foreign banks to stop some ringgit trading abroad, raising fears of harsher controls. Rural ethnic Malays, a crucial constituency, feel that the 1MDB scandal is a remote affair. Even some educated urbanites still favour Mr Najib’s government over the opposition, underestimating the damage being done by the scandal. If change is to come, the disparate opposition needs to do a better job of… Read more »

It is proclaimed that a Malaysian leader is willed by God.
So, be obedient, pledge unwavering loyalty & “see no evil, hear no evil, speak no evil”.
For the past record of exemplary divine-chosen leadership, ask a Sarawak CM.

Not so sure about the Sarawak CM, who has somehow softened his stand on the Hadi’s hudud bill after some ‘advice’ from the DPM. More surprise soon for Sarawakians, as Sunday Star’s Joceline has reported that Umno and PAS are brothers in Islam, and Adenan would not defy ‘order’ in the name of religion.

I assume Sarawak CM cannot sleep well.
Not a good self-PR to invoke the name of God to gain reputation or political sympathy > votes.
Then there’s the law of Karma which is decisive.

Now Umno has said BN will take over Act 355 to push for hudud bill on behalf of PAS, wonder what Gerakan (Lian Teck Meng), MCA (Chong Sin Woon) and Sarawak”s CM Adenan have to say, as Umno has never seek the advice of its component parties on this matter.

Adenan will face backlash from those disappointed Sarawakians in GE14.

This week TV1 to TV9 will sing praise of Najib in Himpunan Umno.
Already Najib is erasing Mahathir’s legacy with a new KL PWTC.

Maria Chin released after 10-day detention
https://www.malaysiakini.com/news/364446
They cannot / dare not carry out the 28 days detention under global pressure.
We are happy for you, Maria Chin.

The Chinese couple who were found guilty of harassing MBSA officer werea jailed 14 days and fined RM3K. Whilst the 11 pro Umno mob who created trouble at parliament compound were released and probably get away scot free for assaulting an MP. Is this not pure and blatant discrimination of the highest order?

Animal Farm: some animals are more equal than others.

Remember Animal Farm is about pigs trying to be more equal than other animals.
Lol.

Police free 11 Tajuddin supporters after one night in lock-up
https://www.malaysiakini.com/news/364391
Just like that?
THEY SHOULD BE CHARGED!
Otherwise, this may set a precedence for future wanna be gangsters @ Parliament from we know who.

I believe these people are not charged, only 1 night stay at the police station, possibly fed with free Nasi Lemak and Teh Tarik.

Najib’s secret weapon – the mute Malaysians
https://www.malaysiakini.com/columns/364377
‘Pride cometh before a fall’?
I mean the fall of the cockerel (Kai Kong).

Projek Kunci Kebebasan is a project to build a monument to commemorate 10 years of the BERSIH movement. Every BERSIH participant is encouraged to be a part of this project, literally, by contributing a physical key to build the monument.

The monument is portable for a tour through towns and cities in Malaysia. The gallery containers housing the monument can be used as an exhibition space to tell the BERSIH story.

A public square is being sought to install the monument permanently as a symbol of democracy and the rakyat’s effort to build a better Malaysia.

AG seeks heavier penalty for couple who harassed MBSA staff
https://www.malaysiakini.com/news/364363
The sentence has been meted out, why so free to microscope the case again?

Martial arts fighters want to knockout Jamal in the ring
https://www.malaysiakini.com/news/364362
Sure Heboh!

Dedak Rm50.00 at work again?
No wonder one fella #1 declares no fear of Dr Mahathir, much less the rule of law & order.
Headache time for law enforcement!