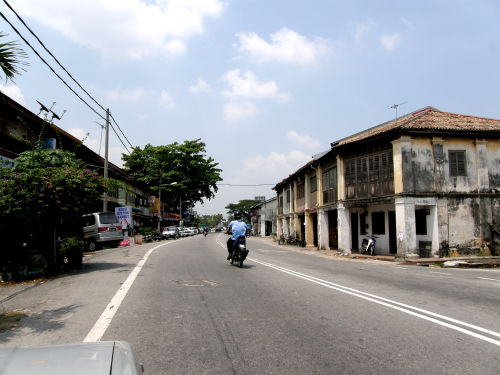 The lull before the frenzy: This was the scene when I dropped by at Permatang Pauh the day after Wan Azizah stepped down as MP to make way for Anwar

The semi-urban town of Permatang Pauh is gearing up for a what could be a pivotal by-election that could influence the direction of events in coming months.

The political situation is in a state of flux as the Barisan Nasional and Pakatan Rakyat enter a crucial phase that could determine the direction of the country.

In the foreground are the high-stakes allegations – the sodomy complaint and the Altantuya murder. In the backdrop, the equally high-stakes political battle between the leaders of the rival coalitions.

The road blocks in KL and the bizarre way Anwar Ibrahim was arrested recently – and then released – did not help soothe frayed nerves. The big question now is will he be arrested again and charged before the by-election?

There are a couple of crucial differences between reformasi in 1998 and now though. Back then, Anwar’s arrest galvanised the reformasi movement. That fledgling movement was temporarily deflated when its nemesis, Tun Dr Mahathir Mohamad, stepped down in favour of Dato Seri Abdullah Badawi, who promised reforms and then led the Barisan Nasional to a landslide victory in 2004.

This time around, Anwar’s predicament comes after Makkal Sakthi and the March 8 ‘political tsunami’. The stakes are now much higher. The PR leaders have indicated that they intend to take over the federal government by Sept 16 – although so far, they have little to show in terms of defections.

The other difference between 1998 and now is that we are dealing with a politically more mature public, with greater access to alternative news, scrutinising every move by the main protagonists.

There is also a sense that many Malaysians have grown tired of racial politicking (though of course a significant remnant are not averse to being manipulated by race-based politics). They also seem to be tiring of the sordid allegations and counter allegations. That said, many still want the truth – including what happened to Balasubramaniam, the private investigator who dropped a bombshell, and why Saiful’s police report has not yet been revealed.

Umno itself is clouded with uncertainty. Some observers perceive that the party – and by extension, the country – lacks strong leadership. But Abdullah has shown that he can outwit his rivals – and hang on to power, despite the major setback to the BN on March 8. To his credit, he has so far resisted the temptation to swoop down on critics and dissidents. But his approval rating has now plunged to 42 per cent – and as they say, desperate times may lead to desperate measures.

All eyes are also looking ahead to the Umno elections in December to see if anyone will challenge the party president despite the transition scheme stitched out between Abdullah and Najib. Already we can see some signs of trouble in the ranks.

For now though the attention of most Malaysians will be riveted on Permatang Pauh for what could be a pivotal by-election.

But while the politicians – and Malaysians – are distracted, economic conditions are deteriorating. There is a sense of foreboding over the future with 59 per cent in a recent poll by the Merdeka Centre feeling that economic problems are the biggest issue facing the country. The oil price hike has eroded local purchasing power, curbed consumer spending, and sparked a run of inflation, dampening business sentiment. Soaring inflation is likely to be a big issue among the working class in Permatang Pauh.

That’s not all. Professor of Economics at the NYU Stern School of Business Nouriel Roubini says the United States is facing its worst financial crisis since the Great Depression and will undergo its deepest recession in recent decades. He predicts a dozen major economies will be hit hard while the rest of the world will experience a severe growth slowdown. Malaysia is hardly likely to be spared the pain.

Fasten your seatbelts. It’s going to get bumpy.

Well said, terang bulan, gooeyglobs and miwaki…. my kind of people. Let’s keep the sarcasm coming in thick and fast and bury these freaks of nature once and for all.

To All PR supporters, I think we should brain storm on how to ensure DSAI win the Permatang Pauh By election. As we well aware, BeeNd (could resort to) whatever dirty tricks to woo the support from the Permatang Pauh voters! So what is our strategies for counter attack? 1. Like what I can see now, the … Saiful had start barking here and there and keep on emphasize his willingness to swear on Quran! …(He) is allegedly misusing the name of the Religion to turn the wrong things into right things! 2. …Ezam will used the NEP and Ketuaan… Read more »

Let this first small step be the giant leap for the RAKYAT of beautiful Malaysia.
SYABAS DSAI!!!

Dato Seri Anwar can contest in any constituency and win,not like UMNO’s … who have to hide behind small villages that are deprived of water and electricity.

People like Abdullah,Najeep,Hishamudin and Rafidah put together also cannot match one Dato Seri Anwar.Malaysia could be a better place to live without your existence.Permatang Pauh will be the place to end BN’s administration and the emergence of new government for the people of Malaysia.

Anwar is just a person Like everybody else Who is afraid of him? Nobody in the political arena It is the electorate in the constituency There lies the match maker of rise and fall Of a leader who wants to sustain his glory Anwar is just a person Bridging the suffering of the people On the Titanic uncontrolled mismanagement Of the country’s wealth and standing Permatang Pauh will have its glory Embedded in its mindset the good son has returned You think you aren’t afraid of Anwar………. Yeah you are right at that point You should be afraid of Permatang… Read more »

it is good for the nation… we want a 2-party system for a better check-and-balance in the country. we don’t want politicians who fatten themselves with rakyat’s wealth. we want accountability. a 2-party system will ensure a better malaysia for all. it can be anwar or any other leader… a politician’s portfolio is not for keep. it is more than that. it is a responsiblity. it is good to see anwar or PR helm the nation, this time around. we want changes, at least for 1 term. good luck to anwar and PR.

Why the Umno’s clowns have to say that DSAI has to go for a safe seat – Permatang Pauh? Are they licking their own wounds before the battle could begin? The answer is simple – strategy. MCA … and Rafidah say that they had anticipated this would happen. They had anticipated my foot. If so, why don’t they openly announce it earlier? Our sleeping PM said that he feared not. How could he fear when he hardly knows what is going on? He is just a scarecrow to little paddy birds but not eagles and hawks. Let us see what… Read more »

Ever since that much despised turncoat Ezam Mohd Noor joined the ranks of UMNO, he had been making all kinds of stupid, nonsensical and provocative jibes at his former party Keadilan and Anwar Ibrahim, his mentor. When Anwar announced he wanted to contest in Kulim in a by-election, Ezam came out boldly to tell all and sundry, that he wanted to contest against Anwar, the same kind of hot air he let out when asserting he wanted to contest against Najib in the 2004 general election. Now that Anwar will be contesting in Permatang Pauh, UMNO or rather Pak Lah… Read more »

Looking at the picture, it looks like a very sad place. It seems the Nation has forgotten about it. The residents will be glad that when DSAI becomes the MP and eventually the PM, the promised development will finally arrive. There is no doubt in my mind that DSAI will win this one with a handsome majority. BN might as well concede defeat at nomination day and withdrew their filing. But for the sake of democracy, i hope to see the lively ceramahs. You can be sure every citizen will be following the developments of this by-election keenly. If BN… Read more »

this by-election is govt or central govt vs govt in wating(pakatan)or state govt.100% sure anwar going 2 win.no one can stop him.permatang pauh is kubu anwar(pkr).