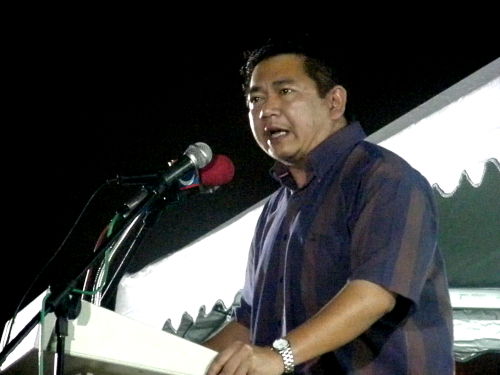 Busy day: Pas Youth leader Salahuddin Ayub speaking at a ceramah on Saturday night (9 Aug) in Permatang Pauh – after having taken part in the protest against the Bar Council’s forum in the morning. Sharing the platform that night were Anwar and Guan Eng.

The next day, I wrote the following piece for The Malay Mail from a food court in Permatang Pauh.

Still a calm before the storm

The rays of the evening sun stretch right into a hawker centre offering the Malay version of char kway teow.

Half a dozen tables are filled with local residents, chatting away as the evening breeze blows.

It would be hard to tell that a widely-watched by-election is taking place in Permatang Pauh on Aug 26. Life goes on as usual and the only tell-tale signs that something big is about to happen are the fluttering Barisan Nasional flags outside.

Further down the road lies the entrance to the old town, the junction draped with BN, Umno and PKR flags, and nearby is a newly opened election operations room of an Umno branch. A couple of hundred metres further up the road is another stall, draped with PKR flags, displaying reformasi paraphernalia.

Thus far, the main drawcards here have been the two ceramah perdana on consecutive weekends by Datuk Seri Anwar Ibrahim and a Malay unity event by Umno leaders.

On Saturday night, onlookers in the crowd had noted the presence of a speaker from a Pakatan component party who had earlier that morning protested the Bar Council forum on conversions alongside Umno protesters.

But no one in the ceramah mentioned the incident, an indication that the Pakatan Rakyat, like the BN, would find it difficult to develop a common position on this. As in the other ceramah, the focus was on the same issues of oil prices and inflation, corruption, and sodomy allegations.

The pace of the campaign is likely to quicken once election fever grips the town from nomination day on Aug 16.

The goreng pisang vendor along the main road had placed his cart directly below the faded signboard of an Umno branch.

When asked who was likely to be the Umno candidate to contest against Anwar, he said, “Cakap orang Jalil atau Pirdaus – tapi kita akan pasti hanya hari pencalonan.” (The talk is either Jalil or Pirdaus – we will only know for sure on nomination day.)

Other possible candidates have been mentioned, but thus far no clear favourite has emerged.

The town’s hawker centre began to fill with the dinnertime crowd, largely Malay, with a young Chinese couple the only exception. The centre was apparently never so popular but stall owners said they were making plans to stock up for the 10-day campaigning period from this weekend when national – even international – attention will be on this normally quiet town.

ask them to evaluate the contribution of flip flop paklala to penang and the country.
and what has BN done after 08032008.

He might not kill someone, but he is against his own alliance, ANWAR and NIK AZIZ which allows the open forum to be done. They should share the same view and opinions. But what is this? So tell me again, why did the blogger stuck up?

I agree with Phua,

That is the most important message the people need. And i wonder why the blogger is so stuck up on the role played by Salahuddin, did he kill someone???

“Inflation, corruption and the urgent need for change”

That should be PR’s message.