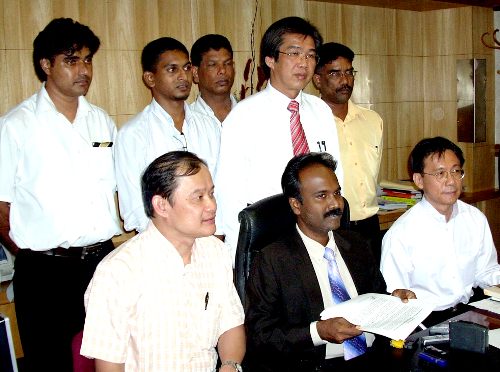 The emergency sitting is to vote on two motions: to affirm support for Nizar as the MB and to seek a dissolution of the state assembly, paving the way for fresh polls.

“As the state assembly of Perak now remains in its first session after being constituted and having considered the dispensation of Standing Order 27(3) SOSLAP with powers of such dispensation provided for under Standing Order 8 SOSLAP in matters of emergency, I wish to inform that the State Legislative Assembly of Perak will convene an emergency meeting on the 3rd day of March 2009,” said Sivakumar in a statement.

He pointed out that his earlier written request on 6 February to the Sultan seeking his agreement to convene a meeting of the Assembly as soon as possible had been overtaken by events the same day.

WHY NOT ALL PR PERAK ADUN BECOME INDEPENDANT AND VOTE TO DISSOLVE STATE ASSEMBLY. INDEPENDANT 31 : BN 28

These Kataks betrayed the Rakyat who have voted them in. It’s the Rakyat who has been cheated. Everyone knows where the money comes from, definitely not from the Bee-End boss’s own account and pockets. It’s the Rakyat’s blood and sweat money. The Rakyat (including their next generations) will have to suffer for another 40 more years because of the tolled Highway and the so-called privatisation of water and electricity. The only way for the Rakyat to claim back their rights is to use their votes wisely in all coming by-elections and the next GE (could be a snap poll in… Read more »

U are all a bunch of hypocrites….i dun support BN or PR BUT isn’t u all who vote 4 this PR kataks(stupid PERAK PR supporters)…..and u all have the cheeks to says that PR REPRESENTATIVES is the best..no corruption..but in the end it prove dats u PR supporters had been conned…hahaha..served u rite..I am wondering where does all this corruption money comes from…tink 4 urself…check the internet for the no 1 & 2 dats is voted to give the most bribe in the worl

Zambry, where is your Queen Counsel?
Bring it on!
The Perakians is waiting what sort of drama you BN … are going to make again this time.

Let the rakyat decide once and for all. Dissolve the assembly.

It is many a Malaysian’s fervent hope that a state election in Perak is called.
Its akin to a fight in the ring whereby the best man wins. No more verbal jostling, mud-slinging, and running to UK for sympathy. If BN really got …, they will say ‘bring it on’ but then, judging by their UMNO youth’s confrontation of an old man in a wheelchair and claiming victory, one cannot stop wondering if BN actually stands for ….

lets just wait for their response.

why plead for a chance and acceptance? let the people speak thru a bye-election. at least, state of perak will get all the goodies and candies that come along with elections. and once and for all, we … the Hee … so that she can have time to enjoy….

May God intervene for fresh elections 🙂

A motion will be table to seek a dissolution of the state assembly but the sultan’s consent is still needed for the dissolution. If consent is not given, there will be no dissolution and the constitutional crisis will drag on. There are 3 ways to solve this crisis: 1) dissolution and fresh elections 2) emergency rule from Federal 3) ignore rule of law and muscle their way through No. 1 is least likely as BN will be voted out. No. 2 is politically unacceptable as there is no civil disorder in Perak. No. 3 perfectly within Umno’s culture and arrogance.… Read more »

Problem is that UMNO thinks they own the Government and country. How about Sarawak and Sabah? When they join to form Malaysia, they also come under Ketuanan? Then they must be jumping from one colony t o another colony.

Speaker of Perak – go for it and majority of Perak and Malaysia support you.

After 52 years of Independence, on would have thought that Malaysia would have mature and practice Parliamentary democracy without question. Should one will to use what transpired in Parliament where
hooligans were allowed to mob a MP at the very doorstep of the Lower House, it certainly put doubts in most Malaysians’ minds…except UMNO followers.
Double standard practice by the UMNO-BN govt is the rule of the day.
How can we expect to see a healthy and progressive nation taking shape?

Wow!!!! i like i… i like it… settle it once on for all… if the assembly dissolved… my vote sure for PR…

In the meantime, GDP growth is at 0.1% and soon we will be in a recession…

we wait and see what will happen…