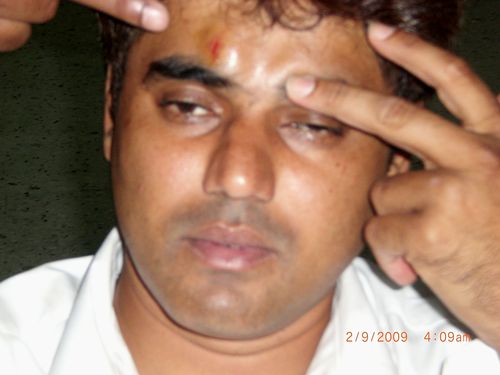 He was among three elected Pakatan reps detained when they tried to attend a sitting of the Perak State Assembly on 2 September.

Recalling the incident, Keshvinder said he had walked up to the police to urge them to stop pushing the Pakatan reps because they were in the process of dispersing.

“Suddenly, about five people grabbed me and threw me on the floor. It was like wrestling you see on television. They were so rough,” he said.

“My head bounced off the floor. To make matters worse, someone placed his foot on my head while another kick me on the stomach. Another pulled my tie, choking me,” he added.

HAHAHAHAH AFTER SEEING SO MUCH OF BRUTALITY FROM THE POLICE AND UNFAIRNESS OF BARISAN NASIONAL…..HE FINALLY QUIT DAP TO SUPPORT BN….HE IS REALLY MAKING A FOOL OF THE RAKYAT…HE THINKS PEOPLE WILL TRUST HIM….

This is what I want all democracy-folks to do..Take down the Police officers names and remember their faces. Remember them and DO NOT DO ANY BUSINESS with them. DO NOT SELL THEM ANYTHING. This is what happens to the frog Hee back in Jelapang where all her family members were given the boycott. They have to go outside of their constituency to get supplies. Do the same to those cops and their families. Let them feel the heat where people’s power are greater than their power. Next time they might think twice before carrying out their brute attack on us… Read more »

Cow-head fiasco no arrests BUT ADUN wanting to open sitting being arrested and brutalised!!

This is why we must get BN out totally!! Enough is enough!!

Is this IMalaysia!?…
What’s this govt up to?

It it difficult to be an ADUN nowadays.

You have to attend demostration, risk being harrased by police, MACC, etc.

It is hard to believe that we have a democratic
state in Perak. This sort of hooliganism is going
on in the State Assembly. Perak government is being run with the assistance of the Police and the Hooligans. People of Perak are watching this
dirty and unruly situation and will reward the BN
at the right time – they will not forget these incidents easily.