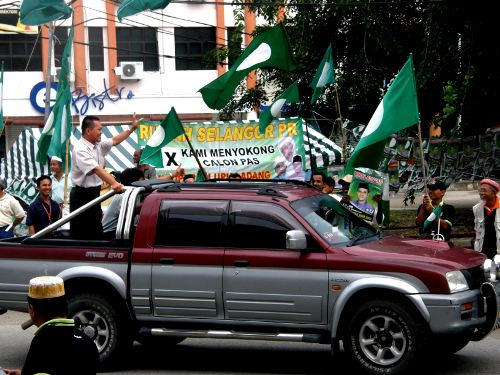 Pakatan supporters in upbeat mood ahead of the polls: this was the scene at a main road in KT at around 4.00pm, when Pas, DAP and PKR supporters waved at passing motorists.  Among the enthusiastic road-side flag-wavers were bloggers from KL and activists from the PJ Abolish ISA vigils

2010: It’s proving to be hard to call, but Pakatan supporters are quietly confident that their candidate will coast through with a 1,000 to 2,000-vote majority. A few are predicting a bigger majority. Much will depend on whether Pas can build on the support it already has.

The Pakatan campaigners are everywhere. When I take time off this evening to look up the house I lived in when I was seven along Jalan Cerong Lanjut – I actually find the terrace house still standing, much to my delight – I notice a familiar figure walking up to the Hindu temple nearby. I take a closer look and it is Sivarasa Rasiah from PKR accompanied by a DAP activist. I stroll back to the old house and promptly run into a couple more DAP activists, who are making the rounds.

Numerous police vehicles can be seen driving up and down the streets. We even spot four police personnel on horseback. Traffic police are at almost every intersection in town. Dozens more police trucks and landrovers and scores of police bikes are parked outside the police headquarters close to my former school, Sultan Sulaiman Primary School. The grounds next to the police headquarters have been turned into a large campsite with huge white tents complete with air-conditioning.

Earlier, in town, I run into a Malay gentleman by the road-side, your typical person-on-street. He is happy to talk. I ask him what his prediction is.

He says the Pas man will win hands down – “100 per cent sokongan daripada orang kampong“.

I ask him why.

At a restaurant nearby, BN campaign workers, two Malays, are having their lunch (nasi padang) earlier, sharing the same table as us.

They are quietly confident their candidate will win. “Sudah tentu BN menang,”  one of them says. He does not elaborate.

The other guy thinks I am asking his colleague about local attractions. “Tujuh puluh. Di lorong belakang,” he says, quietly.

Then he makes a hand gesture and I realise he is talking about what the rate for a call girl is. He is embarrased when he realises that he has misunderstood my conversation with his friend and apologises, “Sorry-ah.”

Meanwhile, the BN has reassured Permatang Pauh residents that they will finally get RM4 million in aid for mosques and suraus that was pledged to them during the by-election there last August. A bit late, huh.

“This is the first time in a by-election that they are announcing allocations for another constituency in a different state on the last day,” says Zunar, the Suara Keadilan editor who had highlighted the report on the front page. The expose probably sent the BN into damage control, he adds, as the television news tonight has devoted the first five minutes to Permatang Pauh.

Just like what we saw in Permatang Pauh recently, the sentiment here is obviously in support of Pas – the Opposition. Eight out of 10 people asked said that, “We want a stronger voice in the Parliament.” Seemingly, BN is having an uphill task against the popular Pas candidate. Umno’s candidate apparently is not popular even among many Umno supporters. There are factions in Umno here.

Among the Chinese, many still felt hurt with the comment made by an Umno man some time ago about the Chinese in Malaysia. They generally feel that Umno is not fair to them. Umno only comes to them when they want votes. After that, it’s the same old rhetoric against the Chinese. “Enough is enough,” said Chow, a businessman in Kampong China. The general sentiment among the urban Malays is for Pas – the Opposition. It’s 50-50 among the small Indian voters. It’s 60-40 for Pas among the Chinese. Looks like Pas is going to win this by-election.

My family was there from 1965-1970. We stayed in 50-1, Jalan Cherong Lanjut. I’m sure of the address ‘cos I still have all the postcards my father sent home from overseas.

Hi, I lived on Jalan Cherong Lanjut when I was 7 too! Used to walk to the Sultan Sulaiman school – we had to cross a plank across a ditch/drain behind the house.
We could have been childhood friends, perhaps 🙂 Many evenings, moms would gather on the backlane and feed their children who were running around and being given dinner at the same time – early training for multi-tasking, I suppose.

Dear CPK, small world, eh…we could have been neighbours…quite possible…what year were you there? – Anil

Soon, an UMNOputra will send you a threatening letter on how “negatively” you covered BN campaign in KT like what we saw after PP rout.

Anil, I finally get to meet you in person with C and Mark!
Keep up your good work but please give Pakatan a break lah!

… it’s seems confirmed that PAS will win the by-election. Many BN big-wigs have left Kuala Terengganu. Many have abandoned BN posts, I can’t understand why? PAS and PR supporters are still relentlessly working to ensure a big majority victory. The spirit is there… they are so united – Malays and Chinese, those from other states and the locals. It’s people solidarity I see. Just amazing…

Yes, vote Pas. Vote for hudud. Thank you very much.

can’t wait for another tsunami in KT..
thanks for the update anil…

NEITHER TRICK NOR FEAR OF STICK

UMNO/ BN is playing dirty. They have their good friend Robert Mugabe of Zimbawe here in KL to advise them on playing even dirtier tricks.

Got this sms from umno guy in K.trg….