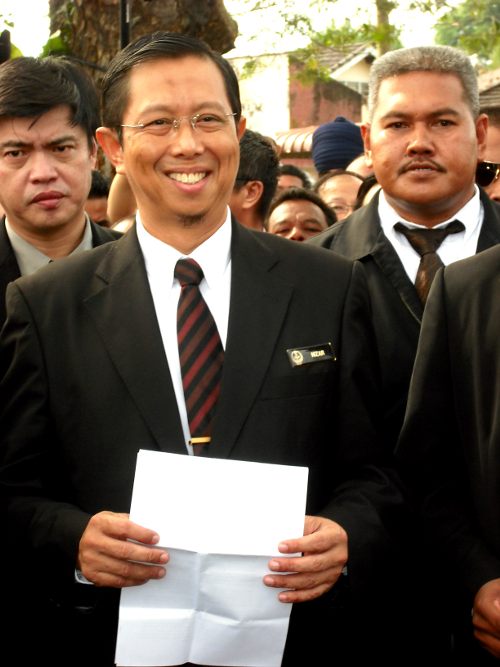 It looks as if the “progressive” or modernist votes have been split between Husam and Mat Sabu, who together collected 541 votes (54 per cent of votes cast) compared to Nasharudin’s 480 votes.

In comparison, Nizar easily topped the contest for committee positions with 85 per cent of the votes.

The result could have been different if Mat Sabu had pulled out of the contest for the deputy presidency leaving it as a straight fight between Husam and Nasharudin.

“I was surprised that Husam’s aides didn’t prevail on Mat Sabu to withdraw,” said a political commentator in an immediate response. “They were hoping that he would withdraw – and in the end, he played the spoiler’s role.”

“The big question is why didn’t Mat Sabu withdraw and what did he hope to achieve?”

Just before the official results were announced, rival news portals Malaysiakini and Malaysian Insider this morning both carried headline reports that Husam had won, according to unofficial sources.

When it became clear that Nasharudin had won instead, the Malaysian Insider was quick to interpret his victory as a triumph for the pro-Umno faction in Pas and a blow for Pas’ Pakatan partners.

But it is clear that Nasharudin bagged only 46 per cent of the votes cast, suggesting that support for cooperation with Umno is slightly in the minority.

The future of progressive politics in Pas perhaps lies in its second echelon leaders with Nizar bagging a total of 854 votes (or 85 per cent) of 1,004 votes cast.

“A significant proportion of the votes for Nizar may be due to triumphalism, in the sense that Nizar was a popular MB and many of the Pas faithful would like to revel in that,” observed the commentator mentioned earlier. “But it is clear that he has an inclusive multiracial approach, reflected in the overwhelming support he received in Kuala Sepetang (in Bukit Gantang), which is predominantly Chinese.”

Mismatches that I was taking about is now an issue now.

I have a kind of funny feeling that there are some ‘mismatch’ between the election results on the one hand, and resolutions passed / debates during the assembly. The mismatches are, a) Nasharuddin 46% votes vs Nizar 85% votes, yet Husam lose b) delegates overwhelming support no talk with Umno yet, President and his deputy keep saying PAS should keep option open with Umno c) Nizar 85% votes, yet we see resolution passed to ban SIS d) Tok Guru Nik Aziz & delegates support for nothing to do with Umno, yet Nasharuddin said Tok Guru is not PAS. Elements of… Read more »

Well interpreting party election this way is wrong, it is a vote for individual, not a vote for a decision. The decision or policy made by PAS will be discuss in a meeting among top leader, where Husam used to be one.

This vote is to whom is more qualified to be their leader. Husam just doesn’t seem to have more supporter compare to even Nizar. Other issues are just last minute effort to get undecided member vote.

As at 2.12pm, June 7th, polls from this blog show 88% agreed Husam for vice president and 3% for Nasha.This polls I assumed comes from multi racial ‘voter’s’.This indicates the indirect distaste of PAS forming unity with UMNO.
PAS , listen with Islamic ears, not Malay ears as Non Malays dont respect Malays but Islam .Dont dissapoint them as it will destroy PAS, with UMNO waiting to pounce from behind !!!

PAS has shown its ‘hidden’Malay values when gaining power from the rakyat.They went back to their own PAS supporters but never convince the non-malays who vote for them due tot he fact the non-malays hate UMNO so much.Its like stabbing in the back by PAS…’tikam belakang’ ?

PAS never learned from their mistakes. Can a holy clean party propose marriage with dirty corrupt party? Does the leaders of Pas has the standard or intelligent quality to play with BN leaders. Jt look at Perak state, u can see how BN twist and plan their goal to achieve taking over the govt. I voted for PAS in the last election thinking they have changed their policy and be more liberal but with the party election result I see the party are going backward. I am a strong admirer of Tok Guru Nik Aziz. I hope the members of… Read more »

I think no one really understand PAS from the day of its inception. Umno, with the aid of BN parties had been using the media that controlled by them to the maximum, to demonise PAS and put fear in non-Muslim and at the same time, painted DAP as a Chinese chauvinist party to the Malays. But, with the emergence of internet and alternative media, these fears had been minimised, of course not yet eliminated totally since these demonisation was there in BN was formed. PAS’s victory in the last 308 GE has opened their eyes that, without the support of… Read more »

When PKR won the penanti election, the pro-unmo spinners say thar that the result is not representative for the electorate because less than 50% of registered voters cast their votes. Here anti-umno faction spins that nasharudin gets only 48% of the votes. Both divides same same. The more one spins the less i will support.

The PAS ulama must understand that the Chinese and Indians supported them in Mac 08 GE and also in the by-elections because they believe PAS leaders are not corrupt, unlike UMNO”s,where most of them are corrupt to the core. The PAS leaders must not misconstrue the fact. If PAS leaders insist on their own religious agenda and become over-zealous, then the voters will swing (afraid that these leaders have become the Talibans in Bolehland) and they will lose their ground. They must not forget their humiliating defeat in Terengganu when Hadi Awang and his government lost to UMNO. History can… Read more »

Umno has betrayed PAS before and PAS members know this better than all of us. I don’t think PAS will not jump straight into the Umno’s pond without serious thinking into this matter. Between PAS and Umno, my choice is still PAS irrespective of the outcome of its party election. Maybe the results may not work out as non-Muslim expectation, the fact that Nizar get the highest vote of 85%, which is higher than 46% vote of Nasharuddin, shows that PAS is still in the right direction. For those not satisfied with results, PAS is still a better party than… Read more »

YM Nizar, GODBLESS for your future TOP in pas !!

something to think about

We vote PAS because they are member of PR, but if they try to play double crossing by eating two sides and working with UMNO, surely we will reject PAS and vote for others, remember PAS, we can vote you, we also can reject you, the choise is in our hand ! Hope PAS understand that, to finish BN, we are willing to vote any party even MIC if they are in PR, but if PAS want to play double faces, then we also can pack you with UMNO ! Think it over !

its you lot that are bias everytime a result does not go your way…. Be realistic la.. Husam’s vote is just slightly above Mat Sabu’s, so how come Mat Sabu can be simply branded as a spoiler.

The reality is, although cleaner, PAS is significantly more conservative than UMNO in many aspects and people should recognise that.

what is the problem with unity govt? it is between PR-BN and not PAS-UMNO for goodness sake!

ideally Unity Govt must come from Pakatan Rakyat. It should not be compromised at this stage after all the hope time effort & support from the non muslims. PAS is riding of the wave of their support and would continue to garner more if they STOP having this uncomfortable talks wt the racist Enemy !
We have spoken Bros

85% votes the Nizar obtained is a testimony of PAS is heading for a more inclusive Malaysian Malaysia. Nasharrudin’s victory is not unexpected at all if we see from hindsight. PAS members are supposedly ulama (ie religious scholar) in majority. Ulama votes in favour of ulama is understandable (46% votes), but Ulama votes for non-ulama (ie technocrat) is just overwhelming (85%) and most welcome by all Malaysians. This result also shows that maturity in mindset of PAS members and that ulama’s contributions are appreciated. Tok Guru Nik Aziz is an ulama himself, but he favours technocrat. This shows that Nik… Read more »

With capable potential leaders like Husam Musa, Nizar and some young turks emerging, PAS will have a future….the transition must be encouraged by non-muslims and the old gurads must be allowed to slowly fade away…”Rome was not build in a day!”

Mat Sabu was a spoiler alright, he should have pulled out of the contest but even then that does not mean Husam Musa would get all his votes. Let’s not be too quick to judge the result at face value.

Yes I agree with ‘wandererAUS’, don’t throw away this fine opportunity! If Hadi Awang and Nashrudin truly have the party’s interest at heart, they should be alert 24/7 for UMNO implants amongst them out to create problems, distrust and animosity within the PAS and Pakatan Rakyat. They should come out clean to reject UMNO and cease playing games with them!

I hope I am wrong here to say that The Malaysian Insider reporting can be biased sometime. For instance, the win of Nasharuddin was fast interpreted as a triumph for the pro-Umno faction in Pas and a blow for Pas’ Pakatan partners.

The Malaysian Insider has its right in airing its reporting and opinion in the spirit of press freedom, but to earn the respect equivalent to Malaysiakini, MI still has long way to go.

Ironically, readers know who are behind Malaysiakini, but not MI.

If PAS forms an alliance with UMNO then in my area where PAS is contesting I will vote for UMNO and I will tell everyone I know to vote for UMNO when given a choice between PAS and UMNO. Why take such drastic action you say?

Because betrayal have to be answered and betrayers must be ruthlessly crushed. We must send a signal that we will not tolerate any betrayers whether they be from PR of BN. Mark my words, betrayers.

The wind of change is indeed flowing strongly in the right direction for PAS…to be more acceptable to all Malaysians… disengagement with UMNO solely
because, of a same race but, with different political ideolgies. It is time, they should have the courage to take on this new challenge… coming out of their cocoons
…no political party can survive very long based on religion or race in a multi racial and multi religious country.
Non malays and non muslims are beginning to feel comfortable with
PAS, don’t throw this fine opportunity away…if the party wishes to be countered!

If PAS start again the talk about unity Govt…all the rakyat will all reject PAs AND UMNO WILL BE GRINNING COS THEIR PLAN WORKED. PAS MISSED THE OPPORTUNITY OF BECOMING A NEW POLITICAL STAR IN MALAYSIA. SUCH A PITY.