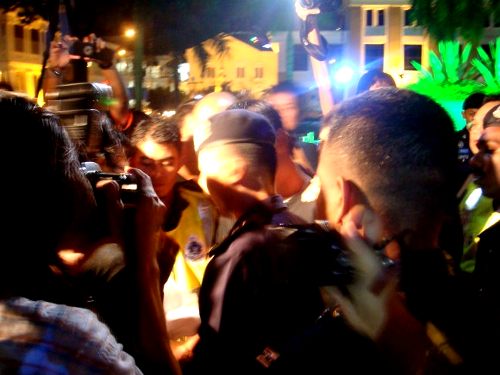 Police moved in on the vigil in Penang – Photo by Romerz

Fourteen people were arrested in Brickfields tonight at a vigil to express solidarity with activist Wong Chin Huat.

Of the 14, seven of them were from the students’ movement Dema and two from the KL Selangor Chinese Assembly Hall youth section. They are now at a car-park at the Brickfields police stations, though their statements have not yet been recorded. The arrests today come on the heels of 14 arrests last night (though that batch were later released).

Over in Penang, USM masters student Ng Eng Kiat was detained after a “Democracy First” vigil in Penang attended by between 50 and a hundred people outside the Dewan Sri Pinang tonight. He was the emcee of the event.

The Penang vigil, organised by human rights group Suaram, was to express dissatisfaction over the state of democracy in the country. It is not clear what charge he has been arrested under. Eng Kiat, who is also a Suaram member, is now believed to be at the Patani Road police station. About a dozen police also moved in to remove banners.

We are getting a taste of what life is under Najib’s regime. Left, right and centre, seems like there is no safe ground for the many voice of conscience…. (Those in) UMNO realise the alternative could mean subjecting themselves to the rule of law. Quite obvious many are culpable from their years of wanton abuse of position to enrich UMNO(somewhat) and themselves. No doubt UMNO would sound out and play the race card to extremes. That said, our only salvation… would come from our Malay brethren(the non-UMNO faction). My gut feel indicate a not so comfy ride in the interim… Read more »

10 were arrested in Kuching.

Being a lousy photographer, you can get some of the lousy photos I took at the candlelight vigil at Dewan Sri Pinang.

Congrats on a job well done in Ipoh.

He was arrested under illegal gathering without permit section one seven six (or something like that).