We will be following what’s happening in and around the Perak State Assembly this morning. 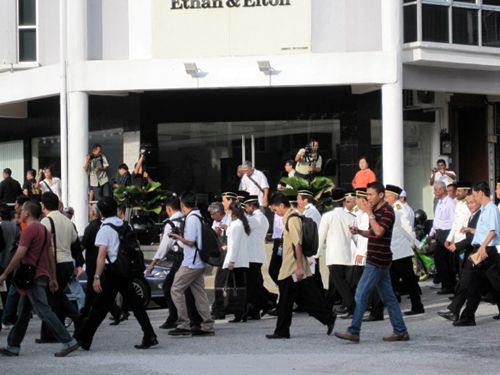 After the sitting this morning, Nizar walked up to where Ganesan was presiding in the Dewan and criticised him for allegedly allowing police “to intrude into the Dewan”, saying that as a lawyer, Ganesan should have known better. “You are a pengecut,” Nizar admonished Ganesan, who responded with a smile.

A source at the scene said he did not notice any uniformed police inside the Dewan itself although six to eight men in blue attire were stationed near the Speaker’s desk.

Ngeh later complained in a press conference about the heavy police presence at the Dewan, according to assembly member Idham Lim in his blog. Sivakumar, for his part, claimed that police tried to grab his shirt and bag but they failed, wrote Idham.

The ousted Speaker also expressed unhappiness that the media and bloggers were not allowed into the Dewan proper but confined to a viewing area.

I believe even the Communist China assembly give more freedom to the press and probably police are not allowed to have so much power as well especially on those elected rep.

To Gerakan K
Actually, it is okay to fight for more pay is okay but to give an AP to each reps that is out right bribes because that belongs to rakyat not any goons from any party.

Consider this AP as one of many perks.

why get irritated by a goon from BN, by the name of Gerakan K?

The Perak DUN is a farce. It is run by a bunch of illegals.

Nizar is our man. Check out below on Nizar for PM

Gerakan K,
You must have graduated from the University of Timbucktoo !!!
Didnt The Haram MB too fought for the MB post? So he too need to be labeled as such?
Remember Zambry wasnt elected by the Rakyat…Nizar was….the 3 frogs ie..Hee the BMW lover and the 2 China Dolls lovers were also elected on PR’s Tickets !
As for the Pangkor Assemblyman, he just won on the TLDM/Navy votes…! hahaha

Majority rules. Zambry needed to defend the system of democracy. Frogs or not these three are legitimate ADUNs that have supported BN. Can you count or not Devan ???

p/s: what is the problem that TLDM/Navy had supported Zambry ??? They are our people too.

“Majority rules. Zambry needed to defend the system of democracy.” No, you’re completely confused*. Mahathir was too when he said something similar recently. Democracy is “rule by the people”, not “rule by the majority”. In certain circumstances, democracy _can_ be similar to rule by the majority, but only when one party is far more popular than any others, or when there are two or fewer parties. Even in those circumstances, if not all voters vote then you’re likely to have “rule by majority _vote_”. The majority may in fact be made up of opposition voters and the apathetic. I’m fairly… Read more »

I confused with your heavy spin. Thanks for supporting Zambry as the legitimate Perak MB.

BN Haram Speaker not even voted in by the electorates
protected by 6sergeants-at-arms in front of Speaker’s chair…what a blooming fuss, what a blooming DEMOCRACY UMNO practiced…protecting their shameless…!

Yes, Nizar is a TRUE gentleman in the true sense of the word. From now till the next GE13, Nizar and all his PR team must conduct yourselves in the most dignified and magnanimous manner to REBUILD your somewhat “bruised” image and reputation. Just QUIETLY do the basic needfull in the Assembly but GO ALL OUT ON THE GROUND to win the hearts and minds of the Rakyat, especially the rural Malay folk. All the best & good luck !

My respect for Nizar grows even more. What principles and courage it must have taken for him to be able to have fought a good fight for the rakyat, yet be honourable enough to accept the Federal Court’s decision no matter how wrong we think it is… it is a matter of time, YAB, before you are reinstated to your rightful position as the MB of the rakyat of Perak. God knows best.

He fight for the post’s salary and perks. Some may say this as power crazy.

Are you mad? Zambry and BN are power crazy…please get your brains checked for any deficiency.