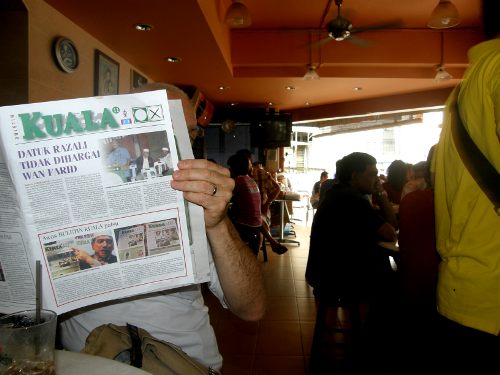 1100: We return to the same cafe where we had roti paun yesterday. This seems to be a happening place. Seated at the table by the entrace, a couple of Pas volunteers are working on a laptop. They have also blown small green Pas balloons which bob around.

Inside the crowded cafe, the sound of chatter fills the air. People are reading the Chinese newspapers. At a table near us, a Chinese guy is looking at the front page of the latest Suara Keadilan, with the headline “Najib bohong” about the Permatang Pauh pledges.

Next to us, a group of young Chinese election volunteers are having breakfast.

This time, we are having char siew pau and black bean pau, along with local iced coffee.

A Pas guy, wearing a Free Palestine T-shirt, walks around distributing a special edition of Kuala, the Terengganu Pas newsletter. The front page highlights the existence of a fake version of the paper that has smeared the Pas candidate.

The mainstream media, on the other hand, are talking of a late swing in favour of the BN, with a last-minute push by BN big-guns influencing Malay voters on the fence.  DAP activists say they have been distributing the Rocket, PKR workers the Suara Keadilan, Pas volunteers Harakah, while the BN folks have been handing out…. Utusan Malaysia!

A retired government servant ambles up to say hello. We exchange pleasantries and I ask him about his impression of the election campaign so far.

“From my contacts in government, I hear that the tide has turned in the last two days towards the BN, giving it a slight edge. Before that, Pas had the edge. Now they tell me that many Chinese shopowners in town have shuttered their shops as they are being harassed by different teams of opposition campaigners unlike the BN, which has just one team going around.”

But then, he adds, “Deep down though, I believe the Pas candidate has the edge.”

DAP volunteers in the coffee-shop tell me that the PKR’s dinner at the Ocean restaurant last night was hugely successful, with Anwar in his element. PKR party workers distributed membership forms to the crowd and they are confident that the majority of the Chinese vote are in the bag.

Raja Petra has also been in town, and, I am told, is a “tourist attraction” in his own right while Zaid Ibrahim has also been a hit as a speaker.

I look around again. At another table near me, another Chinese gentleman is reading the front-page of Kuala, the Pas newsletter.

On our way out, the Pas volunteer at the laptop cautions us that Kuala Terengganu cannot be compared to Permatang Pauh. “When the Permatang Pauh by-election was held, Penang was already under a Pakatan government and people felt less insecure about voting for Pakatan. Here, the BN is still ruling the state and the Chinese might be afraid of risking their businesses or losing their licences… This is a psy-war.”

“But,” he adds, “I believe more Malays are now behind us judging from the feedback we received during a ceramah held in a BN area.”

It’s now pouring again. Is an East Coast Monsoon about to strike?

… looks like a definite win for PAS. Conclusion to the comments made by supporters of the opposition: “We love the Opposition more – let it be PAS, PKR or DAP. It’s the Opposition that matters. No issues against the Opposition will sway our minds. We shall vote for the Opposition. And this time it so happens that it is PAS. We will vote for PAS.” I could observe the disenchanted looks among many BN supporters. Many have just given up. It reminds me again of what happened in Permatang Pauh where they abandoned the posts and left with disappointment.… Read more »

From now onwards the Rakyat should stay united in every corner of the country. From West to east, from North to south and across south China sea. With people’s power we shall ensure the PR will win every by-election and next election. With people power we will be able to abolish ISA and freed all the detainees, abolish all blood sucking tolls and IPP, thrown out all the wicked cronies, politicians, ineffective GLC CEO, government officers, ensure good quality education in all level, make sure university canteen catered for all races, abolish ill-fated Akta university dan kolej University,eliminate all the… Read more »

By reading all blog articles from several websites.. i can conclude that PAS will win by bigger majority.. great job Barisan Rakyat.. Also i have a chinese friend in KT who will be voting for PAS tomorrow.. according to her the talks bewteen all chinese voters there; they are fed up with UMNO/BN lies and bullying other races.. the solution for this is to vote any Pakatan Rakyat candidate.

hahahahaha…. utusan malaysia.
another humiliation for BN i guess..

2 interesting articles I have come across. Article 1 http://www.washingtonpost.com/wp-dyn/content/article/2009/01/10/AR2009011002236_2.html The article above (last paragraph on the 2nd has more details), indicates there is a network of companies in Malaysia aiding Iran to get banned US technology. Article 2 In a rather longish article in the New York Times, I came across a reference to a Malaysia company, … The relevant page is below. http://www.nytimes.com/2008/11/16/world/africa/16congo.html?pagewanted=4 on the 2nd last paragraph on this page, it implies that a Malaysian company is buying Tin from international brokers who source from the conflict zone in Congo. Further reference to Malaysian companies buying tin… Read more »

My take is PAS will lose by bigger margin this time. Bring on Anwar and the DAP bigwigs will not have much impact on the Muslim voters. In fact I predict UMNO to gain more Muslim votes. This can be seen from PAS’ statements coming out lately. But for PR losing the KT seat will not be their biggest problem as the by-election has exposed serious fault-lines that will be coming more and more visible over the coming weeks and months. PR needs by-elctions, BN blunders and national issues to keep them united. But if these are not happening, then… Read more »

“From my contacts in government, I hear that the tide has turned in the last two days towards the BN, giving it a slight edge. Before that, Pas had the edge. Now they tell me that many Chinese shopowners in town have shuttered their shops as they are being harassed by different teams of opposition campaigners unlike the BN, which has just one team going around.”

From the government? But he believes differently. Not enough info perhaps to convince him!?

I moved to what they call here Jalan Pulau Kambing… a group of people were expressing their girevances. A man commented on UMNO strategies and this was agreed by all who were present. Briefly, they were commenting on UMNO’s wrong strategies again and again : Using Saiful in Permatang Pauh backfired; Bringing Ezam and Nalla to Permatang Pauh backfired; Bringing in Ezam again to Kuala Terengganu spoiled the mood – the people just hate him, even among UMNO supporters; the choice of Farid as UMNO candidate is a mistake, they say; Farid’s ‘karaoke stint’ has spoilt his image among the… Read more »

Sitting in a small coffee shop in town… A man quipped, “ni bukan pilihan raya besor. Harga minyok turun, harga barang tok turun. Orang besor hidop mewoh, orang susoh kor susoh. Kita nok biar PAS menang. Biar tamboh kerusi lagi kak paliamen.” The big crowd here seemed to agree with him. Looks like, it’s more the trend of getting a stronger opposition in the parliament. The Palestinian issue now has touched the hearts of most Muslims here. PAS has used this effectively to win more sopport. The fence sitters will be drawn into PAS because of this. The oil royalty… Read more »

Also, can’t find you email address for correspondence or I have not look hard enough?

Saw a couple of headlines about problem with bee colony before,

Thought I leave this one here for you to have a look and maybe share your thought on it. Does Malaysia has this problem that we are not aware of?

Last week, I felt that PAS had the edge, but this week, looking around and hearing so many stories of how BN is ‘buying’ the hearts of voters in different ways, I can’t really be sure who will win. I hope that ultimately, the people will choose wisely and that the person elected, whoever he is will indeed be a man of his word and someone with a heart for the people.

go for hudud law.
only criminals fear hudud.
law abiding citizens like me have no fear whatsoever.
only people from BN (UMNO MCA MIC) fear becoz of you know what.

We need more by-elections (sorry for being cruel).

Just like what we saw in Permatang Pauh recently, the sentiment here is obviously in support of PAS – the Opposition. 8 out 10 people asked said that, “We want a stronger voice in the Parliament. Seemingly, BN is having an uphill task against the popular PAS candidate. UMNO’s candidate apparently is not popular even among many UMNO supporters. There are factions in UMNO here. Among the Chinese, many still felt hurt with the comment made by an UMNO man some time ago that “the Chinese are penumpang” in Malaysia. They generally feel that UMNO is not fair to them.… Read more »

Have spent last 3 days in KT, being a busybody. Have talk to several people in Kampong Cina, they have either said 50:50 or too close to call. Have attended both PR and BN ceramahs, most of PR crowd were very committed supporters, gave rousing welcomes and very enthusiastic appreciations of speeches by RPK,ZI,LKS etc. AI gave an incredible speech last night at Ocean Restaurant, I think everybody there was bowled over by his eloquence, I clapped until my hands were sore. In contrast the crowd at the BN ceramah in Kampony Cina was very muted, you get the impression… Read more »

NEITHER TRICK NOR FEAR OF STICK

Purely out of compassion please do go and see Psychologist. Let see whether PAS wins the battle can cure your problems.

Hey ANIL, what about the independent candidate la . .. give him some coverage also la.. hehe

Yeah, Ezam the Clown just made my day…that “letter” he brandished is so trivial and at the same time vindictive.

It is final. PAS will win

According to KTs sentiment and the desperate action being taken BN Matilah, seeliao loh BN sudah Kalah lah. Najb will get a wake up call and BN machineries will be back to their drawing board. Good thing is UNMO will still be wondering what went wrong. Ha..Ha…Ha

PAS will win this one…. thanks to a man who demonstrated yet again he is full of hatred, vengeance and vindictiveness…. EZAM!

I have never trusted AI… His claim to have the number for the new government was never to be believed, from the beginning, and I was proven right.
Now he is playing with our desire to have UMNO thrown out and be replaced will prove to be another one of his bluffs.
He is the biggest bluffer in Malaysia politics at the moment just wait and see.