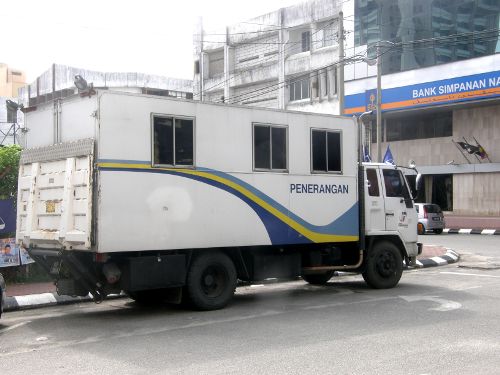 1030: We wake up a little late after last night’s late-night exertions and troop out to have some breakfast at a Chinese cafe nearby: they have run out of pau, so we sip coffee with Terengganu’s roti paun (little bun), which is toasted small rectangular bread loaf made up of four little buns with margarine inside. That should keep us going till lunch. This trip is turning out to be a gastronomic adventure as well!

On the way out, we spot a mysterious trailer from the Information Department parked not far away. High windows on each side, all heavily tinted. At the rear is a foldable pick up extension, which can be used for lifting heavy loads. What’s it doing here and what’s inside it, we wonder.

We walk further into the city centre, and a Malay gentleman walks up to us. He sounds a bit unstable but he is gentle and asks us if we would like to see a bit of the Terengganu heritage at the museum area around the corner.

We think it’s a ruse to get some money off us.

But then he asks us, “Do you have enough money?” Before we can say anything, he puts his hand in his pocket and whips out a couple of RM10 notes and says in English, “Here, take this.”

That’s a first: people offering you money on the streets. How kind of him. We politely decline, and then ask him about the election and who he thinks will win.

“Biru,” he says, “because you know why? The green has rarely won here.”

We walk further on and bump into D, the first of quite a few familiar faces we will meet on the streets.

D is one of the  new ‘Bangsa Malaysia’ folks who believes in a more inclusive nation. He had first met me while I was covering the Permatang Pauh by-election last August. He thinks it’s going to be a close contest.

Should have walked about before breakfast lah!

Then can have “roti paun”!

Back in Kuching “roti paun” is the “loaf” version, the old one “pound” bread loaf!

Do they have home made pandan “kaya” to go?

No doubt about it! PR will win! Even by a hair and recounts all night!

Yes, I think the roti paun here had kaya in it too! – Anil