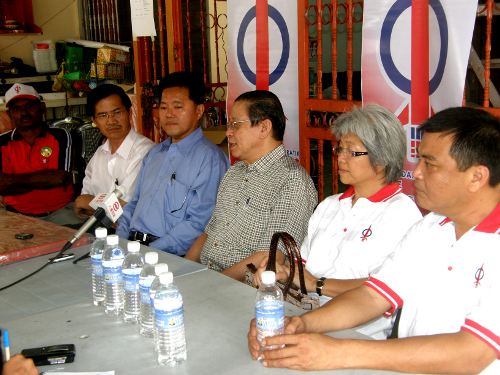 DAP leaders at a press conference this afternoon in KT

1400: The DAP holds a press conference to deflect criticism that its cooperation with Pas in the by-election is promoting Islamic hudud laws.

Kit Siang tells them the by-election is not about hudud, but about whether the momentum for political reform unleashed by the political tsunami can be extended to the East Coast. He is responding to the MCA’s demand that the DAP should apologise for promoting hudud through its cooperation with Pas. He points out it is the MCA which should apologise for the party’s record of abuse of power and undermining of democracy.

Kit Siang adds that the Chinese support is “encouraging”. The question now, he adds, is whether the Pas can hold its ground among the Malay voters.

A senior DAP party worker tells me the party is hoping to raise the number of votes it received from 20-30 per cent to 50-60 per cent, though close to 50 per cent might be a more realistic target. As there are about 9,000 Chinese voters in the constituency, and assuming that 7,000 of them turned out to vote, they are hoping to increase the votes they bag from over 1,00o votes to close to 3,000 votes, which could be enough to swing the election in favour of  Pakatan.

This is a by-election. It isn’t going to change the government which, by the way, does not truly represent all Malaysians. But it sends a signal. Meanwhile, what truly represents all Malaysians is the ferment that has been going on now for a while — it’s that movement of Malaysians. …I have faith that this fractious, argumentative movement of Malaysians is preferable to the stupor we were in under Umno/BN and do not wish to return to that stupor.

I have been watching the situation in KT… IMHO I think the KT Chinese are in a real sticky situation…
If they vote UMNO, their live will not change for the better. If they swing towards Pakatan this time, the risk is very real that they will lose their land/houses… we know how vindictive the BN/UMNO are, what more that ahmad said! “Lu tak baik sama saya, saya sepiluh kali tak baik sama lu” so I heard…