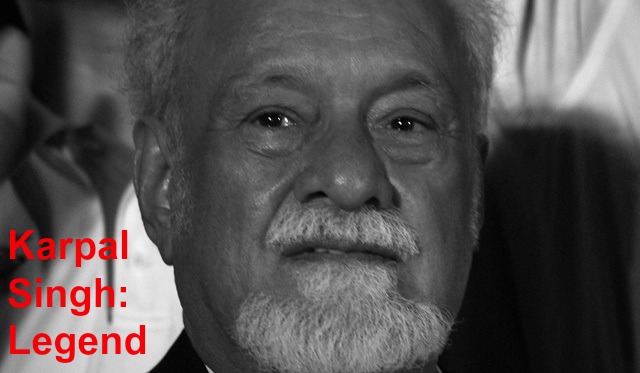 The word legend is often lightly bandied about. But Karpal Singh will go down in the annals of Malaysian history as one of the rare legends – a fighter of a politician and brilliant lawyer who championed the democratic rights of Malaysians and took up a string of lost causes in the criminal justice system.

Karpal and his personal assistant, Michael Cornelius Jayakrishnan, were killed in a road accident near Tapah this morning. An Indonesian domestic worker in the car was seriously injured. Son Ramkarpal was also in the car driven by C Selvam when it collided with a lorry.

Phone calls and text messages have been flying around all morning since the early hours of dawn; for many, the loss is personal, even if they had not known the man personally. It is a measure of the impact the Tiger of Jelutong – an icon of Penang – had on the nation that a deep and gnawing sense of loss, even among those who have little time for politics, has spread like wildfire across the nation.

The son of a watchman, Karpal played a vigilant sentinel’s role in watching over the constitutional rights of Malaysians.

His clients in court ranged from his one-time adversary, Anwar Ibrahim, to a 14-year-old boy sentenced to death for possession of firearms in a politically explosive case.

The old Xaverian’s contribution to the cause of democracy in Malaysia defies description and could fill a book thicker than a voluminous law tome. A descendant of a family of wheat farmers in the Punjab, the Penang-born Karpal has left behind a rich harvest to inspire future generations of Malaysians.

The sedition conviction he was slapped with – one of the many obstacles strewn in his path – is now moot. In death, he has won his eternal freedom. Once again, he has defied the odds – this time, through his passing, his last hurrah.

In the forefront of the struggle, Karpal never found it plain sailing as the nation’s turbulent post-independence journey threw up one challenge after another. As student union president at the University of Singapore, he was banned from the hostel for his activities. He took seven years to finish his law degree and, after failing his final year, the dean, Tommy Koh, forced him to sit at the front of the class with him. “So I couldn’t play the fool any more and I passed my exams accordingly!” he recalled.

Joining the DAP in the aftermath of the May 13 politically inspired violence, he took obstacles in his stride, gliding through events with dogged courage as his own life-story mirrored the nation’s travails. In his prime, he was detained under the draconian ISA from October 1987 to January 1989, as darkness fell on the nation. Briefly released in March 1988 following a habeas corpus application, he found himself promptly rearrested and detained again hours later. This sordid saga took place under the administration of the authoritarian Mahathir, to whom Karpal would remain a prickly thorn in the side, a combative opponent who just refused to yield, where others were brusquely brushed aside.

Karpal emerged from incarceration with his spirit intact, refusing to succumb. A tragic car accident that later left him confined to a wheelchair failed to diminish his indomitable spirit.

His untimely death has reopened and magnified the wounds of sorrow across the nation so recently felt after the demise of Irene Fernandez and Bernard Khoo.

For far too long, we have left it to the likes of Karpal and Irene to speak up for the rights of the oppressed. Now it is time for us to step up to the plate and do our own bit to carry on their legacy. We owe it to them to continue the struggle.

Lawyers and parliamentarians like Karpal Singh come one in a million.

Thank you for all the services to the country in the cause of justice, fair-play, human rights, and human decency, and above all for being a tenacious fighter to uphold the rule of law.

Let the law take its course. You do Karpal no favours by being a judge jury and executioner of the other side because he did not have pedigree, social status or high profile like the other victims. Is that what Karpal stood for?

His fight in life is not finished so let his death be an inspiration to bring in more ‘Karpals’ and will not let his fight for freedom be discontinued !

Yes, as Mr Karpal himself would say, carry on.

Anil,
Do include CNN talk asia interview with Karpal Singh

I believe though officially singapore government denied him the right to represent 4 muslims over the scarves issue. Privately they are very proud of the tiger that Singapore has nurtured, Tommy Koh should be extremely proud of him.
Another tribute to Karpal Singh

Singh is King & King is singh

That is why we put him there. It is sad indeed. The country has lost a voice in Parliament.

Karpal Is truly a rare legend in Malaysian history.
A man of direct honest words and honour & integrity which is a rare thing among politicians.
His departure will leave a vacuum in the Malaysian upside down law system.
Truly hope his sons will remain strong and to continue Karpal’s sterling legacy.
Condolences to Sir Karpal’s family and to the family of Mr.Michael Cornelius

Karpal in parliament on 8 April:
http://www.youtube.com/watch?v=NB4XAlaL-8k&list=UUWugHZOiURon5xPHgNUj4ew

May all the angels surround you mr. Karpal and Michael
My deepest condolences to the families.

A great example for the nation, a warrior is back to heaven
He paved the road. He showed the path…..the path of love, peace and justice
Step on the path he paved for you!

This is so beautifully succinct of Karpal Singh’s indefatigable struggle for justice. You’ve made a pertinent point that each of us need to step up, speak out if we care. We’ve lost two icons in the space of few weeks.

The multitude of Malaysians who feel this loss so personally and who looked up to Karpal as our champion of a fair, just Malaysia makes a sick joke of the sedition charge.

R.I.P., Our All Malaysian Democracy Hero!!!

A lorry driver that did not signal – UMNO/BN and Mahathir’s has Karpal’s blood on them as far as I am concern. Their ideas, attitude, policies led to these things and kills. If LKY had ran this country, not only would Karpal be alived, he would not be in a wheelchair in the first place.

To all of us…..the quiet and silent majority…….you can never know the awed respect and admiration we always have for you Mr. Kapal Singh. We are deeply sad and sorry. You are truly, a son of the soil………..A MALAYSIAN…….. A FIRST CLASS MALAYSIAN.

The spirit of Jelutong tiger lives on for us to continue the fight for justice.

Anil,
I am sadden over the passing of Karpal Singh. He’s truly the spirit of DAP so to speak. Just like Paul in the new testament, he joined DAP when all the original DAP initiators had left thanks to Tunku. One of them is Devan Nair. Karpal has carried DAP torch. He’s not just the standard bearer but a pole bearer too of DAP. Tribute song to Karpal singh

You forget P Patto, the other giant of DAP.

In death shall the spirit of the Tiger of Jelutong prevails over the injustice that have been cruelly imposed on Malaysians all these 50 years & its left to sane Malaysians to carry the torch for a fair & compassionate society. R.I.P ! From your admirer!

RIP A true VIP who upholds justice regardless of race, language or religion.

I wonder if tonight’s Himpunan Reformasi 2.0 at Tapak Expo Seberang Jaya will be of special significance in honour of YB Karpal Singh.

wonder what is left for this nation now with the demise of Karpal, the man tirelessly fought for justice even in his wheelchair…

he puts all the kangkong ministers into shame !!!

deepest condolences to the families of Karpal n Michael, rest in peace!!!

We lost a Penang tiger, Tiger of Jelutong.
We lost a fighter for justice, a fighter against the corrupts, a fighter for the weak & the legal law-illiterates.
We lost a consistent politician who has no fear or favours but a human conscience in his brave soul.
We lost a Malaysian, a Penang Lang, a Sikh (a legacy of the braves in Malaysian military, police & courts of legal justice).

Not to forget Mr Michael Cornelius, an unassuming gentleman who served his boss well.

RIP, Michael.
Condolences to your beloved family in India.

This is sad news.
My condolences to Karpal’s and Michael’s family.
You are right Anil, it’s time we start speaking up for ourselves. Loss is only felt when the person is no longer here, otherwise we are so content in our comfort zones we take things for granted.

One is too shocked to say anything……we, my Brisbane family and I are so very sad….

We lost a statesman and lawmaker who fight for the rights of Malaysians without fear or favour. Condolences to the bereaved family during this trying period. Your name and sacrifices will always be remembered in the history of Malaysia. RIP.