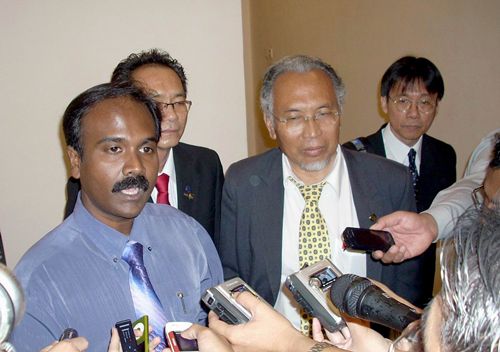 Sivakumar (left) speaking to the press after the court decision this afternoon. His lawyer, Mohd Asri Osman, is in the centre and on the right is lead counsel Chan Kok Keong. – Photo by Kinta Kid

Although the court dismissed the injunction with respect to tomorrow’s sitting of the State Assembly, the judicial commissioner fixed 1 Oct for the application for the injunction to be heard.

1632: The Pakatan side has failed to get the injunction they were seeking on the grounds that the application was made too late, according to another contact at the scene.

1612: All the main points have been submitted and Judicial Commissioner Tarmizi Abd Rahman is now deliberating, according to a contact. The Pakatan side wants him to decide if the State Secretary, as a civil servant, has the power to block a State Assembly sitting; it wants an injunction to be issued against him.

1515: While the BN federal government appears to have put Pakatan-ruled Selangor in its cross hairs, the Pakatan is going on the offensive in Perak after having been ousted from power there by the BN.

Sivakumar is seeking an injunction to preventing State Secretary Dr Abdul Rahman Hisham from blocking the entrance to the State Assembly, which is located within the State Secretariat complex in Ipoh.

Im getting more hate to BN today. More than ever. And I do believe more peoples too.

The Judicial Commisioner is not addressing the main issue in the law, but that is to be expected.

As long as the PR keeps the issue in public focus, people will remember.

And who knows, in the next 12 months, there may be by-elections in Perak and those will really be well fought by both sides.

Dear Anil,
Apperently, the PR (Pembangkang Rakyat)cannot count.
They do not know how many ADUNs they have.
They still think they have the majority.
This is the Specialty of the PR. To create chaos and disturbance, instead of looking after the Rakyat in their DUNs.
How sad!

Tell me of anything new. Let us refresh ourselves with the speed the injunction zambry had when nizar was declared mb. Filing was made at abt 9 am the verdict is out at abt noon….

najib will make sure that Perak remians under the control of BN. laws? what laws…

Don’t worry PAKATAN. The people are with you. The Merdeka celebration in Perak was not a successful one. It was dull. This shows how much the people want PAKATAN to rule the state.BN has to realise this.Go back to the people and let them decide.

AS expected!!! Wait for the 13 th election then we can wipe them out completely

Whatever the outcome of the court, PR did a good job by keeping the Perak fiasco alive. We dont expect any court in Malaysia to give favourable judgement to any PR case but what we want is for PR to keep on reminding the Rakyat of all the BN wrongdoings until the coming 13th General Election. Yes…Keep the fire burning…..

There was a injunction for BN within a day.For PR until KINGDOM comes with PDRM<MACC<COURT will never be in their fauour.ASK ONE MALAYSIA FOR A SNAP ELECTION.He knows well enough He will be a born loser from then on.PR should go on this trend on and on As Time passes the presure will presue stronger.PR The in fightings,Do not raise issue of Race,religion.Just presue with a Vision GE13.Stay forcus. Shift your forcus on trengganu.Maybe can get the BN to jump.Let them feel the dose of their own doings.

The outcome is very normal and expected. Who is the PM? Which political party is more powerful? No money and no power, no need to talk. That is life in Bolehland unless we are prepared for the CHANGE. NOTHING CHANGES NOTHING CHANGES.

Its expected anyway…Its good. Lets the whole world have a good laugh ate our nations Police, MACC and Judiciary.

If the decision is based on grounds that the application was submitted too late, then it leaves a bad taste and the perception that the judiciary is neither impartial nor independent is further entrenched in the minds of any right thinking Malaysian. By the way, was it Merdeka celebrations yesterday, hmmm…

It looks like a loosing battle…. Only by going back to the people via election will this issue be resolved. Would BN dare. They wouldn’t because they know they will loose much more seats than they have now.

If no timeframe for each application to be carried out, all open to abuse. Too late for Pakatan but never too late for BN?

BN/ UMNO tak tau malu. LDP Jepun sudah runtuh. Barang Naik (BN) will be the next one to go….