Political cartoonist Zunar has been brought to court in Penang for a remand application hearing.

Winner of multiple international awards for his courage as a cartoonist, he was held overnight at the North East District Police Station in Penang Island after his arrest yesterday evening, a day after an Umno-led mob had disrupted his exhibition in Komtar.

His displays in Komtar have been confiscated and he is now under investigation for sedition and under the Penal Code. This was one of the displays – about the RM2.6bn case – carted into a police jeep:

One onlooker shouted at him, “Keep your spirits up!”

He may be released today, hopefully. But it looks like he could be charged with sedition and under the Penal Code section 504. 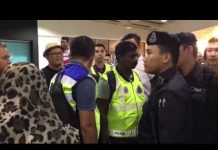 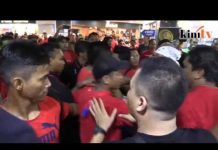 LOKAP – by Namewee (A song about Lock-Up in Malaysia）

Accidentally found out one must have an email account to sign this petition & be verified instantly.
It’s FREE to sign even though our exchange rate is now Rm4.47 / USD

We should respond by boycotting those pro Umno nasi kandar in Penang. Thumbs up if you agree.

May you win MORE international awards for your courage as a Malaysian cartoonist.
We all love you for what you are.