Three people were reportedly injured in the police action at a Pakatan ceramah yesterday. 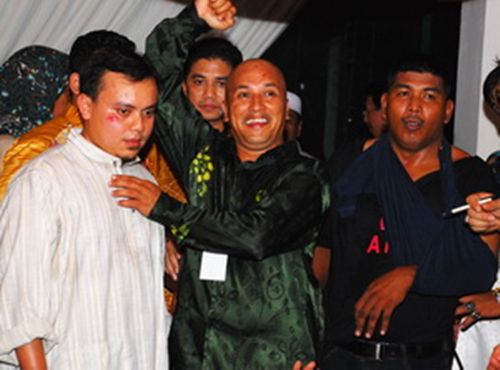 The three, who were members of a Keadilan youth squad, were reportedly hurt when police disrupted the Pakatan ceramah and forced it to move indoors.

O,
Exactly! These UMNO cybertroopers brain are located in the $$$ pouches which are larger and heavier than the size of the individual brain itself, and hence their mutated intelligence, merely serve to fulfil their struggle for personal enrichment and selfishness.

They asked , “mana lu punya otak”??? because, it never occurred to them, that the brain should be located inside the head of every human.

Amir, what a pity to have an intellect like you who failed to see and understand the true plight of the masses beyond the truth. By the way, person of your intelligence and calibre should know where the brain is, but it may not necessarily be the specific answer to the other persons mind. Do you get it????????

What an ANSWER!!! Are you saying the specific answer to where your mind is DOWN UNDER??? Hahahahahaha!!!…

Do you think it is located in the toe? Pea sized? LOL! This is another product of BTN!

Kannu, do you believe those BN ceramahs have permits? How come PR ceramahs, permits not given? Even, if BN ceramahs do not have permits, they will say they do, simple for them, just walk into any police station and get one immediaetely, anything goes in Bolehland! Just vote PR and continue to canvass and work for PR, otherwise Zimbabwe awaits!
All the best bro!

thanks for your brilliant comments. No chance for these cheerleaders to fight back !!!

Dear Amir and Kian Ye,
Your unscrupulous response to the issue is much more damaging and injurious to your own personality and conscience than to the injured.

They don’t like another drama after third voting drama directed by Lim (the Oscar wannabe).

My comments are purely based on how the TRUTH.

Pakatan Rakyat is ABUSING & MAKING USE of your LOW INTELLIGENCE to BRAIN WASH you into believing whatever they say & do are CORRECT.

Hey Amir,
Looks like you are the one who got brain washed….

I see we have some fearless pahlawan here that knows only physical fight. I think the ‘heboh’ here is for the abuse of power and not how bad someone is injured. Very bad things usually happened behind close doors and we really don’t know what happened. Nothing to heboh if PDRM disrupt both PR and BN’s gathering. Rakyat pay PDRM’s salary so everyone have the right to complain about them especially if they seem to abuse their power which is clearly the case here.

The POLICE abuse their POWER??? I assume you must be still a KID to understand ADULT topics.

The gathering was a PUBLIC GATHERING & there was no POLICE PERMIT given. So, for the POLICE to move-in can only be deemed ACCEPTABLE & APPROPRIATE.

If a group of NUISANCE were to go to the PALACE to criticize the SULTAN and when the POLICE move-in & manhandle these NUISANCE……does it consider as ABUSE OF POWER??? Grow up lah, bro!!!

Can you blame them Daryl? When they had been brain washed by the BTN and now championed by the useless, so claimed, champion of Islam/Malays, PERKASA?

Dear Anil,
Everyone is so Cheerful in the picture!!!
Must be a very good take!!!

Did the Pembangkang Rakyat (PR) Supporters took it literally in their slogan, Lawan tetap Lawan, against the Authorities???

Lawan tetap lawan – but instead of lawan, UMNO sends in their clowns, the police….

Imagine if the CLOWNS can make Pakatan Rakyat supporters hide like COWARDS when they CLOWNS moves in…..

umno supporterts don’t have the … to move in. They are cowards that’s why they use (perkudakan) the polis to do the dirty job for them. Itu pun kamu tak boleh fikirkah?

However, it’s true in some ways. Afterall, if you wish to fight…be prepared to get injured. If you don’t wanna get injured, then please stay at home & play Congkak or Chess.

Kian Kee and Amir,
Does this happens during an UMNO gathering???…

Becos’ UMNO always get a POLICE PERMIT before having whatsoever PUBLIC GATHERINGS. They play by the LAW & ORDER unlike PAKATAN RAKYAT.

Because you are what you said! Period!

The guys who posted comments have lost the script. If you get into a scrape like this, your recourse is to go to the police for resolution and protection.
But if it is the police itself doing this to you, where do you go for redress?

And another UMNO Baru ceramah in Gombak was allowed to proceed. There they were spewing racist remarks and stoking racial tensions, but, what did the PRDM do? Nothing!

Lawan Tetap Lawan, but fight it fair! Why scared? Pengecut? UMNO is shivering … in the pants, as PKR despite UMNO/BN desperate attempts to break it, is getting stronger as shown by the support of the Malays. If UMNO/BN has the guts, let the ceramah tomorrow and celebration in Negri 9 to proceed without interruptions! Malaysians, let us just watch what UMNO/BN pengecut will do to the PR ceramah tomorrow! Shameless pengecut!

Grow up, guys!!! Let’s NOT bitch about such a small thing.

It’s just a small scratch here & there. Typically HARMLESS. A bee sting is perhaps much more painful than what those 3 dudes suffered.

Waste of time complaining & making a HOO-HA over it.

You are being irresponsible! Broken hands, small issue?

Did you say IRRESPONSIBLE to Kian Ye???

Come on’!!! The IRRESPONSIBLE ones are those three dudes who got so-called INJURED (I’ll rather call it MINOR CUTS instead).

It’s clear that the event has NO POLICE PERMIT & yet they attended it. So, these 3 BLOKES should blame themselves for being IRRESPONSIBLE instead.

Dear Kian Ye….no need to answer SMALL KIDS question, ok? I have answered them for you. Thank me later. Cheers!