Several elected reps and activists joined in with a group of USM students to stage a protest against the Sedition Act and to express support for law professor Azmi Sharom during a lunch-time gathering at USM. 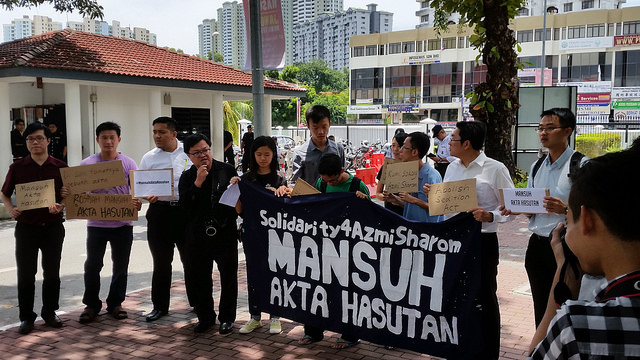 The gathering was held just inside the Jalan Sungai Dua entrance to the USM campus under the watchful eyes of campus security, a handful of uniformed police, plainclothes police and reporters including Malaysiakini’s Susan Loone, who herself is being investigated for sedition.

Judging from conversations, a group of postgraduate students was apparently warned – during a briefing by one of the deans last week – “not to get involved in politics”. One wonders what USM’s definition of ‘politics’ is.

Incidentally, USM is helmed by the brother of the local chairman of Umno.

Still, this was a marked improvement from previous gatherings at Jalan Sungai Dua. During the reformasi era, Light Strike Force personnel showed up to disperse students. At another gathering a few years ago, a group showed up and tried to intimidate demonstrators.

This time, the gathering ended without incident.

Meanwhile hundreds staged a simultaneous protest at the University of Malaya today at the same time.

UPSR Sains exam paper bocor?
How could this be happening?
Who should be accountable?

Earlier complaints on the existence of such leakages in previous public school exams were brushed off by the authorities, effectively as ‘prodigious predictive skills of some students, teachers or tuition centres’. The denial syndrome among the higher echelons which breeds lackadaisical attitude among the ranks and files eventually bring about this embarrassing episode.

Likewise, merely silencing critics with the draconian laws would not stave off or diffuse any future embarrassments, scandals or even crises but instead allow them to fester before blowing up on the faces of those in charge right up to the highest leadership.

Pictures tell a lot and the truth. When there is no picture the comments will be that there are thousand and hundred and comprises various races. Who do I see and what are they comprise of. And we see nothing but one opposition leader organizing the pack. I wonder whether these few guys are from the USM or pick by this leader to come here. To be exact only 11 including the opposition head

Shame on you, Yang !